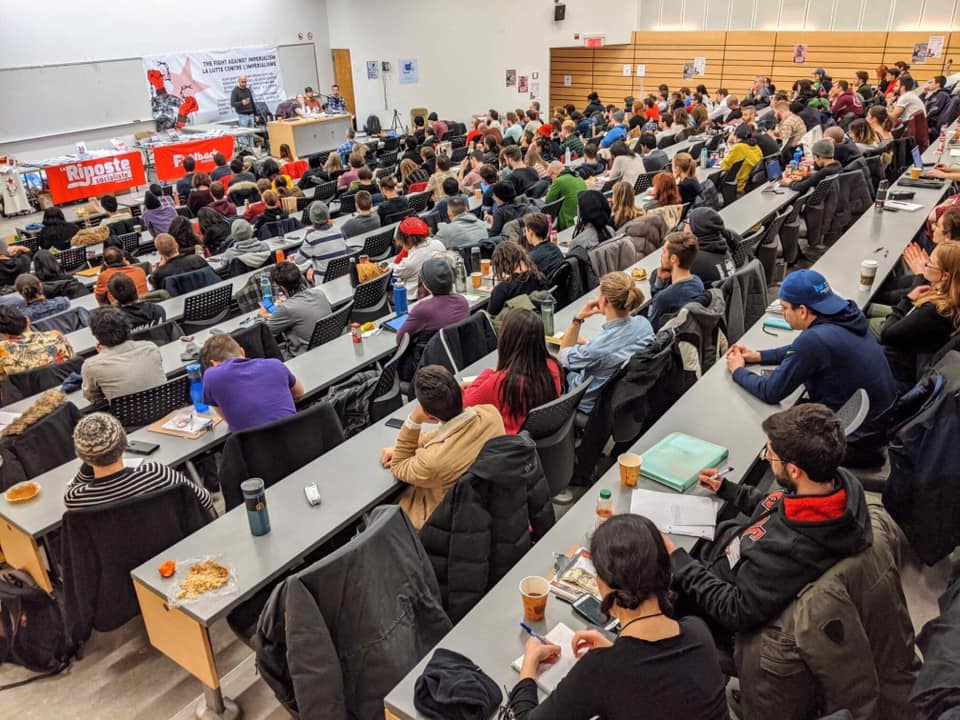 The annual Montreal Marxist Winter School was a resounding success, once again breaking the participation record. More than 250 people registered for the school, which took place on the weekend of February 15-16 and marked the 10th anniversary of this yearly event. People came from all over Canada and the United States to participate in what has become the largest Marxist gathering in Canada.

The theme of this year’s school was “The Fight Against Imperialism.” This focus could not have been more timely, as the Indigenous people of Wet’suwet’en are waging a courageous fight against the Canadian state and the oil barons and as the conflict between the U.S. and Iran is heating up. The weekend was great educational experience for people to broaden their knowledge and discuss how to put an end to decades of imperialist oppression and exploitation.

Iran and the conflict in the Middle East

Starting off the school, In Defense of Marxism editor Hamid Alizadeh presented on Iran and the conflict in the Middle East. Hamid outlined the history of the conflict which led to the assassination of Iranian general Qasem Soleimani, carried out by the United States in Iraq earlier this year. He described the revolutionary movements breaking out across the region in Lebanon, Iraq and Iran and the deeply unpopular nature of these regimes. Hamid explained that it is the primary duty of revolutionaries in imperialist countries like Canada and the United States to oppose imperialist meddling in the region which, far from weakening the reactionary Iranian regime, actually strengthens it.

The area where the crisis in the Middle East expresses itself in the most brutal fashion is in Israel-Palestine. In order to understand this conflict better, the school had a session on “The Socialist Solution to the Israel-Palestine Conflict” with Fightback/La Riposte socialiste editor Joel Bergman presenting on the question. He started by talking about how U.S. President Donald Trump is throwing fuel on the fire of an already inflamed situation with his so-called “Peace Plan for the Middle East.” Joel went into the history of the conflict, starting with the rise of Zionism, the divide-and-rule tactics of the British imperialists and the bloody Nakba (from the Arabic term for the 1948 Palestinian exodus, al-Nakbah, meaning “catastrophe”) that marked the foundation of the Israeli state. Joel then provided a Marxist analysis of the different forms of Palestinian resistance over the years finishing by explaining that what we need is a new intifada, on the lines of 1987, but this time with a Marxist leadership appealing across the national divide, to split the Israeli working class away from the Zionists and build a socialist federation of all peoples in the Middle East.

The school also took time to discuss the history of the colonial revolutions which shook the world following the Second World War. Erik Demeester, editor of the Belgian Marxist newspaper Révolution, presented a Marxist analysis of this question, drawing out the lessons for the struggles against imperialism today. One major point Erik highlighted is that the bourgeoisie in the colonial and ex-colonial countries arrived too late on the scene of history and is tied hand and foot to imperialism. This means that they are incapable of playing a revolutionary role or carrying out any of the tasks of the national democratic revolution. With a wave of revolts across the world in countries dominated by imperialism, this lesson maintains all of its relevance today. Any fight for democracy, agrarian reform or basic human rights must be led by the working class and must fight not only against the imperialists, but the local bourgeoisie who are just the local office boys of imperialism. 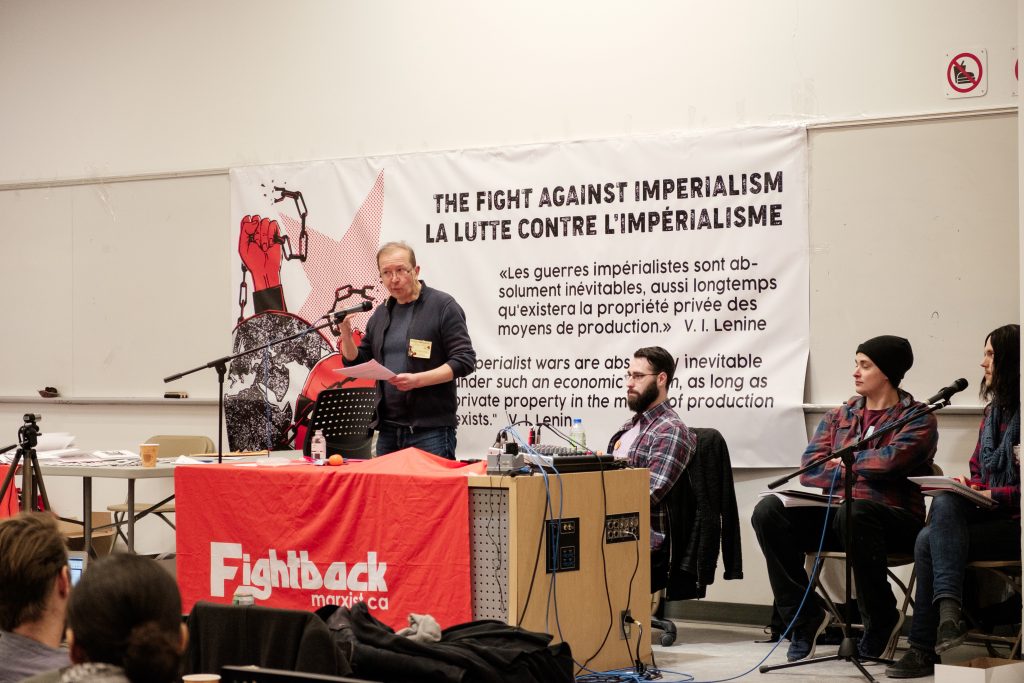 Within this wave of colonial revolutions, the Vietnam War stands out as one of the most brutal and heroic struggles against imperialism in recent history. There, poorly armed and starving peasants defeated the greatest imperialist power the world has ever known. One of the school’s sessions was devoted to this great event, with a presentation by Tom Trottier, editor of the U.S. newspaper Socialist Revolution. Tom explained how the heroic resistance of the Vietnamese, the anti-war movement in the U.S. itself, but also the demoralization and radicalization to the left within the U.S. military finally forced U.S. imperialism to retreat. More than 50 years later, U.S. imperialism is in an even deeper crisis than it was back then. With a war-weary population, defeats in the Middle East, and an economic crisis looming, radicalization to the left similar to what we saw in the 1960s and ’70s in the U.S. is certainly on the agenda for today.

On Sunday morning, the school held a discussion on Marxism and the Indigenous struggle in Canada, with a presentation by La Riposte socialiste editor Rob Lyon. Through a brief overview of the history of Indigenous oppression in this country, Rob showed how the oppression of Indigenous people is a fundamental feature of Canadian capitalism. He also explained that the “reconciliation” rhetoric put forward by the Liberals and others is a sham and that under capitalism, Indigenous rights will always come second to corporate interests. The growing awareness of this sham is best summed up by a slogan that has gained momentum since the beginning of the struggle in Wet’suwet’en territory: “Reconciliation is dead”.

The highlight of this session was certainly the contributions of indigenous comrades from La Riposte socialiste/Fightback. Comrade Darcy, from Edmonton, spoke about her family’s working-class roots and explained that she is tired of academics saying that the Indigenous struggle and the workers’ struggle are separate. “The ruling class trembles at the thought of a socialist Indigenous struggle. Their nightmare is working-class unity. To decolonize the world is to fight for socialism!” she said. Later, Comrade Alexus commented on the hypocrisy of the Trudeau government, which opportunistically panders to Indigenous people to get their votes while spending $110,000 in legal fees to avoid paying $6,000 for orthodontic care for an Indigenous teenage girl. Comrade Zoey was the last to intervene and spoke at length about her family’s history, highlighting both the hardships that Indigenous people have endured in Canada and their rich history of struggle. Rob concluded the session by calling on comrades to bring a socialist perspective into the Indigenous movement.

On the first day of the school, we gathered to make a declaration of solidarity with Wet’suwet’en, which was read by Zoey. You can watch the video here:

‘Red October’ in Latin America: World revolution on the march!

The final plenary session of the weekend was on the topic of “Revolution and Counter-Revolution in Latin America”. The presentation, given by John Peterson, editor of Socialist Revolution, provided an overview of events in the region in recent months. John explained how the coming to power of the right wing in some Latin American countries (Bolsonaro in Brazil, Macri in Argentina, Duque in Colombia) had for some superficial observers signalled a “conservative wave” in the region. The events of recent months, however, have completely contradicted this one-sided analysis. Ecuador, Chile, Colombia, Haiti—all of these countries have experienced general strikes or insurrectional movements in the last period. However, there is a lack of revolutionary leadership which can channel these movements towards the overthrow of capitalism. These revolutionary events in Latin America are causing a revival of the Marxist traditions in the region and it's up to us to build the Marxist leadership necessary to guide the masses to victory. As John explained, the events of last fall in Latin America are only part of a revolutionary wave which is striking everywhere. There will be many defeats, but it only takes one revolutionary victory to transform the entire situation!

The closing remarks at the end of the school were made by Alex Grant, founding member of Fightback. Alex highlighted how fantastic the school was and thanked everyone for working so hard to make the weekend a resounding success. Alex explained that when we began the winter school ten years ago, it was a very small group of people. But we had one thing that others did not: the ideas of revolutionary Marxism. Alex appealed to the attendees in the room to take the ideas that were learnt on the weekend, bring them back to their communities and help to build the Marxist leadership that the masses deserve and need to overthrow capitalism and all of the horrors that come with it, once and for all.

The Montreal Marxist Winter School was the biggest ever, with than 250 people in attendance / Image: Fightback