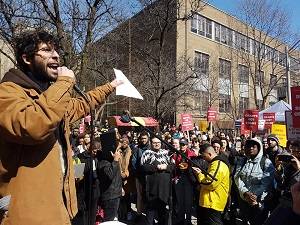 Thousands of Ontario post-secondary students walked out of their classes Wednesday, 20 March in protest against Premier Doug Ford’s cuts to student funding. The walkout, called for by the Canadian Federation of Students (CFS), involved 17 campuses, including in Toronto, Ottawa, Windsor, and London. The action was also joined by hundreds of high school students, who staged spontaneous protests in support of university and college students.

Socialist Fightback Students (SFS) participated in and helped organise the walkout and subsequent rallies at a number of universities, including Ryerson University, York University, the University of Toronto and OCAD, a small Toronto arts university. After only a few hours, SFS spoke to hundreds of students, and collected more than 300 signatures in favour of a student strike.

At York University, approximately 300 students gathered to denounce Ford’s cuts to education. More than a dozen SFS activists participated, making it the largest student group apart from the student union itself. In the days leading up the walkout, SFS played a leading role in mobilising York students, a fact which was recognised by student union leaders. SFS activist Kiam spoke at the rally about the need to escalate the movement, for which he received repeated cheers. Students later told us it was the most passionate speech they had heard all day. By the end of the rally, almost 150 students had signed the petition. Many also showed interest in joining the SFS club on campus, which is already one of the largest clubs at York University.

At the University of Toronto, around six SFS activists participated in the 250-strong march and rally. Despite our smaller presence, SFS managed to speak to dozens of students and collect two pages of signatures. For many, it was their first time encountering us, and our conversations encouraged them to get more involved in SFS.

At OCAD, a university with only 4,300 students, 250 participated in the occupation of an executives-only building on campus. At first, students were refused entry by security. The reason given was that the number of students exceeded building capacity. After a few minutes of shouts and chants, students were permitted entry and overtook the upper floor of the building.

SFS has only started activity at OCAD in recent weeks. Despite this, we played a large role in organising the walkout in collaboration with the student union. On the day of the walkout, our lone activist was overwhelmed with students eager to join SFS, and ran out of petitions and copies of Fightback in a few short hours. In total, we sold 15 newspapers and collected almost 60 signatures. SFS activist Liam McCarthy addressed students during the action about the problems of capitalism and the need for militant action—a presentation that was enormously well-received. SFS is hoping to form an official club at OCAD in the coming weeks. Our role in Wednesday’s action puts us off to a good start. 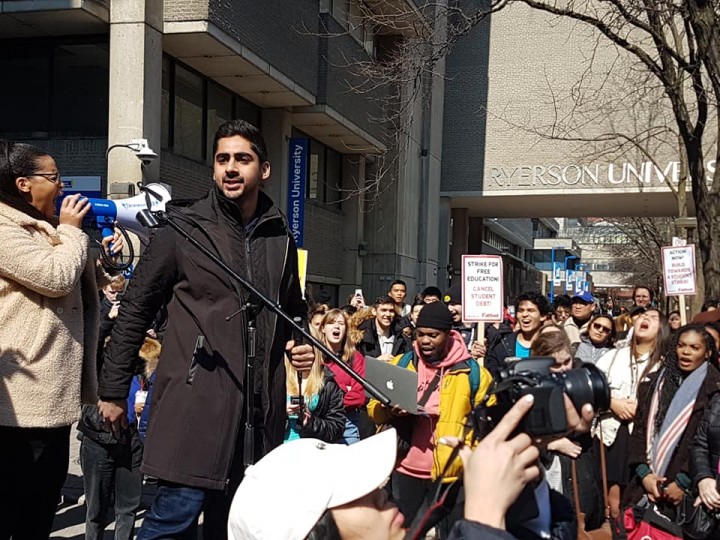 Almost 1,000 participated in the Ryerson rally at its height, beating even the most optimistic expectations / Image: Fightback

However, Ryerson University proved to be our greatest success. According to the CFS, almost 1,000 participated in the Ryerson rally at its height, beating even the most optimistic expectations. In the past, certain activists have labelled Ryerson a “right-wing” campus, rejecting it for more “left-wing” campuses like York University.

The facts speak for themselves. On the day of the walkout, Ryerson organisers pulled out more students than on any other campus. Their rally was the largest in the province. This strong turnout surprised almost everyone except for SFS, which have patiently built a sizeable base on campus in recent years. As such, SFS also played a leading role in organising the Ryerson walkout and the subsequent rally. In the weeks leading up to the action, SFS activists spoke to hundreds of students at tablings and in-class talks, which contributed to the high turnout.

Montreal SFS activist Julien Arsenau was the first of our two speakers at the rally. Arsenau spoke about the experience of the 2012 Quebec student strike and its lessons for Ontario. In particular, Arsenau attacked the idea that Ontario is just “too different” from Quebec, making a student strike impossible. Movements are driven by living forces, not by national peculiarities, he explained.

Our second speaker was SFS organiser Marco La Grotta. La Grotta outlined the impact of education cuts on working-class students, and made the appeal for a united movement of students and workers to bring down the Ford regime. La Grotta also took aim at Ford’s accusation of student unions engaging in “crazy Marxist nonsense.” What’s really crazy, he said, is a world where students suffer in poverty while millionaires drink champagne in penthouse suites—the kind of world Ford upholds. He ended with a denunciation of capitalism, and called for a militant fight against the government.

In total, almost two dozen SFS activists partook in the Ryerson action, selling close to 50 newspapers and collecting more than 100 signatures. After the rally, students flocked to our table in droves to sign up with SFS. In fact, this was a common theme at every action we participated in.

The future is now 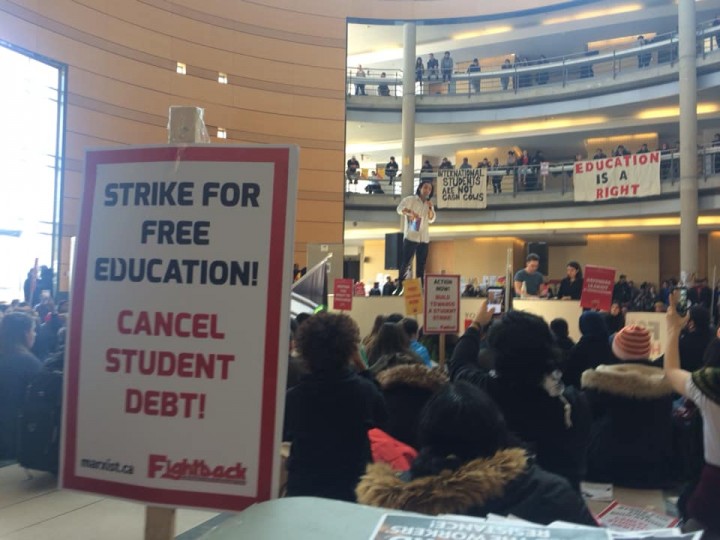 The student movement must escalate its actions, including through one-day strikes, mass demonstrations combining multiple campuses, and in time, an unlimited strike / Image: Fightback

Wednesday’s events mark a turning point in the fight against the Conservative government. But Ford is not yet frightened. From here, the student movement must escalate its actions, including through one-day strikes, mass demonstrations combining multiple campuses, and in time, an unlimited strike. Ford will not listen to reason. The only language he understands is that of force—and it’s beyond time that we learn to speak his language. SFS will continue our work in this direction at a grassroots level, while also continuing to build the Marxist wing of the student movement.

More than ever, students are turning to radical ideas to address the ills of our system. Last week, more than 100,000 Canadian high school students went on strike to demand action on climate change. This week, many of them walked out of their classes yet again, this time to protest education cuts. High school students are leading the charge—but university and college students are not far behind them, nor is the broader working class. Sooner or later, these students and workers will enter the scene of history in a big way. SFS looks forward to standing alongside them, and arming them with the socialist ideas they need to win.