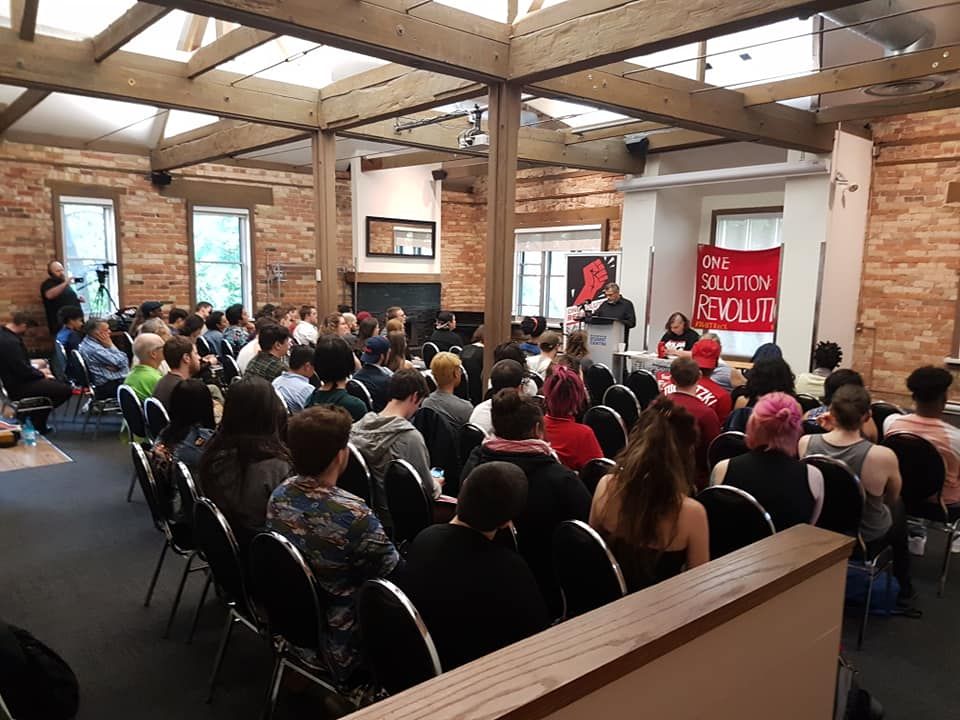 On 23 May, more than 70 students and workers gathered at Ryerson University in Toronto, Canada for Fightback’s event on the Sexual Revolution in the Soviet Union. Presenting on the topic was Fred Weston, editor of the In Defense of Marxism website and author of a recent series of articles on sexuality in the USSR. While over 100 years later the social advances made by the Russian Revolution of 1917 are still widely misunderstood, if not entirely erased by mainstream and pro-capitalist versions of history, Fred’s presentation cut through all the misinformation and laid bare both the real gains and limitations of the revolution. He explained that to learn the real lessons for the struggle against oppression today, we have to start with an honest appraisal of what the Russian Revolution was able to achieve in the early stages of the revolution, and why and how these achievements came to be reversed under Stalinism, placing all of these developments in their historical context.

Fred began his presentation by explaining that homosexuality was decriminalized in some of the republics of the Soviet Union in 1922, well in advance of most advanced capitalist countries, and bringing an end to the brutal repression of homosexuals that took place during the Tsarist era. Fred explained that contrary to the claims of some anti-communist historians, as well as Stalinists, this was a deliberate policy decision of the young Soviet government. Although conservative views on sexuality were still held by many individuals—remnants of the repressive past which stamped their mark on social consciousness—decriminalization of same-sex relations was part of the general trend of liberalization and openness that characterized the early period of the revolution.

Fred iterated that this was demonstrated in other areas of Soviet life as well, as can be seen by the flourishing of culture and the expansion of women’s rights during this period. Fred gave examples of how the revolution began to make gains toward emancipating women from the constraints of domestic servitude, such as accessible divorce, abortions, public canteens, laundries, and daycares. As a result, there was the beginning of a reshaping of and experimentation with interpersonal and sexual relations, with some instances of individuals living more openly as homosexual. According to Fred, these advances were met with hostility in the West, and often a heavy dose of homophobia, and it was claimed that communism would destroy the family.

As the ascendant period of the revolution came to an end, the Stalinist bureaucracy asserted its interests and clawed back many of the gains that had previously been made. Homosexuality was recriminalized in 1934 and a wave of repression unleashed. In his presentation, Fred explained that this cannot simply be attributed to conservative viewpoints, as during the previous decade sexual relations between consenting adults were an area where the government did not intervene, no matter the personal opinions of individuals in power. Rather, it was part of a reactionary policy geared towards reasserting the role of the traditional family. The isolation of the revolution and the conditions of material scarcity led to regression on all fronts, from democratic rights to the right to have an abortion. Even divorce, although not removed as a right, was rendered more difficult. From that point on, the previous position towards the rights of homosexuals was buried and forgotten, and homophobia spread throughout the Communist International. Once this position had been established the world over, it created a huge divide between the left and the rising gay rights movements in the post-war period, which would only be overcome decades later.

Fred finished his presentation by explaining that both the gains made by the Bolsheviks in the early stages of the revolution, and the Stalinist clawbacks that would follow, show that oppression and the emancipation from it are inherently linked to how society is organized around production, exchange, and the development of the productive forces. Capitalism, which is based on production for private profit, forces people into competition and makes the majority fight for crumbs while the minority accumulates most of the wealth and uses oppression and discrimination to keep the majority divided. The Russian Revolution began to eradicate the social and economic roots of oppression by putting the means of production under collective ownership and control, which allowed for the gains previously discussed. However, the isolation and economic backwardness of the country meant that those gains were not sustainable without international revolution, and were eventually clawed back. Fred explained that this shows very clearly that the only way to abolish homophobia and all forms of oppression once and for all is to abolish the capitalist system and all the divisions it entails, which was met by thunderous applause from the crowd.

A lively discussion followed Fred’s presentation, with more than a dozen people intervening and covering topics from the current oppression of LGBTQ people to the historical origins of oppression, and the most effective ways of fighting all forms of oppression and discrimination today. Some speakers contrasted the ideas of feminism, queer theory and intersectionality which are popular in the universities to the Marxist approach to understanding and fighting oppression. The former largely emphasizes individual thought and language as the main target for understanding and ending oppression, but divorces these from their material and social origins. Marxism, on the other hand, explains that our thoughts and behaviours are shaped by our social realities; therefore, trying to change the way people think without ending the material root of social division and oppression, namely scarcity and competition, is a limited way of fighting oppression.

Another speaker talked about how the first Pride march was a riot that involved fighting back against police brutality toward the LGBTQ community, and which included radical left-wing demands to fight sexual and gender-based oppression. He criticized the corporatization and lack of political content of Pride today, and called for Pride to return to its radical roots. Several speakers talked about the most effective ways to fight oppression, such as mass demonstrations and strikes, that draw in all layers of the working class and challenge the entire capitalist system.

A common thread throughout the discussion was the need for class unity; one oppressed group cannot achieve emancipation on their own, because as long as the capitalist system exists, so too will all the forms of oppression it upholds. Furthermore, every layer of the working class has an interest in fighting all forms of oppression whether they experience it personally or not, because all forms of oppression sustain the capitalist system which exploits and oppresses all of us. Multiple speakers linked this reality to the need for class struggle and the socialist transformation of society. There was an electric mood in the room and it was clear that those in attendance were ready and eager to apply what they had learned in the broader movement. After the event most in attendance headed to a nearby pub to continue the discussion, where several new people expressed an interest in getting involved with Fightback in order to fight oppression by fighting for socialism!

In conclusion, although the rights achieved for LGBTQ people in the Soviet Union were of a limited character, based on the scientific understanding of the time, they were a significant step forward and very advanced for that period. This is part of the legacy of socialism that Marxists should be proud of. We have a vastly more thorough understanding of sexuality and gender today, allowing us to set our sights higher in the struggle for equality. However, true liberation will require once again the overthrow of capitalism and its replacement with a socialist society that is based on the needs of the majority.