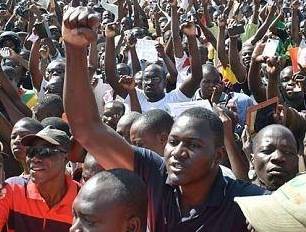 As the country was teetering on the brink, the regime tried to find a negotiated solution involving regional leaders and the governments of France and the United States. But the outcome of the ’’draft agreement’’ was instantly rejected on the streets. Then in a sudden twist, the country’s regular army marched on Ouagadougou, demanding that the RSP disarm and leave the presidential palace.

These events started on Wednesday, 16 August, when heavily armed guards from the Presidential Protection Regiment (RSP) stormed into a cabinet meeting at the presidential palace and detained the country’s transitional President, Michel Kafando, Prime Minister Isaac Zida, and several other ministers. The coup was later confirmed by a colonel of the RSP in a television address. The colonel announced the dissolution of the transitional government and proclaimed their commander, General Gilbert Diendéré as the head of a ‘’National Council of Democracy.’’

It is clear that the coup was meticulously planned and executed. At the same time as Kafando and Zida were arrested, the RSP threw up an iron perimeter around the presidential palace. A section of the guard sealed off Revolution Square, the epicentre of last October’s popular uprising in October last year. Radio Omega, which is a popular radio station, was forced to stop transmission. Elsewhere, RSP guards were patrolling the vicinity of the presidential palace and forcibly broke up any gatherings on the streets. The demonstrations which took place in front of the presidential palace was met with heavy gunfire. In the process, three people were killed and more than 60 others were injured.

As soon as news of the coup became publicly known, protests erupted across the country. Trade unions responded with an immediate general strike which has paralysed the economy since last Thursday. In the capital, Ouagadougou, the crackdown was at its heaviest on the first two days after the coup. However, on Saturday a fuel shortage developed across the city as a result of the strike. This forced the RSP to scale back their patrols and confine their presence to the presidential palace and the districts immediately surrounding it. This resulted in the erection of more barricades in the rest of the city from Saturday onwards. The crackdown in the capital caused the kind of mass gatherings which we saw in Revolution Square last year to be replaced by mobilisations in the neighbourhoods.

In the rest of the country, the situation is the opposite. The presence of the RSP was almost completely confined to Ouagadougou. In other cities news of the coup was met with mass mobilisations. In Bobo Dioulasso, the country’s second biggest city, defying the curfews the masses have stayed on the streets non-stop. In Fada N’Gourma, Kaya, Dori, Ouahigouya and Banfora, protesters have been blocking traffic, occupied the local central squares and erected barricades without meeting opposition from police or the army. On Friday in the city of Bobo Dioulasso, a crowd led by women marched on an army base on Friday and demanded that the soldiers come over to their side. The troops responded by saying that they do not support the coup and that they are not following instructions from the RSP. They allowed the marches to go ahead unhindered. This was replicated in other cities of Burkina Faso. The northern city of Ouahigouya was paralyzed by anti-coup protests.

There were primarily two reasons for the coup. First of all, there is the electoral process. In April the transitional government amended the electoral code to exclude anyone who supported Blaise Compaoré’s attempt to remove presidential term limits in 2014 from running in the 2015 elections. The attempt by the regime last year to allow the corrupt Blaise Compaoré to stand for another term as president after 27 years in office, was the spark for the insurrection in October 2014. The exclusion directly affected the wing of the regime which was closest to the RSP.

But the second is even more pressing. The RSP is a hated institution in Burkina Faso, having been set up primarily to protect Compaoré. In the process it acted with complete impunity and eliminated anyone who posed a threat to its interests or to Compaoré. Many of its commanders were deeply involved in murders of opponents in the past. For this reason, the masses have demanded justice from the transitional authority. After Compaoré’s fall, one of the major questions faced by the transition was what to do with the RSP. Then on Monday 14 September, two days before the coup, the Commission for National Reconciliation and Reform released a report to the Prime Minister Zida in which it describes the RSP as an ’’army within the army’’ and reccomends its dissolution.

Hand-in-hand with this is, is the investigation into the death of Thomas Sankara in which the RSP commander, Diendéré is suspected to be deeply involved. A shadowy, physically strong and intelligent man, Diendéré was Compaoré’s right-hand man for the 27 years he was in power. He has long been suspected of being involved in the murder of investigative journalist Norbert Zongo and of profiting from illicit smuggling of goods in the region.

Before he thrust himself into the limelight last week, he had always preferred to operate in the background. But when confronted with the end of Compaoré’s rule, the potential dissolution of the RSP, the exclusion of his political allies from the electoral process and the threat of justice hanging over his head, he decided to play his trump card and launched the coup.

This was a calculated move which nearly paid off. It was a tactical move intended to force the hand of the other wing of the regime to include the those candidates who were sidelined inthe electoral process and to save RSP from being disbanded. This was supposed to guarantee Diendéré and the RSP a voice in a transition process from which they were previously excluded.

From the very beginning, Diendéré and the coup leaders have been eager to hold ’’inclusive’’ talks with the other side of the regime. They eagerly welcomed the involvement of Senegalese president, Macky Sal,l and the president of Benin, Thomas Boni Yayi, as mediators. As a sign of their eagerness to talk, they even released the transitional president Kafando on Friday. For three days marathon negotiations including election front runners, Roch Marc Kabore and Zephirin Diabre, were held at the Hotel Laico in Ouagadougou. On Sunday it seemed Diendéré was very close to achieving his goals. Macky Sall and Boni Yayi announced that a ’’draft agreement’’ was reached which included a deal that Kafando and the interim government would be reinstated and that the date of the elections would be pushed back to 22 November this year. However, crucially, the deal included the two objectives of the coup: an amnesty for Diendéré and the RSP and the reinstatement of the candidates with close links to Compaoré. Macky Sall announced that the deal would be finalised at a summit of the regional economic bloc ECOWAS in Nigeria on Tuesday, 22nd September.

But nothing could have prepared the regime for the events of Monday. After hearing the details of the rotten deal, the masses started protesting in large numbers in the Zogon and Tampouy, districts of the capital city – Ouagadougou. Down with ECOWAS!’’, they chanted. A young man at a barricade told RFI: ’’We want to get out there and take our destiny in our own hands, The bodies are not even buried and they want an amnesty. We shall barricade everything.’’

The influential Balai Citoyen, which led last year’s insurrection, also condemned the deal. Their spokesperson, Guy-Herve Kam, said: ’’It is shameful what has been proposed by ECOWAS. I am ashamed to be African. They have forgotten the dead.’’

Then, almost simultaneously, the army chiefs released a statement which said that ’’all the national armed forces are converging on Ouagadougou with the sole aim of disarming the Presidential guard.’’ They also called on the coup supporters to hand over their weapons at army barracks. Convoys of troops were seen heading to Ouagadougou.

The news of the protests and that the regular troops were moving against the RSP electrified the city. Residents built barricades to prevent the RSP from moving against the troops; elsewhere hundreds of people were reported to be out in the streets celebrating as the news came through. Many applauded as the armored personnel carriers rolled into the city. Then, in extraordinary and confused scenes, the RSP chief, Diendéré announced in a television address that he would release captured interim prime minister Zida and hand over power to the transitional government. He also apologised for the loss of life during the coup. Finally he warned of ’’chaos and civil war’’ before ending his speech. The ambassador of France later confirmed that Zida had indeed been released.

As the night closed and the army reached the outskirts of Ouagadougou, the city was awash with rumours regarding the whereabouts of  Diendéré. A jubilant crowd of several hundred gathered at the home of the Mogo Naaba, a traditional leader of the Mossi people, after a rumour that Diendéré was planning to step down at the king’s house. ’’Homeland or death! We will be victorious!” they chanted, echoing Sankara’s anti-imperialist slogan.   Later, a BBC journalist reported that there was ‘’intense’’ negotiations going on in the city to avoid a direct clash between the RSP and the army and to find a safe exit for Diendéré.

The situation is extremely fluid in Burkina Faso. Events are changing almost by the hour. Nearly one year since the start of the revolution, the masses have once again saved the day. History shows that the mobilisation of the  masses is the driving force of all revolutions. This is once again proven by the current events in Burkina Faso. The mass movements in Fada N’Gourma, Kaya,  Dori, Ouahigouya and Banfora were crucial. In all these places, and especially in Bobo Dioulasso, the power is in the hands of the masses, although they are not aware of it. This speaks to the revolution's greatest weakness, namely the lack of a mass revolutionary party. The result will be that the revolution is going to be very protracted and will probably unfold over many years.  In spite of this, the revolution has achieved extraordinary results and the masses are learning fast.