Share
Tweet
The TUC voted unanimously in support of the Venezuelan Revolution. This makes the TUC the first trade union confederation in Europe to give support to the Venezuelan Revolution. Orlando Chirino, accompanied by Hands Off Venezuela (HOV) supporters received massive applause as he stood with clenched fist in the gallery. This is the culmination of months of intensive work by the HOV campaign.

The British Trade Union Congress (TUC) expressed its unconditional solidarity for the Venezuelan Revolution in the third session of its conference held on Wednesday 14th September in Brighton, England. 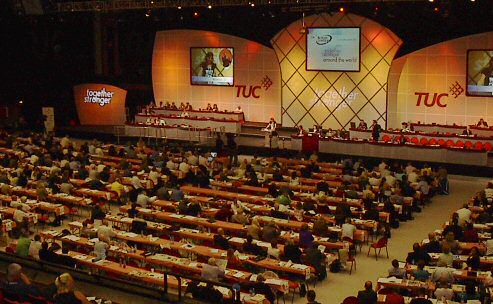 Up to 1500 delegates representing 6.7 million workers unanimously voted in favour of motion 79 as amended, which expressed wholehearted support for Venezuela’s Bolivarian Revolution and the National Union of Workers (UNT), the new Venezuelan trade union confederation, formed after the CTV bureaucracy betrayed the Venezuelan working people in 2002, during the aborted anti-Chavez coup. This was the culmination of years of patient work by the Hands Off Venezuela campaign, the only solidarity campaign that has consistently supported the UNT and the Bolivarian revolution from the beginning. HOV has been engaged in intensive work over the last few months, moving resolutions and holding fringe meetings at every single trade union congress in Britain. Now this work has been crowned with success.

Motion 79 was presented to the TUC congress by NATFHE – the University and college lecturers’ union ‑ which is one of the main trade unions supporting the Hands Off Venezuela campaign. In fact at the previous two national congresses of NATFHE motions in support of the HOV had been passed, making support for HOV official union policy. This was thanks to the consistent work of HOV supporters in the union over some years.

Shortly after 4.30pm yesterday afternoon (September 14), NATFHE President John Wilkin took the floor of the TUC congress to defend motion 79. In his address, Wilkin explained the great achievements of the Bolivarian Revolution. In spite of the short time he had to defend the motion, he gave a very balanced account of the achievements and changes introduced by the Chavez administration.

At one point during his speech, he said, “We need a bit of Bolivarianism in Britain”. The lecturer went on by mentioning the attacks and harassment on the part of US imperialism and their allies in Venezuela. Shamefully, he mentioned that among the allies of imperialism in Venezuela there is a trade union confederation – the Venezuelan Workers’ Confederation (CTV). In order to illustrate how corrupt this so-called union had become he explained what they had done during of the lock out of December 2002 to January 2003. He asked his colleagues, “Can you imagine a general strike called by the CBI (Confederation of British Industry) together with the TUC to overthrow a Labour government in Britain?”

Then John Wilkin explained how the vacuum left by the CTV had been filled by the UNT. He mentioned that the UNT was the response of democratic and revolutionary trade unionists to the betrayals of the CTV. At this point in his speech he turned to address Orlando Chirino, national coordinator of the UNT, who was in the visitors’ gallery listening to the debate accompanied by Hands Off Venezuela supporters. He addressed him in Spanish. Comrade Chirino responded to the applause he got at that moment by standing up and clenching his fist in front of the approximately 1500 delegates present in the hall. The NATFHE representative concluded his speech by saying that Venezuela’s Bolivarian Revolution is an inspiration for all fighters all over the world.

Motion 79 was amended by AUT (Association of University Teachers) and railway workers’ unions TSSA and ASLEF. TSSA’s amendment urged the General Council to “establish relations with the Venezuelan National Union of Workers (UNT) to ensure that news of trade union issues, at least, is more widely reported.” This resolution adopted by the highest body of British trade unionism now opens the doors to collaboration with their legitimate Venezuelan counterparts.

Motion 79 as amended is another stone laid in the building of the international solidarity that the Venezuelan revolution and especially the Venezuelan labour movement need to overcome imperialist intervention.