Iraq
Share
Tweet
After being labelled a “butcher” by the British press following last week's bad election results for the Labour Party and the subsequent Cabinet reshuffle, Tony Blair suffered another blow, this time not at home but abroad. In Basra the British army lost five soldiers, including the first female casualty, as their helicopter crashed and British soldiers came under attack. 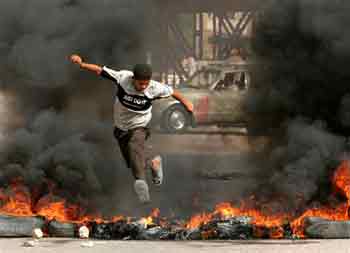 After being labelled a “butcher” by the British press following last week's bad election results for the Labour Party and the subsequent Cabinet reshuffle, Tony Blair suffered another blow. As if the recent scandals at home were not enough, attention was drawn to that other hotbed of controversy, Iraq. In Basra the British army lost five soldiers, including the first female casualty, as their helicopter crashed and British soldiers came under attack.

Helicopters have become the main means of transport for British troops in Basra. More than ever the Lynx helicopter is the loyal workhorse of the British army in Basra, where they are based, as it is simply too dangerous to walk or drive through the streets of the city without being threatened by lethal roadside bombs. This fact in itself shows the volatility of the whole situation in Iraq, expressed in the numerous bombings, killings and explosions taking place on a daily basis all over the country. Now not even helicopters are safe for the occupation forces. In the Daily Mirror an intelligence official commented: “British troops are now in a terrible position in the city as it is clear the public mood is swinging towards wanting them to leave. Whereas troops were once able to go out and take part in reconstruction schemes and meet locals it is now extremely difficult for them to do so.” (Daily Mirror, May 8)

When the helicopter went down on Saturday – the official reason is not known yet, though police claim it was taken down by a rocket fired from the ground – within minutes British troops arrived on foot, accompanied by armoured vehicles. They were not received as heroes, to say the least: the welcoming present consisted of stones thrown from the crowd along with petrol bombs. No less than 600 troops were needed to maintain a cordon around the wreckage of the helicopter. 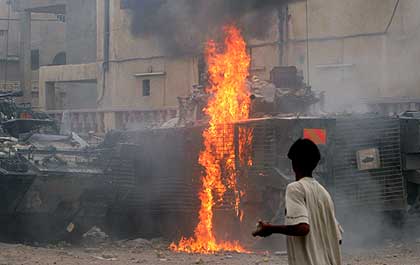 Sergeant Stuart Lansdowne testified to the Reuters news agency how his men came under a hail of rocks, Molotov cocktails, grenades and home-made bombs: "It was a constant stream of about eight hours of folks being pummelled," he said. "We couldn't clearly identify where the bombs were coming from, so we just stood and took it." And take it they did indeed, but they were giving it too as army commanders had to admit they fired into the crowd with both plastic and live bullets. At least four Iraqis died during the event and more than forty were wounded.

Basra residents said the euphoric scenes following the helicopter crash are a direct result of the city's descent into misery and that such a confrontation was likely to recur. "The miserable situation in Basra and the south definitely had a role in the build-up of events," said Abu Ali, a Basra resident. "Electricity is absent for most of the day and gasoline is very expensive. Ordinary people can never get a job at the state security forces because it is entirely controlled by the militias. People think those who used to live abroad came and controlled everything while the common citizens still cannot get basic life needs." (Guardian, May 8, 2006)

Despite the idle hope of Britain's new Defence Secretary, Des Browne, who tried to reassure parliament that Basra was not “rising up”, it does not take much intelligence to see that it is precisely the deteriorating social conditions and constant insecurity on all levels that are causing so much distress amongst ordinary Basra citizens. Electricity is considered a luxury, unemployment is at high levels, education is in shambles and access to health care is scarce too. The Iraqi people may have suffered under Saddam Hussein, but it is undeniable that they are worse off now than before the invasion of their country – and that, at the end of the day, is what determines their attitude towards a foreign occupation force that, despite all the rhetoric, only aggravates the situation. 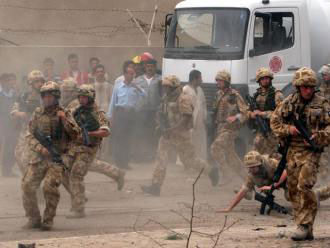 The pompous words about “establishing democracy” must sound very hollow to people who have seen very little of this much trumpeted “democracy”. Yes, the people of Basra, just like their fellow Iraqis, now have a President who wrote an official letter to Tony Blair expressing his condolences, not for his fellow countrymen who died in the skirmish, but for the British soldiers in the helicopter – describing their deaths as a “vile crime”. Surely this does not help the Iraqi people in their day-to-day struggle for a normal life. Reuters quoted 23-year-old university student Saeed Salman, who said, "The violence is unacceptable, whether the downing of the helicopter or the reaction of the British forces. We all want our city to be calm and free from violence." Others, like Batul Abid al-Amir, 33, show a clearer understanding of the real state of affairs: "What happened (on Saturday), though we are against it, is predictable and natural, because these forces are occupiers and they have to know that the people are fed up with their presence in their country."

The recent clash comes after a year in which the security situation in Basra gradually worsened. Once considered one of the safest areas in Iraq, Basra is now just another area of serious concern. Last September, British forces clashed with Basra police who had detained two British secret service agents dressed in Arab clothes and carrying explosives. To this day the British government has not come up with any explanation of this significant event, which can only be seen as a conscious provocation coming from the murky world of the British intelligence services.

In February of this year things came to a head as Britain started arresting police they accused of having links to gangs and militias, after which the local authorities in Basra broke off all relations with the British forces. That same month footage of British soldiers beating an Iraqi teenager was made public, which only alienated the British forces even more from the local population.

As we wrote last year:

“If there ever was any “love” on the part of the local population towards their occupiers, by their own actions the British troops are quickly destroying any credibility they might have had before. The myth of peaceful British soldiers who are supposedly champions of “peace-keeping” is gradually being destroyed. Insofar as this myth had not already gone down the drain with their divide and rule policy in Northern Ireland – and in fact in the whole history of British imperialism, with its brutal colonial wars in Africa and the Indian subcontinent – the real nature of the whole operation cannot remain covered up.” (From Tal Afar to Basra: fanning the flames of discontent in Iraq, September 27, 2005)

The recent helicopter crash and the violent protests are just another crack in the dam. It might take a few more cracks, but it is inevitable that at one point the dam will break.