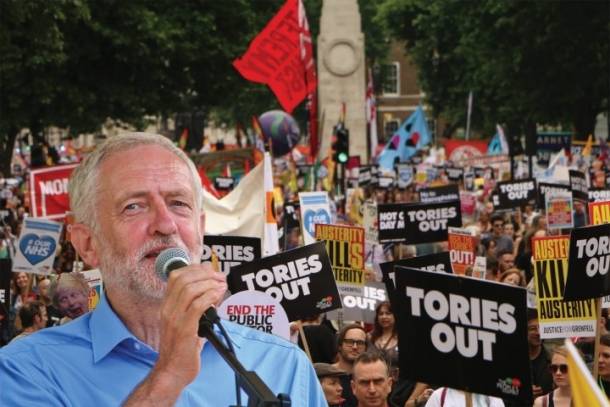 The battle lines have been drawn. Britain is to hold a general election on 12 December. This will be the most bitterly fought election in generations.

In the words of Jeremy Corbyn:

“This election is a once-in-a-generation chance to transform our country and take on the vested interests holding people back.

“The choice at this election could not be clearer: A Labour government will be on your side; while Boris Johnson’s Conservatives, who think they’re born to rule, will only look after the privileged few.

“We will now launch the most ambitious and radical campaign for real change that our country has ever seen. This is our chance to build a country for the many not the few and fit for the next generation.”

These fighting words from Corbyn will inspire all those who want to rid themselves of this abominable Tory government led by a cabal of privileged rogues and charlatans. It will inspire those on zero-hour contracts; those on the minimum wage; those who have no child care; those on eye-watering rents. It will especially inspire the youth, who are desperately seeking a future.

Johnson will do everything – including lying through his teeth – to secure victory for him and his millionaire friends.

They will lie about more funding for schools and hospitals, when they have carried out the most brutal austerity – together with the yellow Tories, the Liberal Democrats.

The Tories have presided over the greatest shift of wealth to the richest parasites, while the poorest sections have been hit the hardest. The Tories are a government for the rich, of the rich, by the rich.

They will privatise the NHS by opening it up to US corporations, as the recent Dispatches programme revealed. These capitalist vultures hope to squeeze fat profits out of the NHS, vastly pushing up the price of medicines and treatments for the most vulnerable. 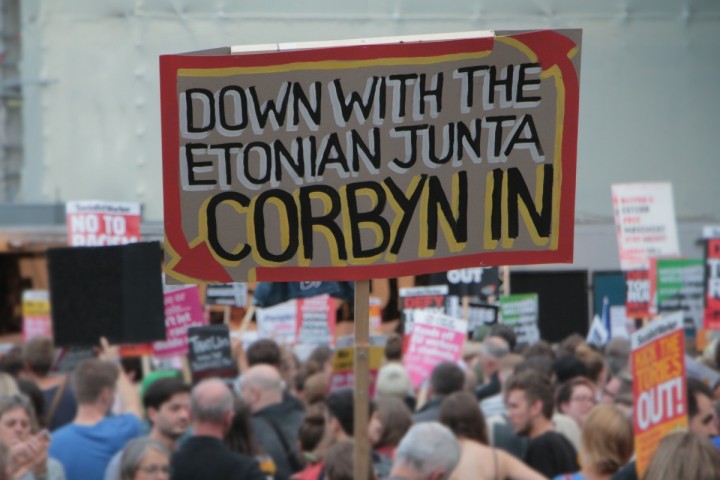 The Tories are a government for the rich, of the rich, by the rich / Image: Socialist Appeal

Johnson has been forced into calling this general election. He hopes he can win a majority. But this is a bad mistake. He thinks the Tories’ current lead in the opinion polls will ensure their victory. But he and his advisors are mistaken.

The situation is extremely volatile and the mood can – and will – change in the space of days. The next five weeks will be a rollercoaster.

“Of course it’s a gamble,” stated one senior advisor to the Prime Minister. “But it’s the least worst option.” What confidence!

Rory Stewart, the former Tory leadership contender, predicted that “It will be a repeat of what happened in 2017.”

Two-and-a-half years after Theresa May’s decision to go for a snap election, Johnson finds himself in a strikingly similar position. That was a time when the Tories lost their majority. Memories of this are still enough to make Conservative MPs break out into a cold sweat.

The electoral landscape is certainly similar to that prior to the 2017 election. Yesterday Labour was polling on 25 percent – exactly the same level as when Theresa May called her snap election. Under Johnson, however, the Tories are well behind where they were at the start of their last campaign. Then the Tories were polling 44 percent on the day the election was called. Today they are on 36 percent of the vote.

We must remember that the 2017 general election transformed a Tory majority into a minority. May had a lead of 22 points, but this vanished. 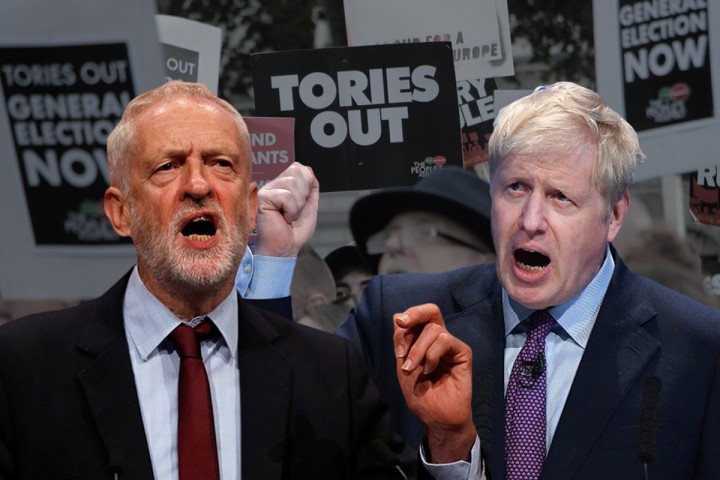 In 2017, Labour's campaign and radical manifesto reduced a 22 point Tory lead to nothing / Image: Socialist Appeal

The reason for this was Corbyn’s fighting campaign around the country and Labour’s radical manifesto. This transformed the situation and saw Labour gain 11 percentage points during the election. This was the biggest electoral swing for the Labour Party since 1945.

“If the same feat were to be repeated in 2019,” explained the Financial Times, “the Tories would be out of office.”

According to John Curtice, the UK pollster, calling an election is a gamble for Boris Johnson. The Labour Party does not have to make much progress in the campaign to take seats from the Tories and boot Johnson out of Downing Street.

Even to get to this current position, Johnson has had to betray his former allies. He was forced to dump the DUP, alienating them from any future deal.

Scotland has also been hung out to dry, with Ruth Davidson abandoning the Scottish Tory leadership. This is likely to result in the Tories losing most of their seats north of the border. There are 13 Tory seats in Scotland – all of which are vulnerable.

Johnson’s Brexit stance has undermined the Conservatives’ support in the south, which was key to their previous success.

“Most of us are up for it,” said Gary Streeter, a veteran Tory MP and former whip. “I think we’ll lose 20 and gain 60.” On the other hand, leaving aside the bragging, the Tories could lose 20 and gain nothing. 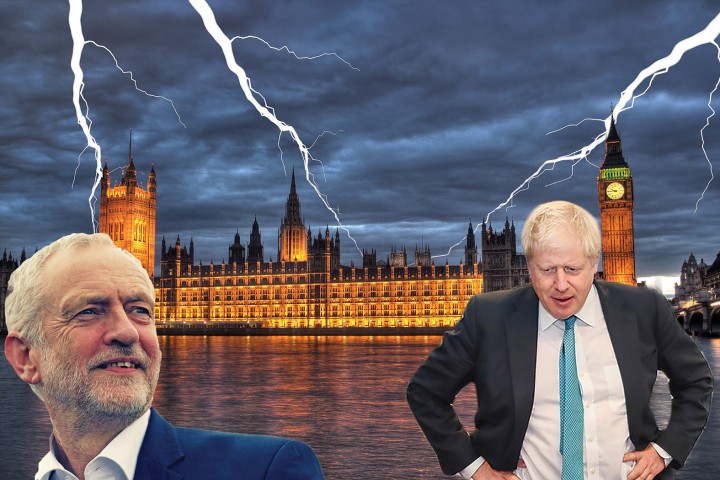 Johnson has taken a big risk and dumped a lot of allies over this election / Image: Socialist Appeal

Johnson has attempted to side-line the Brexit Party by shifting further to the right. But in doing so he has alienated large sections of traditional Conservative voters, who may move to the Liberal Democrats.

In any case, the Tories are still vulnerable to attack from Farage for failing to take Britain out of the EU by the Halloween deadline, as so adamantly promised. Johnson’s ill-fated “do or die” pledge to take Britain out of Europe on October 31 has turned into a millstone around his neck. The Brexit Party could therefore eat into the Tory vote, allowing Labour to win seats.

All of this could split the Tory vote and let Labour in.

But this outcome is far from certain. Workers in these areas are well-acquainted with the scourge of Tory policies, which destroyed their communities. People have long memories of the Tories and Thatcherism. The anti-Tory feeling in the north runs deep.

“The Conservative party lead doesn’t have to go down much at all to put us into hung parliament territory,” stated John Curtice.

This – and much more – can be achieved again. By mobilising its 500,000 members, Labour can convince millions to elect a Corbyn government. The Tories, by comparison, have nothing on the ground.

Of course, Labour cannot take anything for granted. The Tories and their friends in the press will throw everything against us. It will be the most ferocious election for decades.

Nevertheless, Labour is on a strong footing. As Corbyn has correctly stressed, we are the party not of the 52 percent, nor the 48 percent, but the 99 percent. We represent the working people against the billionaires and their crisis-ridden system. 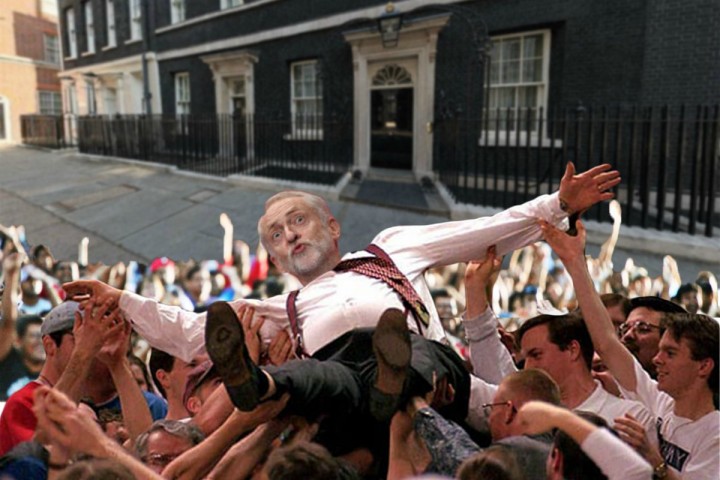 Coupled with a bold left-wing manifesto, a mass campaign can turn the current situation around and put Corbyn into Number 10. Nothing is assured and it's all to play for! / Image: Socialist Appeal

Corbyn has already begun to tour the country, rallying crowds. And activists have responded to Labour's call to arms, digging deep to raise £500,000 in small donations from individual supporters for the party's war chest in the space of 24 hours.

Coupled with a bold left-wing manifesto, a mass campaign can turn around the situation and put Corbyn into Number 10.

Corbyn’s message of change can inspire millions, especially those who have newly become eligible to vote – those who were 16 and 17 last time around. Student and youth can play a key role in marginal seats.

Our movement has every chance of success. The more bold and radical the programme, the more support we will gain. That was the lesson of 2017.

We must make this general election the Tory’s Waterloo – where Johnson reaches his demise in a ditch. We must fight with all our might to secure a Corbyn-led Labour government. In doing so, we will fight for bold socialist policies to answer the crisis of capitalism.

The Tories are not confident. They have everything to lose. We, on the other hand, enter this election with confidence in our ideas. With six weeks of mobilisation, determination, and conviction, we can win.

Take to the streets!

Down with the Johnson millionaire government!

Fight for a socialist Labour government!