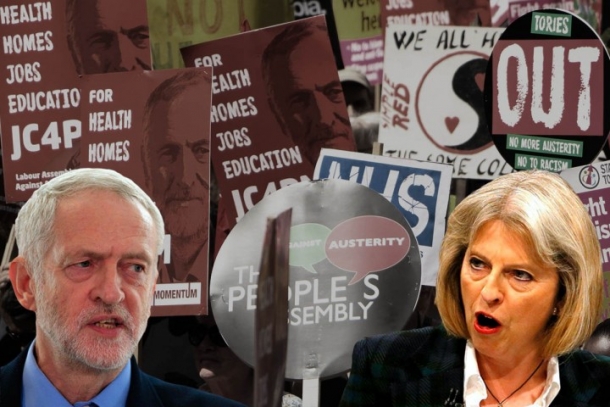 “We all f***ing hate her. But there is nothing we can do. She has totally f***ed us.” These are the pearls of wisdom from a Tory MP recently describing the collective hatred with the Conservative Party towards British Prime Minister Theresa May.

The Easter break – a period commemorating crucifixion and resurrection – has done nothing to help. May is increasingly despised. Her time is clearly up. She is finished.

“Go today!” is the cry of anguish amongst Tory MPs and members, with the party facing electoral meltdown in the coming local and European elections. According to the Tory news website ConservativeHome, May’s approval rating amongst the Tory membership has collapsed in the last three months, from minus 40.8 in February to minus 73.5 in April. 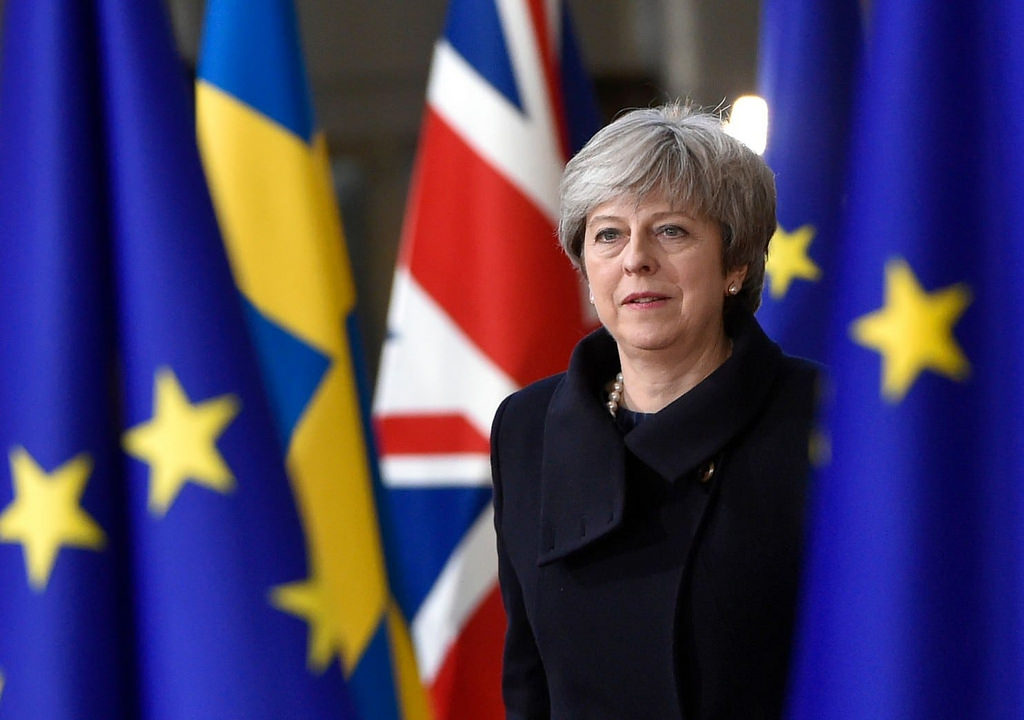 The Tories want Theresa May to walk the gangplank, but she is reluctant to jump. If they do not throw her overboard, however, she will end up going down with the ship / Image: Tiocfaidh

The despair in the country and in Parliament is palpable. The Tory Party is traumatised. Graham Brady, chair of the backbench 1922 Committee of Conservative MPs, has warned that the party is sliding towards anarchy.

They want Theresa May to walk the gangplank, but she is reluctant to jump. If they do not throw her overboard, however, she will end up going down with the ship.

“It’s awful. [Tories] are livid, they are fed up,” said Johnny Mercer, Tory MP, “but not as fed up as I am having to come up and work here.”

How far the mighty have fallen. The British Tory Party was once the most successful capitalist party in Europe. But now it is a laughing stock.

The Conservatives have not experienced such a deep crisis in more than 150 years. Then the party was deeply divided over the repeal of the Corn Laws – the 19th century equivalent of Brexit. 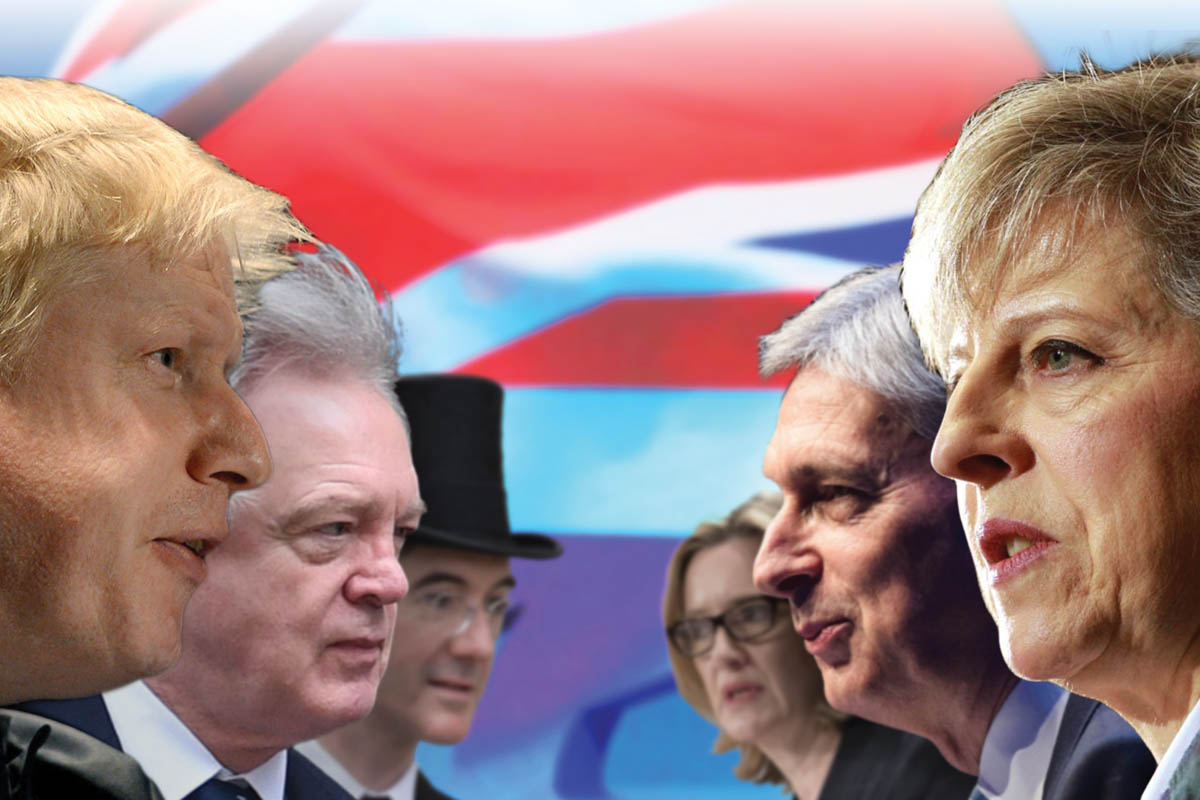 The decline of British capitalism has mirrored the decline and degeneration of the Tory Party itself / Image: Socialist Appeal

In 1846 disaster struck when the Tories split over the issue of free trade or protectionism. Robert Peel and most senior Tories favoured repeal of the Corn Laws, but they were opposed by rural backbenchers. Following repeal, the protectionists combined with the liberals to overthrow Peel's government. It would be nearly 30 years before the Tory Party would again win a majority in the House of Commons.

Marx explained that history tends to repeat itself – first as tragedy, secondly as farce. Today’s Tory crisis has parallels to a rip-roaring comic opera.

The ‘European’ question has completely poisoned the Tory Party, consumed now by xenophobia and dominated by Little Englanders. The decline of British capitalism has mirrored the decline and degeneration of the Tory Party itself. Brexit was mad from the point of view of British capitalism, with the majority of its market and profits tied to Europe.

But the “One Nation” Tory Party of big business has been destroyed. The inmates have taken over the asylum.

From the very beginning, Theresa May – the worst prime minister in history – tied her fortunes to the Brexiteer ultras and the sectarian DUP, who have propped up her government. “No deal was better than a bad deal,” became the Tory leader’s mantra.

But after two years of so-called negotiations with Europe, May came forward with her ill-fated Brexit deal, which has alienated everyone. 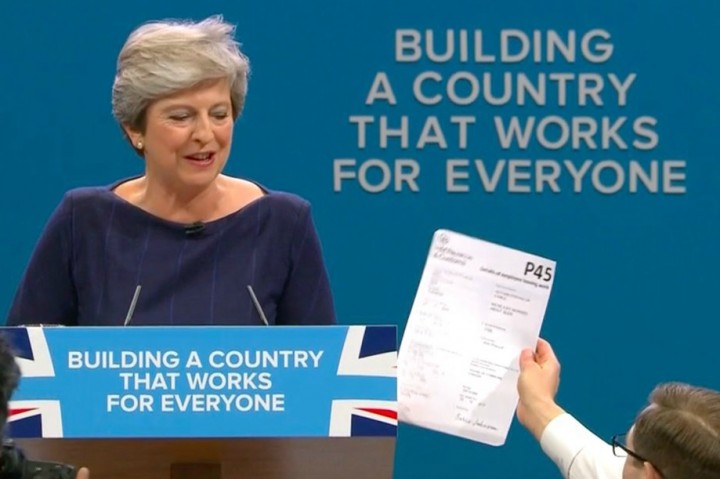 May is leading the weakest government in British history / Image: fair use

The first vote on her proposal resulted in the biggest government defeat in parliamentary history. She tried a second time, suffering the fourth ever largest defeat. With a third vote, May was defeated by ‘only’ 58 votes. There is even talk of her trying a fourth time, but with no sign of success.

The May government has been reduced to the weakest in British history. Her strategy to bring about Brexit has been a complete shambles from the beginning. With time running out and Parliament paralysed, she has now been forced to seek a further Brexit extension. The new deadline for leaving the EU is 31 October – symbolically on Halloween.

This delay has caused absolute fury in the Tory Party. Hardliners talk of “betrayal” and accuse the PM of turning the UK into a “vassal state”. They have demanded that she step down. But instead she has entered into negotiations with the opposition Labour Party to find a way out, provoking denunciations for discussing with “Marxists”. Everything she has done is wrong.

Rebellion in the ranks

With three years now passed since the vote to Leave and still no Brexit, the prospect of seeing the Tory Party competing in the European elections is anathema to the Brexiteers. The ranks of the party are at boiling point.

May avoided being removed as leader in December in an unsuccessful vote of no confidence. This was supposed to guarantee her safety for another 12 months. But the pressure has nevertheless mounted to get her out immediately.

The 1922 Committee is meeting to consider changing the party’s rules to allow another vote of no confidence. The Tory grandees have concluded that the only way to clear the toxic air is to oust May. 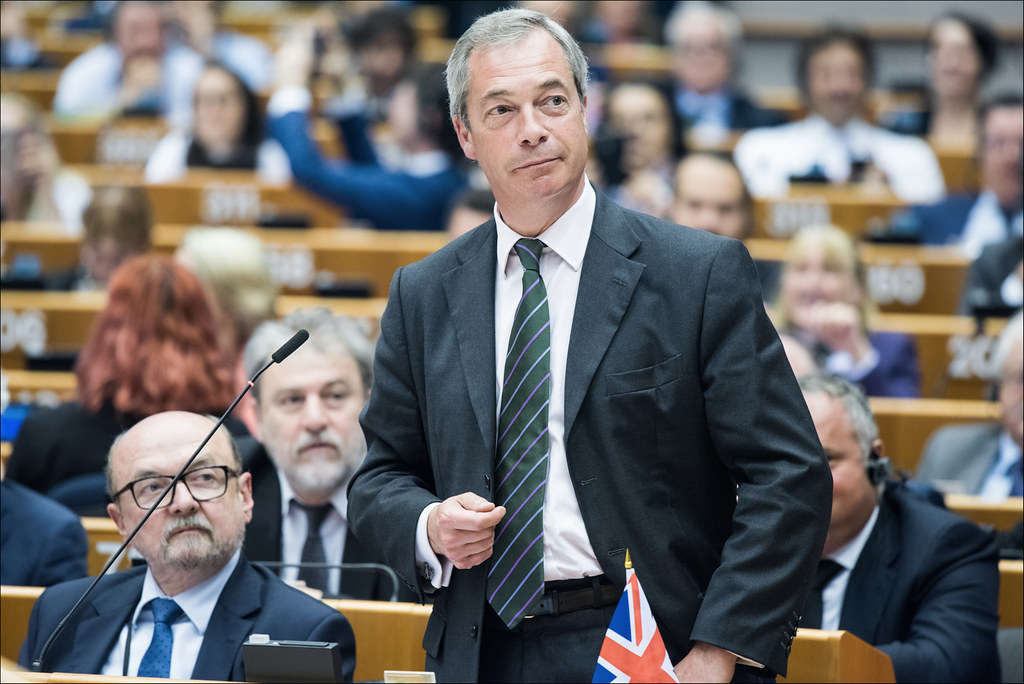 Nigel Evans, Tory MP and joint secretary of the 1922 Committee, stated, “I would be delighted if she announced today...her resignation and we could then have an orderly election to choose a new leader of the Conservative Party.” He added: “the call for her resignation now is growing into a clamour.”

Added to this, an unknown body, the National Conservative Convention, has been called into being by 70 chairs of local Tory associations. The plan is to hold a vote of no confidence in May at this event. However, this cannot take place until after the European elections.

By this time, the Tory Party will be in complete chaos, following a humiliating drubbing in the elections. Whole sections of the party are in open rebellion. Swathes of mutinous Tory councillors and members are refusing to canvass for the party.

A survey by ConservativeHome found that three-in-five Tory members will vote for Farage’s new Brexit Party, which has surged in the polls promising to deliver on the referendum’s result. 40 percent of elected Tory councillors are likely to back Farage.

The Tory ranks are demanding May depart the scene by 30 June – and not a single day longer. She has only been allowed to stay in office until now due to the fear of a Corbyn Labour government. But everything has its limits.

This Tory implosion is paving the way for a Labour government. Recent polls now consistently put Labour ahead and in line to form the next government. Even this prospect, however, does not deter frenzied Tory Brexiteers.

They believe that May should be replaced by a ‘genuine’ Brexiteer, such as Boris Johnson. (Nevermind that Johnson only supported the Leave campaign for his personal ambitions.) Boris is an absolute imbecile; nevertheless, he is the favourite to take over from May. According to a new poll by ConservativeHome, Johnson has 32 percent support, followed by Dominic Raab – another fool – on 15 percent. 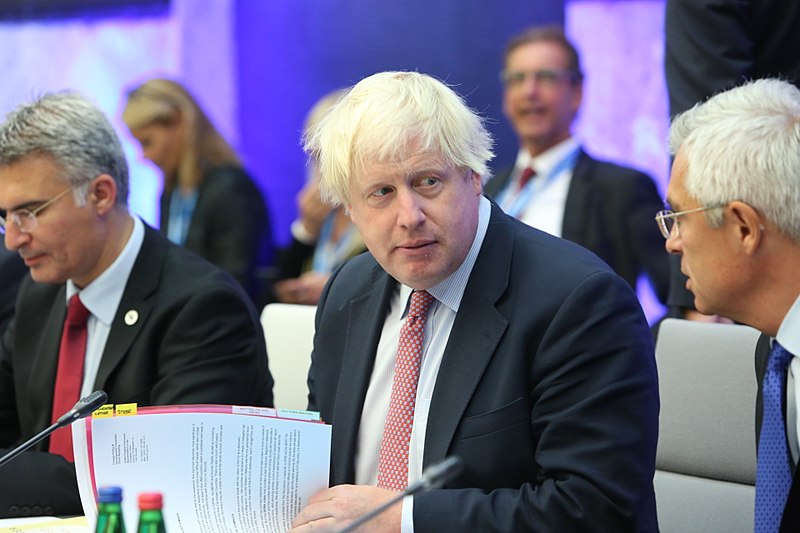 Boris Johnson is an absolute imbecile; nevertheless, he is the favourite to take over from May / Image: EU2017EE Estonian Presidency

Tory Brexiteers believe that if Boris can replace May, and assuming further negotiations with the EU fail, he could win a general election by going to the country and seeking a mandate for a no-deal Brexit. In this way, they believe, a hard Brexit will be delivered. But, as one MP said, “These things sound like a good idea until you end up confronting the voters with it.”

In any case, having Boris as PM would split the Tory Party, as in 1846. Europhile Tory MPs would abandon the party, probably ending up in the so-called ‘Independent Group’ of renegades. On this basis, the government would fall and there would be a general election. This would be the most ferociously fought election for generations.

The British establishment are vehemently opposed to a Corbyn government. Senior Tory Iain Duncan Smith recently called Corbyn “a Marxist whose sole purpose in life is to do real damage to the country”.

The capitalist press have constantly vilified Corbyn as a Kremlin stooge and a former Soviet spy – in other words, a traitor. Former defence secretary Michael Fallon has regularly portrayed Corbyn as a threat to national security. Army generals have openly threatened to mutiny.

It is no accident that a video has circulated of paratroopers using a Corbyn poster as target practice. Given the murder of Labour MP Jo Cox by a deranged fascist, this is a deadly threat.

Despite the smears and slanders, the Labour Party is on course to win a general election.

But once in power, the ruling class will use all kinds of sabotage to undermine such a government. Their biggest ally in this endeavour will be the Blairite Fifth Column in the Parliamentary Labour Party.

These ‘loyalists’ have used every opportunity to attack Corbyn – from allegations of so-called anti-Semitism to the demand for a second referendum. Tom Watson, in particular, has led the charge against Corbyn, running “a party within a party”. 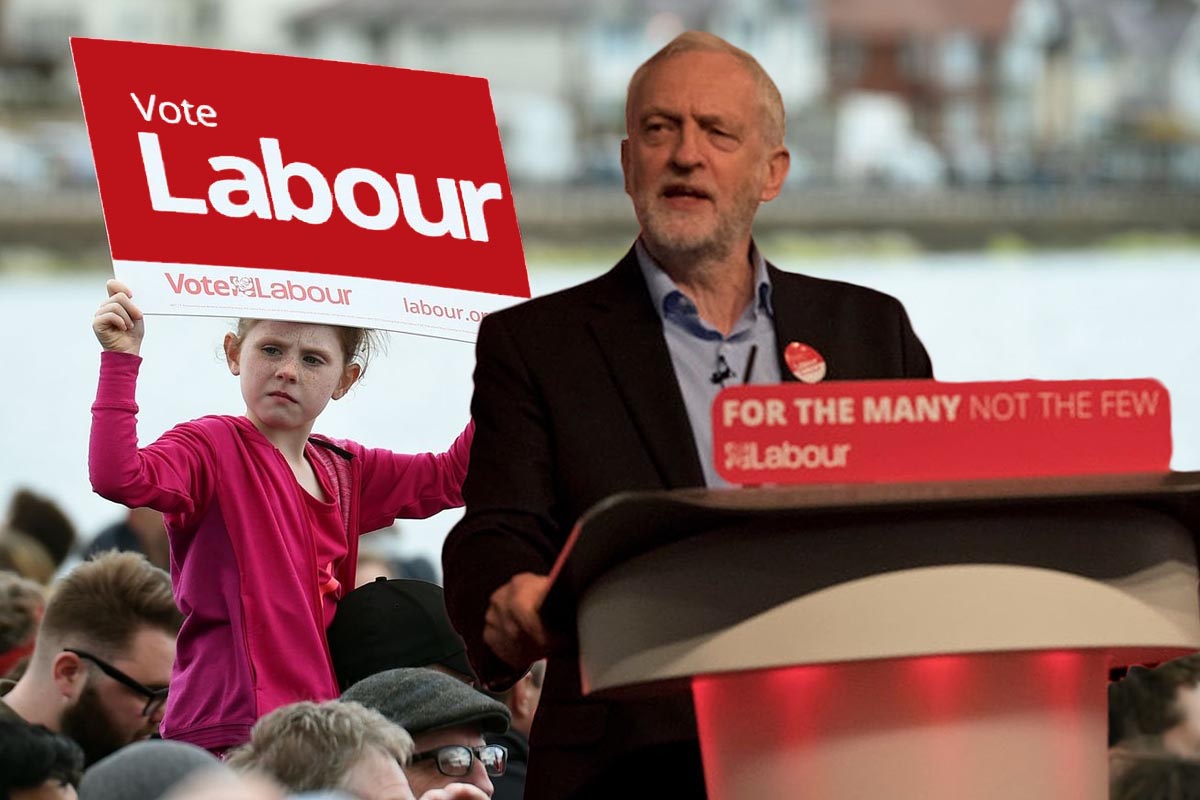 The struggle for a Corbyn government, committed to bold socialist policies, must go hand-in-hand with a cleansing of the Labour party / Image: Socialist Appeal

The Blairites will rebel against any left-wing proposals from a Corbyn government. At a certain point, as with their friends in the Independent Group (now ‘Change UK’), these Tories in disguise will split from the Labour Party, hoping to bring down a left Labour government. That is their future dirty role.

These gangsters need to be cleared out to prevent such future sabotage. The struggle for a Corbyn government, committed to bold socialist policies, must go hand-in-hand with a cleansing of the party. Given the events and opportunities that lie ahead of us, this is a task that cannot wait.

A new stormy chapter is opening in Britain – one in which the ideas and forces of Marxism will play a vital role.