Share
Tweet
This year’s Socialist Appeal conference, which was held in London, showed a significant increase in attendance over last year, particularly of young comrades. Sellers and supporters attended from all over the country to participate in a weekend of debate and discussion.

“You will never build anything without enthusiasm”, stated Alan Woods, the editor of Socialist Appeal in his closing speech to last weekend’s Socialist Appeal conference. “We must galvanise the enthusiasm shown here to build the forces of Marxism in Britain.”

This year’s meeting, which was held in London, showed a significant increase in attendance over last year, particularly of young comrades. Sellers and supporters attended from all over the country to participate in a weekend of debate and discussion. 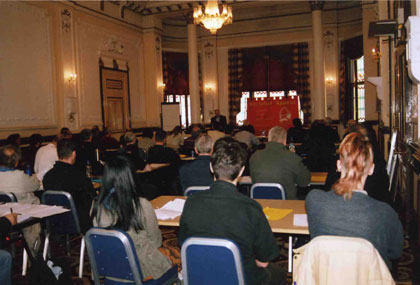 The conference opened with a discussion on World Perspectives and was introduced by Alan Woods who explained the developing crisis of capitalism unfolding on a world scale. “We have entered the most turbulent period in world history. One shock after another is shaking the system to its foundations”, he stated. Alan spoke about the position of the United States and China in helping to keep the rest of the world afloat. He dealt in some detail with the revolution unfolding in Latin America and in particular Venezuela, the key to the world situation.

Speakers from the floor added to the analysis with contributions ranging from the world economy, the crisis in France, the impasse of Iraq and comparisons with the 1970s. In particular, Jorge Martin, who had just arrived back from Paris, gave a first hand account of the mobilisations against the French government and the possible development of a new 1968 situation. 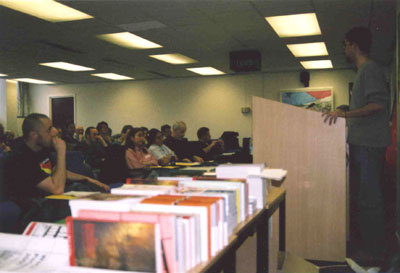 The next session on how to build the forces of Marxism in Britain was introduced by Rob Sewell. Rob outlined the progress that had been made over the previous year. Above all, he showed the tremendous work carried out by supporters of Socialist Appeal in the Venezuela solidarity work in the trade unions and amongst the youth. Primarily as a result of our efforts resolutions supporting the Hands Off Venezuela Campaign were on the agenda of a string of trade union conferences last year, including Amicus, NUJ, PCS, Unison and Natfhe. Again, with our assistance, a resolution on Venezuela was placed before the congress of the TUC and passed unanimously. This work will be expanded over the coming year.

HOV has also held meetings in various universities assisted by Socialist Appeal supporters. As a result of this work our tendency has attracted new young supporters who have been keen to establish solidarity societies on campus. In particular they have used film shows to build support for the Venezuelan revolution.

Conference passed a resolution condemning the attacks on Socialist Appeal supporters in Amicus which have led to the disgraceful sackings of Des Heemskerk, Jimmy Warne and Cathie Willis. This was a political witch-hunt against those who have consistently stood up for union democracy and a militant programme for the union. Two of these comrades were removed recently from their positions in the leadership of the Gazette when the AGM was packed with Simpson supporters, a number of whom were bussed in from the Labour conference in Blackpool. Conference pledged to fight these sackings and to give support to the newly founded Campaign for Democracy in Amicus. “We will take this struggle into all corners of the union”, said Nigel Pearce from Wakefield, “and will turn these attacks to our advantage.”

This session, which covered a whole range of issues, concluded by agreeing to concentrate on the key question of the Venezuelan Revolution and using this to build the forces of Marxism. Above all the need to build amongst young people will be of paramount importance in the next period. 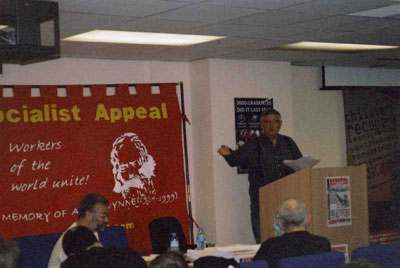 After a report on the sales and finances of Socialist Appeal, conference turned its attention to British Perspectives. A draft document on Britain had been submitted for discussion by the editorial board. This document was introduced by Phil Mitchinson who began his contribution by asking through what stage we were passing in Britain. While events were moving at a slower pace than on the continent, it would be a mistake to dismiss the potential class battles in Britain over the coming period. There has been an enormous accumulation of contradictions below the surface, which could explode at any time. The decay of British capitalism reflected itself in the political degeneration of the ruling class, epitomised by the latest corruption scandals. The massive extension of credit had temporarily postponed a looming economic crisis, only to make matters worse in the future. The British economy has entered a downward spiral, due to its own weakness and its dependence on the faltering world economy, which must eventually lead to a new recession.

The aim of Blair and the ruling class to transform the Labour Party into a capitalist party by breaking the trade union links has clearly failed. The conflict between Blair and Brown reflects not only personal rivalries, but increasingly the unease of the ruling class. They see Blair as their man, and, of course, Brown is no different. The bourgeois may trust Brown but they fear that Labour may not have a sufficient base of support to carry through the attacks the system requires in the next period. The opposition on Labour’s backbenches and the developing militancy of the trade unions is a taste of things to come. Therefore the ruling class are busily rebuilding their first eleven, the Tories, who they will want back in power sooner or later.

The task of Marxism, explained Phil, was to explore and understand the processes taking place under the surface of British society. It was false simply to look at what was taking place on the surface. Only by taking a dialectical view of the situation was it possible to foresee the likely course of events, in order to intervene in them and build.

An international report was given by Fred Weston, who gave an inspiring account of the successes of the Marxist Tendency on an international scale. In all, we have now comrades and sympathisers in 46 countries of the world from the United States to Nigeria, from Denmark to Pakistan. All that Fred could do in the time was to highlight the main developments beginning with Latin America and the successes of the tendency in Venezuela. We had nothing in Venezuela three years ago. Now we have begun to establish important points of support for Marxism in the trade unions, the youth and the Bolivarian movement. A turning point in our development has taken place in Cuba, with the publication of Reason in Revolt by Alan Woods and Ted Grant in the island.

Progress was being made everywhere, but as comrades were able to see on the website, our advance in Pakistan has been tremendous, despite the objective difficulties. Even under a dictatorship, The Struggle comrades organised a congress of 1,500 people and have become firmly established in every province of Pakistan. The work of our Kashmiri comrades has been an inspiration to all comrades.

The work in Europe is also advancing with our success in Italy over the last year. Our Spanish tendency was also moving forward in terms of influence and size, being the only source of Marxist literature in the whole of Spain. Other sections were also recording success and growth.

This inspiring report was a fitting end to the British conference of Socialist Appeal. The mood of those present was expressed in the marvellous financial collection. The excellent appeal, introduced by Kenny McGuigan from Scotland, brought in the magnificent figure of more than £3,600. This is a fitting testimony to the commitment and enthusiasm for the ideas of Marxism and our confidence in the future.