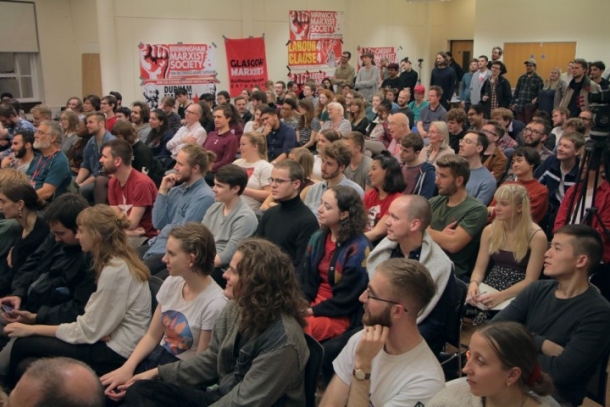 The global economy is slowing down, heading for a new world slump. A rebellion is taking place across the planet, with mass insurrectionary movements erupting onto the streets from Baghdad to Beirut to Barcelona. And in Britain, the Corbyn movement is preparing for the battle of a generation, as a general election looms.

These dramatic events were a fitting backdrop to this year’s Revolution Festival, which saw 350 Marxist activists from across Europe gather in London for three days of exhilarating discussion about the revolutionary ideas needed to liberate humanity from the shackles of capitalism.

The inspiring movements taking place in Chile, Lebanon, Spain, and elsewhere certainly bolstered the mood at the festival, emphasising to comrades in attendance that we are now undoubtedly in an epoch of world revolution. The ideas of Marxism have therefore never been more relevant and pertinent.

This electrifying topical background was added to by an array of fantastic talks and enthusiastic discussions. Both speakers and audience displayed an incredibly high political level whilst delving into important theoretical subjects, drawing out the lessons of history, and addressing contemporary questions facing activists today.

The rousing opening rally of the festival on Friday evening set the tone for the rest of the weekend. Over 200 people packed out the hall of the London Welsh Centre to hear figures from across the labour movement discuss events in Britain and the fight for a socialist Labour government.

Ben Gliniecki, the chair for the meeting, welcomed comrades – in particular those who had travelled from far and wide to attend this year’s festival.

Mike Hogan, a Socialist Appeal supporter from Merseyside and a mover of the motion to restore Clause IV at the recent Labour conference, spoke first. Mike provided his own personal experiences from Liverpool Wavertree CLP to outline the current struggle taking place inside the Labour Party to kick out the Blairites. And he discussed the important lessons we can learn from the experiences of Liverpool in the 1980s, when Marxist activists and councillors in the party led the fight against Thatcher and the cuts.

Paul Holmes, a member of the Unison NEC, then spoke in a personal capacity, discussing how working-class communities have been ignored and neglected for decades. This, Paul explained, is what has given rise to the large anti-establishment mood and sharp political polarisation in Britain today.

Fiona Lali, the national organiser of the #Students4Corbyn campaign, was next up, discussing the vital role that students and youth can – and must – play in the next general election. Young people everywhere are amongst the hardest hit by the crisis of capitalism. And this explains the global revolt of the youth that is taking place – not just with the climate strikes, but also with the recent movements in Latin America and the Middle East.

Ian Hodson, president of the BFAWU food workers’ union, then greeted conference with the news that strike action is set to place in a number of McDonald’s branches nationwide. This, Ian emphasised, is a reflection of the precarious conditions faced by countless numbers of workers in the UK today. The key to fighting back, Ian stressed, is solidarity between workers and unity against the bosses.

Rob Sewell, editor of Socialist Appeal and national coordinator of the Labour4Clause4 campaign, closed the rally by outlining what is in store for workers and youth – both in terms of the attacks that will come as a result of capitalism’s crisis; but, more importantly, in terms of the campaign to get Boris out and Corbyn in. This will be the fight of our lives, Rob explained. But it is a fight that we relish.

The festival continued on Saturday and Sunday with an array of sessions covering all manner of theoretical, historical, and contemporary issues.

Just on Saturday morning alone, attendees were treated to a choice between discussions on the revolutionary events in Latin America; the contrasting economic ideas of Marx, Keynes, and MMT; and the Marxist case for open borders.

In the afternoon, there were further sessions exploring topics such as the fight against climate change; the fall of the Berlin Wall and the collapse of Stalinism; and Frederick Engels’ writings about the origins of the family.

Of particular note was the session on the Chinese Revolution of 1949, which was standing room only by the time Daniel Morley began his introductory talk, and which saw a lively discussion about the years following the revolution and the situation in China today.

Saturday ended with an exhilarating talk by Alan Woods – editor of In Defence of Marxism – about his new book, Spain’s Revolution Against Franco: The Great Betrayal.

Based on his own personal experiences and involvement, Alan explained how the movement to overthrow the Franco regime was a modern-day revolution, with the working class providing the motor force for change. And as with any revolutionary movement, Alan discussed, this period is full of vital lessons for a new generation coming into political activity today.

Most importantly, Alan ended by saying, “it is our duty to ensure that this unfinished revolution will be carried to a successful conclusion – and that, comrades, depends on one thing alone: our ability to build the forces of Marxism in Britain and internationally”.

These inspiring words were followed by an appeal by Josh Holroyd, who called on comrades to dig deep and “make an investment” in the ideas of Marxism.

This plea was met with an enthusiastic response, resulting in over £2,000 raised for the Socialist Appeal fighting fund – money that will be essential in helping to build up our resources and establish a strong Marxist tendency in the British labour movement.

If you would like to contribute further to our fighting fund – including our recent move to take on two new full-timers – then please donate today by clicking here.

The third and final day of the festival saw yet more fascinating talks and discussions, with sessions on the fight against colonialism; the dialectics of nature; and the Troubles in Ireland.

Sunday also saw a variety of talks about Britain’s own revolutionary history, including the lessons from the early years of the British Communist Party; the 1926 General Strike; and the radical mass movement of the Chartists in the 19th century.

These events from history demonstrate that, far from being a ‘conservative’ country, Britain has its own revolutionary traditions. And with the ruling class now facing a profound political crisis, it is clear that we are seeing the opening chapters of the British revolution.

This message was emphasised by Alan Woods in his closing remarks to the weekend, where he outlined why we need a revolution. “It is up to us,” Alan stressed. “Nobody else will do it for us.”

Alan’s words were heard loud and clear, and the audience responded by singing a rousing rendition of the Internationale, before leaving the festival brimming with enthusiasm – ready to go forward and intervene in the struggles and movements taking place all around us.

The sheer range of topics – on economics, history, philosophy, science, and current events – over the course of the festival demonstrated the power of Marxist ideas, which provide us with the understanding needed to overthrow capitalism and fundamentally transform society.

But above all, as comrades emphasised throughout the weekend, the point is not simply to interpret the world, but to change it. This requires us, in the words of Marx, to turn ideas into a material force; to get organised and build the forces of Marxism – in Britain and internationally.

This is the urgent task that Socialist Appeal activists are undertaking. We call on all our supporters and readers to join us in this fight.