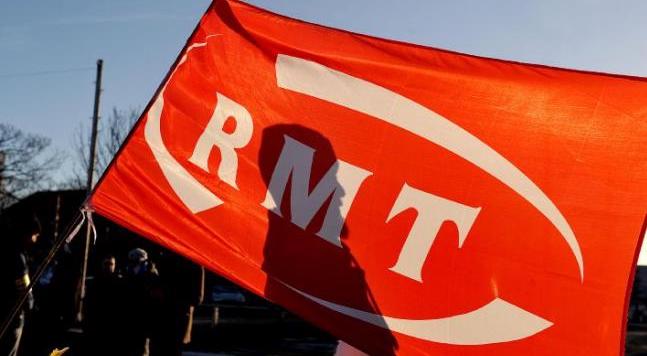 Rail workers have voted overwhelmingly to strike over jobs and safety. The Tories, meanwhile, are gearing up for a showdown, with moves to escalate anti-union laws. The whole trade union movement must respond with militant, united struggle.

The results of the Rail, Maritime, and Transport (RMT) union’s national ballot are a massive success, with 89% voting in favour of strike action on a 71% turnout.

This will give thousands of rail workers a huge mandate for what could be the biggest strike to hit the country in years. And it will give confidence to workers everywhere to take action against the bosses and the Tories.

The union is fighting £2 billion worth of cuts to Britain’s railways. This could see thousands of jobs cut, alongside a pay freeze for rail workers, coming at a time of skyrocketing inflation.

Both Network Rail and the train operating companies, meanwhile, are seeing ever-growing profits, making £174 million and £329 million in profit, respectively, in recent years.

The RMT’s dispute is also over safety. Many of the proposed jobs to be slashed are safety-critical. These Tory cuts therefore pose a risk to the safety of workers and passengers alike.

This ballot result has clearly shaken the government.

Tory transport minister Grant Shapps is set to meet with Prime Minister Boris Johnson and Chancellor Rishi Sunak to discuss how the government will respond. 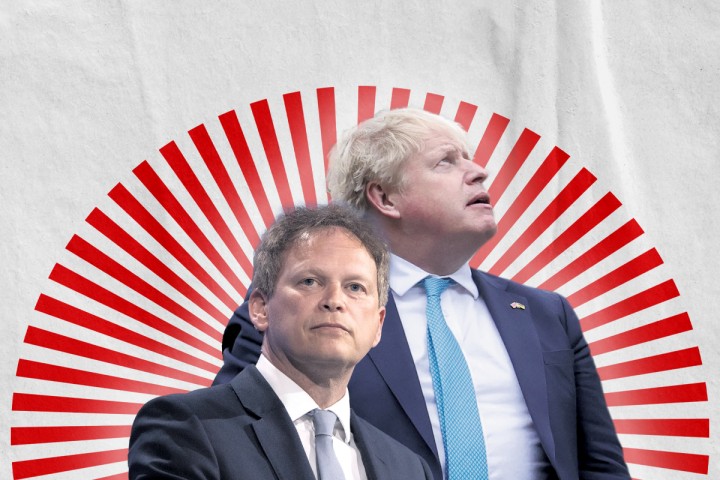 With their threats the Tories are clearly throwing down the gauntlet to the RMT – and indeed to the whole trade union movement / Image: Socialist Appeal

Already, anticipating a vote in favour of industrial action, the Tories have indicated that they would be prepared to effectively outlaw rail strikes.

On 22 May, Shapps told the Sunday Telegraph that the government was looking into passing laws that would legislate minimum service requirements on the railways.

Originally an election promise in the Tories manifesto, such a move would mean a minimum number of rail staff would be forced to keep routes running – de facto banning strike action.

Given Britain already has some of the toughest anti-trade union laws in Europe, this is a serious escalation to restrict workers’ rights even further.

With this threat, Shapps and his fellow Tories are clearly throwing down the gauntlet to the RMT – and indeed to the whole trade union movement.

RMT leaders have responded to these threats with defiance. “Any attempt by Grant Shapps to make effective strike action illegal on the railways,” stated general secretary Mick Lynch, “will be met with the fiercest resistance from RMT and the wider trade union movement.”

Other union leaders have also shown solidarity. Unite general secretary Sharon Graham has laudably come out fighting, saying that her union “will confront head-on and by whatever means necessary, any further attacks on the right to strike”.

“We are now forced to put the government on notice,” Graham asserted. “If you force our legitimate activities outside of the law, then don’t expect us to play by the rules.”

Such fighting talk is exactly the response required from the trade union leaders.

Now the RMT have smashed their ballot result, they will need solidarity from across the movement in their struggle. Union leaders must prepare to back up their bold words with militant action. An injury to one is an injury to all. 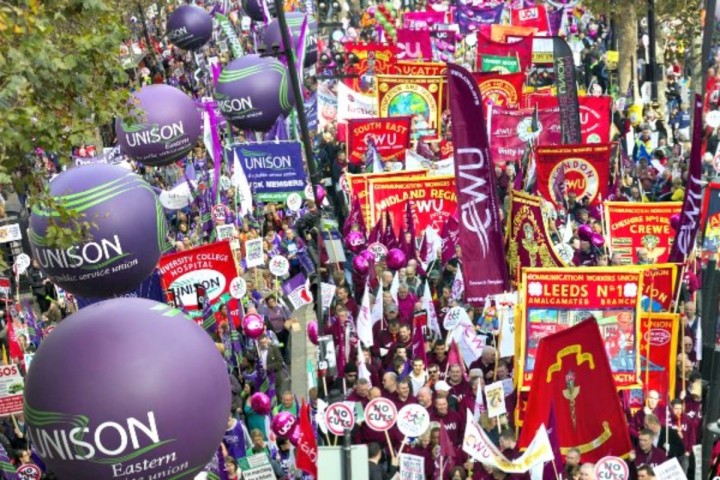 Now the RMT have smashed their ballot result, they will need solidarity from across the movement in their struggle – union leaders must prepare to back up their bold words with militant action / Image: Steve Eason, Flickr

The threat against the RMT follows similar moves against other workers. Education minister Nadhim Zahawi, for example, has suggested a rewrite of the Employment Relations Act, with the specific aim of limiting the powers of the teaching unions.

The proposal is to enshrine the right to have lawyers – not union reps – accompanying teaching staff in meetings with their employers. This is designed to curtail the influence of education unions such as the NEU.

Given that the NEU recently voted to campaign for a national ballot over pay at its recent national conference, demanding at least an 8% pay rise, more Tory attacks on the union can be expected.

Indeed, the year ahead is likely to see repeated clashes between this government of billionaires and their big business mates, on one side, and the organised working class, on the other.

Other unions are also gearing up for big nationwide battles.

Just this week, the Public and Commercial Services (PCS) union voted for a motion at its annual conference to launch a national dispute against government cuts to pensions and pay, with a ballot for industrial action set for September.

This follows an indicative ballot earlier this year, where 80% of PCS members backed taking strike action.

And today, the Communication Workers Union (CWU) is launching its timetable for a national ballot amongst members in the BT Group, in demand of a real pay rise.

The CWU, which has over 200,000 members, is also mobilising workers in Royal Mail (RM), with workplace meetings taking place this week, in order to prepare for a potential dispute against RM bosses over pay.

“Our members are lions,” warned Terry Pullinger, CWU deputy general secretary for the postal sector. “And if you prod the lion, it will attack”.

The cost-of-living crisis continues to bite, with inflation set to hit 10% by the autumn, when the energy price cap is lifted even further. At the same time, the capitalist class continues to record bumper profits.

The working class – in Britain and internationally – is being put through the mill, increasingly ground down from all sides.

All the while, the Tory government – rife with cronyism and corruption – lecture us on the need to ‘tighten our belts’, telling ordinary workers that ‘nothing can be done’ to help them through this crisis.

No wonder that workers are turning to their trade unions to resist the bosses’ assault on jobs, pay, and conditions, and to push for real, inflation-busting pay rises.

The Tories, and the capitalist establishment they represent, can see all this too. Hence their anti-union attacks.

The trade union leaders must demonstrate that all the anti-trade union laws in the world, however, cannot hold the working class back. This means organising and mobilising workers to smash through this reactionary legislation, designed to protect the bosses’ profits.

As Sharon Graham noted, the union movement should not play by these rules – the rules of the capitalists. 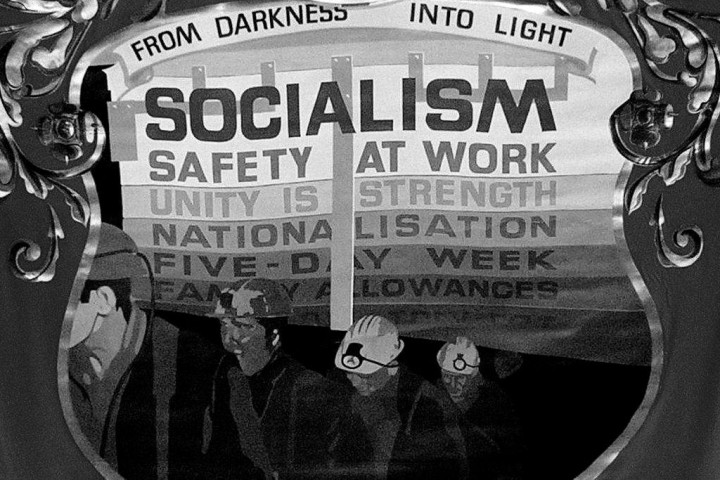 To paraphrase Leon Trotsky, there is no doubt that the time is near when the working class in Britain will take up its cudgel against Boris Johnson; against its lords; and against the cruel and perfidious bourgeoisie / Image: public domain

The working class in Britain has a proud tradition of defying such laws, with Poplar Rebellion leader George Lansbury famously stating that it is “better to break the law, than to break the poor”.

Such militant traditions must be revived.

The ‘jobs massacre’ at P&O Ferries, and countless examples of ‘fire and rehire’, are a harbinger of the onslaught that workers in every industry and sector can expect in months and years ahead.

The bosses have demonstrated the brutal lengths that they are willing to go to defend their profits. The organised working class must take similarly militant measures to defend their lives and livelihoods. We must fight fire with fire.

Whether they are conscious of it or not, the trade union leaders have a historic responsibility on their shoulders. They must show a united resistance.

Already, the TUC is mobilising for a national demonstration on 18 June to “demand better” and “for a new deal for working people”.

This demo must be the opening shot of a general offensive. The ‘new deal’ required for the working class is a bold socialist programme to solve the problems facing ordinary people.

This should include demands for nationalisation – without compensation – of the entire transport system, the energy monopolies, and the big banks, placing these under workers’ control, as part of a socialist economic plan.

Coordinated, united action must be built for and launched across the union movement in order to fight for such a programme: to bring down this rotten Tory government; to bring down capitalism; and to bring the working class to power.

To paraphrase Leon Trotsky, there is no doubt that the time is near when the working class in Britain will take up its cudgel against Boris Johnson; against its lords; and against the cruel and perfidious bourgeoisie. The first thunderclaps of this great impending storm can already be heard.