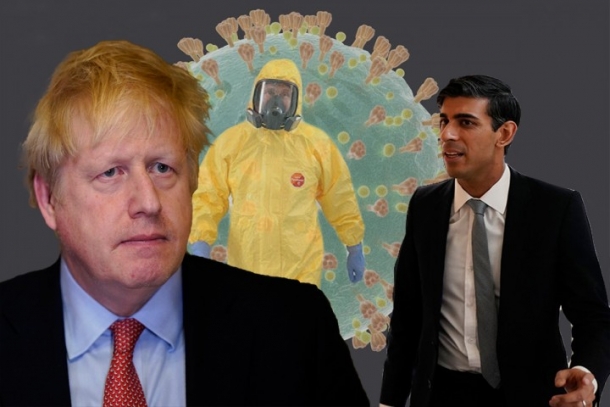 In an effort to save their system, the Tory government has pledged to throw hundreds of billions at the economy. But what they give with one hand today, they will attempt to take back through austerity tomorrow. We must make the bosses pay.

“If anybody had told you at Christmas that this year would be one [with] an enormous symmetric shock hitting all the advanced countries,” says Ms Weder di Mauro, president of the Centre for Economic Policy Research, a capitalist think-tank, “and that this would cost something like 50 per cent of GDP for a few months or maybe longer...the kind of thing that happens in a war, everybody would have said you are crazy.” (Financial Times, 21/3/20)

These are unprecedented times. Some would say surreal. We are certainly in a period of deep crisis: economically, socially and politically. But this is only the beginning. Events from just a few days ago already seem like an eternity away. This is the nature of the epoch we have entered, where things have been turned upside down. Johnson is leading a government of crisis / Image: Socialist AppealWhile capitalist commentators are stunned, Marxists have consistently been explaining for some time that we have entered into an epoch of crisis, revolution and counter-revolution.

Not so long ago, it was suggested that the Boris Johnson government - sitting so comfortably on an 80 seat parliamentary majority - could be in power for 5, 10, or even 15 years. Any yet, overnight, such a perspective has turned to dust. It was a perspective for those who could not see further than their own nose.

“One thing is clear,” explained the Financial Times. “However the coronavirus crisis plays out in Britain, the Boris Johnson government we thought we knew is over. The rest of his premiership will be spent on this crisis and its aftermath. There will be little space for anything else. And that is assuming that he is still in place to oversee the aftermath.” (FT, 23/3/20)

What a turn around! And yet it was this same capitalist newspaper that peddled the myth that the Johnson government would last a generation.

Very quickly – as we, the Marxists, predicted – the Johnson government has become a government of crisis. It has been lagging behind events, dragging its feet, whilst events move at lightning speed.

Johnson’s ‘Churchillian’ image swiftly disappeared. Downing Street quickly had to drop their ‘herd immunity’ strategy for dealing with the virus, which was put forward by the Malthusian Dominic Cummings. This nonchalant and cavalier attitude demonstrated the Tories’ callous outlook. ‘Save the capitalist economy’ was their motto, irrespective of the lives lost. This shows the real ugly face of capitalism.

But Johnson and his team were soon forced to change tack, as the situation began to spiral out of control. The example of Italy stared them in the face, holding up a mirror to Britain’s dystopian future.

To save big business, the Tory Chancellor Rishi Sunak announced that the government was prepared to pump £330bn into the economy. But given the scale of the crisis, this will be too little too late.

Under pressure, Johnson’s government has been forced to shut down non-essential workplaces, alongside subsidising workers’ wages using taxpayers’ money, in order to ensure that employers keep workers on their books.

The bosses’ accumulated profits, meanwhile, are well out of reach from the state, locked away safe in the banks and tax havens. Instead, the Tories have conveniently stumbled across their very own ‘magic money tree’.

Despite these pledges, unemployment is rising dramatically, forcing many to sign onto Universal Credit – less than a measly £100 per week to cover bills, rent, and living costs. In any case, with the civil service 100,000 people smaller thanks to a decade of Tory austerity, the welfare system is overwhelmed by the surge in demand, resulting in huge delays.

Now the Chancellor has been forced to offer the self–employed something also. But they will not be able to get anything until June! To rub salt into the wound, they are told that they will face higher national insurance costs down the line, when this crisis subsides.

This is a foretaste of what is to come. Government borrowing and budget deficits will go through the roof in order to prop up the capitalist system. But this will mean eye–watering cuts to public spending in the future. British capitalism is facing a catastrophe, with most households under lockdown / Image: Socialist AppealWhat we are experiencing is the deepest crisis in the history of capitalism. The empirical pundits say that this is not a crisis of capitalism. But they said the same thing about the 2008-9 crisis, which for them was a ‘financial’ crisis – a mere hiccup. They cannot bear to draw the conclusion that their system is in terminal decline.

British capitalism is facing a catastrophe, with most households under lockdown. We are already in a slump, with Gross Domestic Product (GDP) collapsing.

On 10 March, Capital Economics, a research and consultancy firm, estimated that a pessimistic scenario would see the UK economy fall by 5%. One week later, it believed a realistic scenario was a 15% decline. This will be revised down further in the weeks ahead.

By comparison, between 1929 and 1931, in the early years of the Great Depression, British GDP fell less than 7.5% – only half the current estimate.

Allan Monks of JP Morgan estimates the UK economy will fall by 8% in the second quarter alone. But he adds that “the worst is yet to come”. It has been estimated that non-food retail sales would be down 80% due to the lockdown.

Adam Slater, an economist at Oxford Economics, estimated that a 12–week lockdown would slash consumption by 18% to 32%. “The GDP impacts would be very large,” Slater states, amounting “very roughly” to a staggering 13% to 22% fall.

Another survey for March showed the worst monthly declineon record, breaking all the figures for the 1930s.

All this would be devastating for the public finances – unparalleled in modern peacetime history. One estimate puts government borrowing as rising to £200bn, or 9% of GDP. Given the depth of the slump, however, and its long lasting character, government borrowing could easily rise to 20–30% of GDP, as in the Second World War.

Back then, Britain was able to pay off her post-war debts. But that was thanks to the unprecedented world economic upswing. Such a scenario is ruled out in this period. Not upswing, but further downswing is the prospect.

Robert Chote, chair of the Office of Budget Responsibly, said that only time would tell how bad the economic scars would be, with higher taxes and renewed austerity required to repair the public finances.

It is clear what is going to happen: the enormous burden of huge tax rises and massive austerity will be placed on the shoulders of the working class. The establishment sees the benefits of involving Labour under ‘Sir’ Keir Starmer in a National Government / Image: fair useThe Johnson government is terrified of the social consequences. ‘Get Brexit Done’ has gone out the window. They are trying to stabilise the situation with massive government spending – but this will result in a massive black hole in the finances.

Ordinary people will forever remember how the Tories bungled this health emergency. Johnson’s popularity will plummet like a stone.

That is the reason behind the war–like rhetoric, with talk of ‘pulling together’ for the sake of the ‘nation’. Senior Tories, notably George Freeman, have raised the idea of some kind of ‘National Government’ or council.

With Corbyn out of the way, the more astute members of the establishment see the benefits of involving ‘Sir’ Keir Starmer and the Labour Party. “When Labour have a sensible new leader, Keir Starmer should be invited to Covid cabinet, Cobra and joint No 10 briefings,” said Freeman.

“One argument circulating among some Tories is that Johnson may need to share responsibility for decision-making with Labour and other opposition parties in order to survive the crisis,” states the Guardian (24/3/20). “One Tory MP said there was a political argument that Johnson may be keen to ‘drag Labour in’ so the public do not associate the crisis solely with the Conservatives, if the situation worsens.”

The ruling class clearly hope that by embroiling the Labour Party in this crisis, they can deflect the anger away from Johnson and the Tories. Of course, this is a cynical trap.

The idea of a national unity government, however, got a mixed reaction from opposition politicians. While Starmer has kept silent, Rebecca Long–Bailey is reported to be open to the idea of a more cross–party approach – or even of a national government, given the scale of the crisis facing the country.

This chimes with previous remarks about ‘progressive patriotism’, which have alienated many rank-and-file Labour members, who rightly regarded such rhetoric as pandering to flag-waving nationalism.

Lisa Nancy has also embraced the idea, but believes it better for opposition figures, trade unions, business groups and others to join a ‘national Cobra’, rather than form an official national government. “There is absolutely no reason I can see why someone like Gordon Brown wouldn’t be in the meeting room, helping to steer us through this,” said Nandy.

This programme of class collaboration – embroiling the Labour Party and trade unions – would be disastrous. The labour movement leaders must not allow themselves to be used as a left cover for a discredited Tory government.

They have clearly not learned the lessons of the Scottish Referendum campaign in 2014, where Labour jumped into bed with the Tories and Liberals. The result was that Labour’s support north of the border dropped dramatically, and has still not recovered to this day. It was Alastair Darling and Gordon Brown, we should recall, who led Labour’s ruinous campaign.

Rather than class collaboration, the trade unions should fight for the interests of their members, against the profiteering of the employers. Labour should retain an independent class position, and undertake its own form of ‘social distancing’ – from the Tory and Liberal politicians. Labour should stand boldly for the complete socialist transformation of society / Image: Socialist AppealOn the contrary, as capitalism enters into the deepest crisis in its history – and the ‘market economy’ is exposed for all to see – Labour should be putting forward a bold socialist programme.

The idea of patching up capitalism is a non–starter. Keynesian ‘New Deal’ policies do not offer a way out. Half-measures will not suffice.

A socialist programme would call for the economy to be taken out of the hands of the capitalists and bankers, who have brought us to the edge of ruin, and placed in the hands of working people.

With such steps, we could plan the economy to meet society’s needs – in the interests of the majority, and not the profits of a few parasites.

Already the economy is collapsing at an astounding rate. This reveals the bankruptcy of the profit system. Our health service is plagued by outsourcing and privatisation. The railways are collapsing, and the government is bailing out the private shareholders.

The Tories are incapable of dealing with this national emergency, begging private firms to manufacture ventilators. Instead of this pathetic pleading, the whole of industry should be turned to fight this epidemic. But the market and the profit motive – together with private ownership – get in the way.

If we are to plan the economy and tackle the pandemic, therefore, then we need public ownership and democratic control.

We are not facing a ‘normal’ cyclical crisis, but a systemic and organic crisis of the capitalist system. The danger now facing capitalism is that this deep crisis, with all its contradictions, will turn into a long-lasting depression. This will be devastating for ordinary people’s lives.

In the midst of this capitalist crisis, Labour should stand boldly for the complete socialist transformation of society. As the crisis deepens, more and more will come to realise that this is the only way forward.