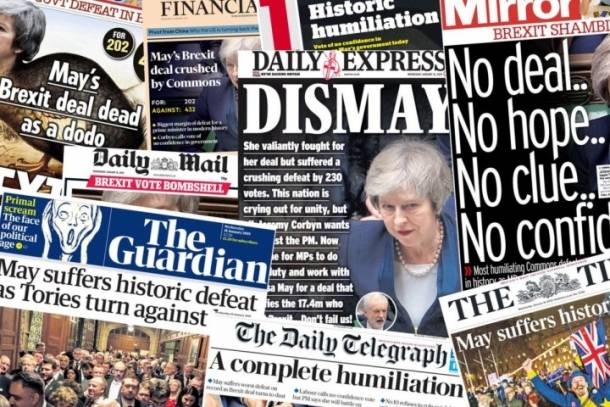 Rejection of Theresa May’s Brexit deal was never in doubt. The question was always by how much. But the scale of last night’s defeat for the Prime Minister – losing by an unprecedented 230 votes – defied even the most pessimistic of expectations. With her proposal firmly spurned by parliament, Theresa May is now set to sail the country into uncharted waters.

The headlines of this morning’s papers said it all. “A complete humiliation,” declared the Daily Telegraph. “A historic defeat,” chimed in both the Guardian and the Times. “No deal; no hope; no clue; no confidence,” pronounced the Mirror.

Everyone – including Theresa May herself – was expecting the Tory leader’s negotiated deal to be voted down. MPs had become, in the words of Robert Shrimsley in the Financial Times, “almost blasé” about what was to be “the most shattering rejection of any prime minister in modern times”.

But the size of the defeat – with 118 Tory MPs voting against their party leader – has nevertheless caused astonishment and panic amongst the ruling class. As Shrimsley continues, “rarely can an event so widely predicted have caused so much shock.”

And yet May remains as Prime Minister. “In a normal era she would already have announced her resignation,” the same FT commentator states. But these are not normal times.

The resoundingly negative parliamentary opinion towards May’s deal has been confirmed. However, there is still little clarity over what will happen next.

Prior to the vote, Downing Street was hoping for a small defeat in the dozens, rather than hundreds. It speaks volumes to the government’s crisis that even such a rejection would be considered a victory. 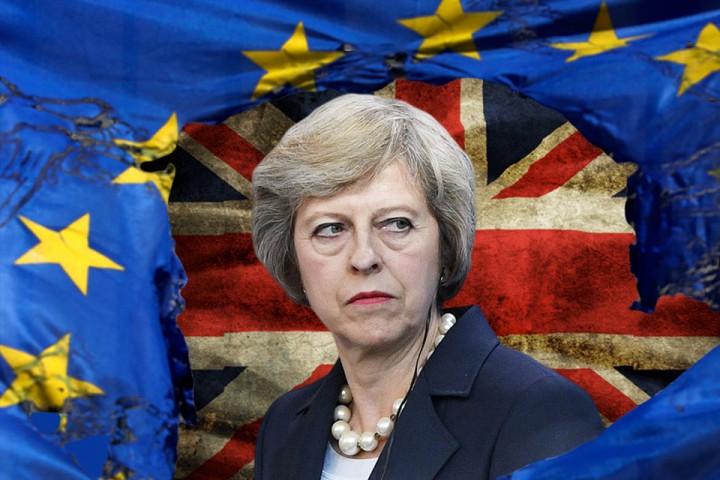 Everyone – including Theresa May herself – was expecting the deal to be voted down. But the size of the defeat – with 118 Tory MPs voting against their party leader – has caused panic amongst the ruling class / Image: Socialist Appeal

With such a result, May thought she could doggedly return to parliament with nothing more than a slightly modified version of her already-rebuffed deal, hoping that a mixture of the carrot and the stick could bring over enough MPs from both sides of the aisle to pass her ill-fated deal.

But last night’s drubbing for the Prime Minister in the House of Commons means that this strategy now lies dead in the water. And it seems that there is no plan B.

EU leaders have already made it clear that there can be no more concessions, with lead negotiator Michel Barnier asserting that the overwhelmingly rejected proposal still represents the “best compromise” Brussels can offer.

The hapless Prime Minister’s authority therefore lies in tatters. Humiliated and crushed, she is now offering to reach out and open up cross-parliamentary talks in the vain hope of finding a way out of the present morass.

This could prepare the ground for an extension of Article 50 and the possibility of a softer Brexit – such as the much-touted “Norway plus” option – that could win over both Tory and Labour MPs. But even this might not be enough to gain a majority in Parliament.

Fanatical Brexiteers and ardent Remainers alike feel bolstered by yesterday’s result and will now dig their heels in. The latter are increasing their cacophonous calls for a second referendum. The former, meanwhile, will settle in and hold tight, eagerly awaiting the approaching 29 March deadline and the no-deal departure from the European Union that accompanies it.

Indeed, government officials are now said to be stepping up preparations for a no-deal scenario – the default outcome in the event that no other alternative can be agreed upon. But what preparations can be made for driving off the edge of a cliff?

Big business expressed dismay following the rejection of May’s deal. “There are no more words to describe the frustration, impatience and growing anger among business,” announced Adam Marshall, head of the British Chambers of Commerce, “after two and a half years on a high-stakes political rollercoaster ride that shows no sign of stopping.”

Theresa May, however, has no time to breathe. With her government in disarray, Jeremy Corbyn has launched a vote of no confidence. This will take place tonight, following several hours of debate in the House of Commons.

But DUP MPs and Tory rebels have already signalled their intention to close ranks and protect the government. After all, their hatred towards the Prime Minister’s Brexit approach is trumped only by their horror at the thought of seeing Jeremy Corbyn in Number 10.

We will therefore be faced with the paradoxical and farcical situation of seeing Conservative MPs, who only 24 hours earlier voted that they have no confidence in their leader, declaring that they do in fact have confidence in her government.

In the words of the Financial Times, “the UK will be left with a prime minister who cannot be removed but cannot manage the most vital issue of the day.”

Faced with such a prospect, the question of parliament seizing the reins has been raised. One proposal has been to instruct the Commons liaison select committee to come up with an alternative to May’s deal. Another is to hold a series of votes on possible alternatives and then bind the executive to carry out the preferred option (if there is one).

That the ruling class and its mouthpieces are openly considering what in effect would be a parliamentary coup against a Tory government can leave no doubt as to the depth of the political crisis in Britain.

Tonight’s vote, meanwhile, will also test the loyalties of Labour MPs. Whilst they may side with their party leader on this occasion, the Blairites such as Chuka Umunna have made it abundantly clear what they really desire: not a Labour government, but a second referendum.

In the wake of this evening’s decision (assuming Tory MPs rally behind the government), the Labour right wing’s calls for a so-called ‘People’s Vote’ will become deafening. Enormous pressure will be piled on Corbyn – from within the PLP and from the whole establishment – to come out in favour of a fresh EU referendum. Indeed, the Labour leader could find himself boxed in on this question, as this is official party policy.

But as we have explained before, such a move would only exacerbate the divisions within society, and would do nothing to solve the problems facing the working class and the poor.

Instead, Corbyn must take the call for a general election to the streets. If this government cannot be brought down through a vote in the House of Commons, then Labour must mobilise workers and youth to kick out the Tories through extra-parliamentary means. 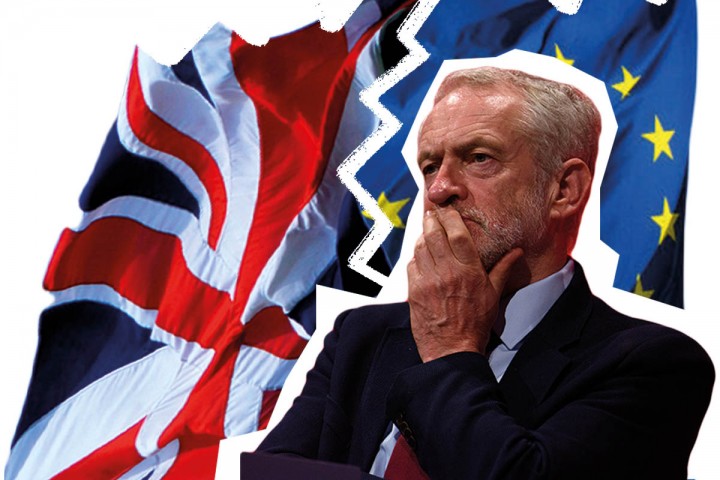 In the wake of this evening’s decision, enormous pressure will be piled on Corbyn to come out in favour of a fresh EU referendum. Instead, Corbyn must take the call for a general election to the streets / Image: Socialist Appeal

Through a mass movement of demonstrations, rallies, and strikes, this crumbling Tory government could be dealt a mortal blow. The gilets jaunes in France have shown the way. But this requires bold leadership.

Whatever option the Tory leader now pursues will only increase the divisions within her party. Any attempts towards a softer Brexit will cause much consternation amongst the hysterical rank-and-file of the Conservative Party, leading to splits from Leave-voting backbenchers – and possibly further ministerial resignations also. Acceptance of a no-deal Brexit, meanwhile, will force Remain-supporting Tory MPs into open opposition.

This demonstrates the impossible position that the Prime Minister – and the ruling class that she represents – now find themselves in. Either they lose control of the Tory Party, the historic defenders of British capitalism, or they completely lose control of the situation. Or both.

Throughout history, it has been seen that revolutions always begin with splits at the top. The coming days and weeks will test Britain’s bourgeois democratic institutions to their limits. And in the midst of this chaotic process, a new political realignment will be forged.

The outlines of a national government are already apparent, with MPs from all parties talking about coming together in the “national interest”. “Westminster's factions and rival camps,” speculates the BBC’s Laura Kuenssberg, “might actually bend or break.”

“The divisions are so intense in both the main political parties that it could also be the moment some of the divisions turn into real splits. That really would be history happening in front of our eyes.”

We are indeed watching history being made. In these turbulent events, we are seeing the breakdown of the system and the prelude to the British Revolution. The status quo has fundamentally failed. Only the socialist transformation of society can offer a way out of capitalism’s dead-end.