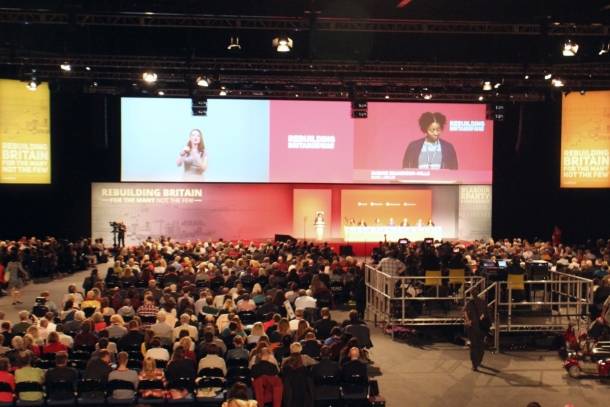 The British Labour Party is currently holding its annual conference in Liverpool, UK. Members and supporters of Socialist Appeal (British section of the IMT) have been intervening, raising our slogans of nationalisation, reinstating Clause IV (committing Labour to socialism) and kicking out the Blairites. The comrades provide this report on the conference thus far, which has already seen a stitch up to keep discussion of mandatory reselection of MPs off the table.

One of the most controversial aspects of this Labour Party conference so far has been the debate on mandatory reselection, or open selection.

The party’s governing body, the National Executive Committee (NEC), decided on Tuesday not to support open selection (a decision they confirmed on Saturday night). Instead they proposed a reform to the existing trigger ballot.

The Conference Arrangements Committee (CAC) furthermore ruled that if the NEC proposals were to pass, then all rule change proposals that covered the same areas would automatically fall, and not even get discussed. It was obvious that the campaign to get rid of the trigger ballot was facing a stitch-up.

On the show of hands in the conference hall, it became clear that the overwhelming majority of local Labour Party delegates rejected the CAC report. However, the trade unions voted overwhelmingly in favour.

The votes for the CAC report (to push mandatory reselection off the agenda) included delegates from Unite, the largest trade union in Britain. This is despite the union voting to support mandatory reselection at its own policy conference back in 2016. In this respect, Unite delegates at Labour conference have gone against the democratic decisions of their own members.

After weighing the 1,500 constituency delegates against the more than 300 trade union delegates, the votes were 53.67 percent in favour of the CAC report and 46.37 percent against. This was a narrow victory for the opponents of open selection. After the announcement, delegates shouted “shame”.

The same would also be true if rank-and-file trade union members had had their say. If Unite delegates had voted along with their conference decisions, it would also have passed. However, the Unite leadership didn’t want to put open selection to the vote, and thus manoeuvered to keep it off the agenda.

The reason, most likely, is that the union tops (and party leaders) don’t want to rock the boat. Open selection would have been like a red rag to a bull for the Parliamentary Labour Party. It would have been a clear warning to all the plotters and schemers on the right wing of the party that have been undermining Corbyn and attempting to overturn the will of the members of the party. It would also have put a serious question mark over MPs’ right to sit for life.

In the subsequent debate, delegate after delegate went up and argued that MPs are not members for life and that MPs should earn the respect of the members: if they do so, they will remain as MPs; but if they don’t, they should expect to be challenged.

The debate over mandatory reselection is far from over, and will continue in both the CLPs and the unions. To rapturous applause, delegates asked for the CAC report to be rejected in order to debate all the constitutional amendments at once. Delegates were clearly indignant that the CAC had stopped a debate on mandatory reselection.

In this debate, Marxists will argue for open selection, and for deselection of all those that have been plotting to undermine Corbyn’s leadership over the past few years.

Despite the eventual stitch-up, the Labour International (Labour Party members abroad) has previosuly organised a packed meeting on open selection on the Saturday afternoon leading up to Labour conference, showing the eagerness of ordinary members to evict the right-wing saboteurs.

Around 120-140 people were present, many of them sitting on the floor or standing up. Five speakers were on the platform: Matt Wrack from the FBU; Emma Dent Coad MP; Huda Elmi, who was just elected onto the Labour Party National Executive Committee (NEC); Rachel Godfrey Wood from Momentum; Paul Mason; and Chris Williamson MP.

The speeches struck a defiant tone. Matt Wrack made it very clear that he thought that open selection was a matter for conference to decide. He also said that it was because of Corbyn that the FBU had re-affiliated to Labour, and were “proud to do so”. 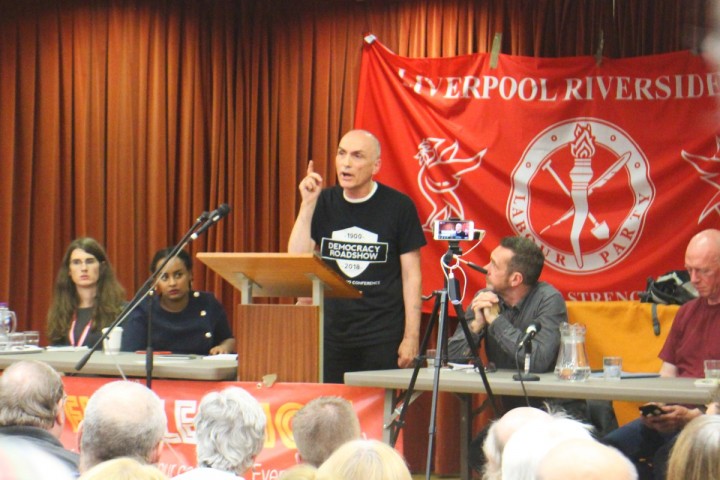 At a packed fringe meeting on 'open selection', left-wing MP, Chris Williamson advocated for greater party democracy. He pointed out that, if Labour had listened to its members, it wouldn’t have gone to war in Iraq, introduced PFI or attacked people on benefits / Image: Socialist Appeal

Matt made the point that lawyers, political advisors etc. are very well represented among Labour MPs, but that McDonald’s workers and others in precarious work are not. Open selection would help change this.

This was a point that Chris Williamson returned to later on, pointing out that “open selection will not shut out trade unions, it will allow many more working-class [Labour] members to stand for Parliament”.

Some noise has been made over the summer about how abolishing the trigger ballot would cut the unions out of the process. But this is clearly nonsense. It would, however, severely restrict the ability of union bureaucracies to guarantee MPs’ reselection.

Anecdotally, the GMB has been busy mass-affiliating branches to CLPs, as each branch would get a vote in the trigger ballot, even if that branch only has one member. In some CLPs, the GMB now controls around 40 percent of the votes in the trigger ballots, meaning this one union could virtually guarantee an MPs’ reselection if they so wished.

Several of the speakers addressed the point that MPs feel entitled to their job. Emma Dent Coad in particular said that if she wasn’t doing her job, she shouldn’t be an MP. She also pointed out that “people are sick and tired of entitled politicians”. Huda Elmi, who will take her seat on the NEC after the conference, said that “representing the members is one of the fundamental aspects of being an MP”.

Chris Williamson added that if Labour had listened to its members, it wouldn’t have gone to war in Iraq, introduced PFI, attacked people on benefits etc. He also added that, although many claim that Corbyn had rebelled in parliament, he had not been rebelling against the Labour Party, but only against the leadership of the party. In fact, he’d been voting with Labour Party members.

The meeting ended with a practical discussion on how to deal with the proposal of the Conference Arrangement Committee. It was agreed to move rejection of the CAC report; although as stated, it was eventually approved by conference.

Despite the setback, this is not the end of the story, and the Marxists will continue to advocate for mandatory reselection and the deselection of Blairite wreckers, to ensure that the leadership of the Labour Party reflects the left-wing character of its grassroots.