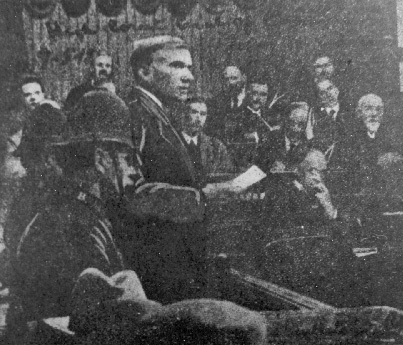 John Maclean was a prominent Scottish Marxist who played an outstanding role in promoting the ideas and cause of Marxism before and after the Bolshevik revolution. Dubbed the "Scottish Lenin", Maclean worked like a Trojan to promote the principles of Marxism amongst the working class of Scotland: at street meetings, pit-heads, work-gates, anywhere workers would gather. He epitomised the "Red Clydeside" that emerged after me First World War, and gave a concrete expression to the mass movement of that time. Repeatedly arrested and imprisoned for his revolutionary stand against the war, Maclean became an outstanding figure-head of the revolutionary movement in Britain. To Lenin, Maclean was one of the "heroic forerunners" of the Communist International; when the Bolsheviks took power he was appointed me Russian consul in Glasgow in January 1918, and as honorary president of the first All-Russian Congress of Soviets/ along with Karl Liebknecht. In this way Maclean's courage and determination will remain an inspiration to class conscious workers of every generation.

However, Maclean also made a number of serious mistakes in terms of tactics and strategy. This is not the place for a thorough criticism of those mistakes. Nevertheless his fundamental error was to succumb to the pressures of Scottish nationalism. Maclean refused to join the newly created Communist Party, advocating instead a Scottish Communist Party.

When this failed to materialise he turned towards the idea of a Scottish Workers’ Republic and the establishment of the Scottish Workers' Republican Party. "Russia could not produce the World Revolution," stated Maclean shortly before his death in November 1923. "Neither can we in Gorbals, in Scotland, in Great Britain. Before England is ready I am sure the next war will be on us. I therefore consider that Scotland's wisest policy is to declare for a republic in Scotland, so that the youths of Scotland will not be forced out to die for England's markets.
"I accordingly stand out as a Scottish Republican candidate, feeling sure that if Scotland had to elect a Parliament to sit in Glasgow it would vote for a working-class Parliament.

"Such a Parliament would have to use the might of the workers to force the land and the means of production in Scotland out of the grasp of the brutal few who control them, and place them at the full disposal of the community. The Social Revolution is possible sooner in Scotland than in England..."
Thus he lost sight of the long held position of Marxists that there cannot be a separate struggle for socialism or a workers government in Scotland separate and apart from that in the rest of Britain. This was a Utopian idea that John Maclean put forward in the early 1920s - an idea which was derided by Lenin and Trotsky as fundamentally false.

This unfortunate turn of Maclean towards nationalism, reflected a frustration with the current political situation. The revolutionary tide that followed the war began to ebb after 1920. The revolutionary movement on the Clyde revealed the revolutionary potential of the Scottish working class. Maclean grew increasingly impatient with the struggle in England which had teen largely side-tracked by the Labour and trade union leadership. It was out of this impatience and frustration that Maclean began to look towards the short-cut of a socialist revolution in Scotland as an example to the rest of Britain. This was a fundamentally false perspective. Within a few years the whole of Britain was shaken by the 1926 General Strike, demonstrating clearly that a socialist revolution was possible throughout the whole of Britain.

Our task is not to emulate Maclean's mistakes, but to learn from them and inoculate the youth against impatience and short-cuts that could lead the movement into the swamp of nationalism. Unfortunately it is precisely John Maclean's errors that were used to justify the turn towards Scottish nationalism, albeit hidden behind socialist rhetoric, on the part of some of the supporters of the Militant newspaper back in the early 1990s. Alan McCombes, who was later to become one of the leaders of the Scottish Socialist Party, quoted approvingly a commemoration to Maclean: "The inscription says: To John Maclean, a man who forged the Scottish link in the golden chain of world socialism.” To emphasis the achievement of Maclean as forging the "Scottish link" is precisely to underline his fatal nationalist mistakes. The whole tone emanating from the leadership of the Scottish Socialist Party today is "the Scottish working class", "redistribute Scotland's wealth", "interests of Scottish workers", etc, etc. This whole emphasis and slant represents a capitulation to nationalism - despite lip service to internationalism. The main criticism we would make of the leaders of the Scottish Socialist Party leaders is that they have succumbed to the pressures of Scottish nationalism and with it to left reformism. They are seeking solutions to the problems of the Scottish workers within the confines of capitalism. They forget that the only way forward for the working class in Scotland, as in England and Wales, is to forge the maximum unity of the class - while at the same time being sensitive to national aspirations – around a programme of socialist transformation of society.

Without class unity, there is no way forward for the-Scottish workers. That should be our starting point. Marxists must always set out from the common interests of the workers of Britain, Europe and the entire world. They should stress the unity of interests of the workers of this Island in a common struggle against the common enemy - the Scottish, English and Welsh capitalists.

This is not for sentimental reasons, but because the economies of Scotland, Wales and England are indissolubly linked. A separation of these countries would bring about a disaster for all of them, but the heaviest price would, as always, be paid by the working class.