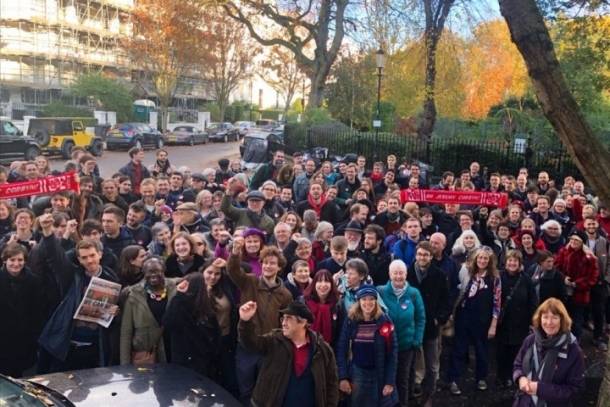 With under a week to go, Labour is taking its campaign up a gear. Activists are being bussed into marginals to bolster local doorknocking efforts. Money is being raised from grassroots donations in order to reach young voters in key seats. And the party’s mass membership is being mobilised to flood the streets over the next few days.

This is on top of the Herculean efforts already made by Corbyn supporters over the past five weeks. Whereas the 2017 election got off to a relatively slow start, Labour’s 2019 campaign has hit the ground running.

‘Unseat’ events – led by prominent left-wing figures such as Owen Jones – have seen hundreds come out at a time on cold winter nights for mass canvassing sessions in important marginal seats. Many more have taken part in rallies and phone-banking. Thousands of Whatsapp groups have sprouted up, allowing members to organise from the bottom-up. And a whole new layer has been brought into political activity, with many taking on leading roles.

The scale of this mass movement is the unwritten story of the election. In reality, there have been two elections taking place in parallel: that covered by the capitalist press – mainly a barrage of attacks against Corbyn, bolstered by a torrent of regurgitated lies and smears by the establishment and their media mouthpieces; and Labour’s mass campaign of optimism, taking place on social media and on the streets.

The ruling class are terrified. They have lost control of the situation. They no longer have any reliable representatives in Westminster. Their anxieties are accurately portrayed in the recent editorials of serious capitalist journals such as the Financial Times and the Economist – both of whom are weeping about the collapse of the ‘centre ground’ and bemoaning the political polarisation taking place in British society (and internationally).

But while the establishment snivels and sobs; while cowards flinch and traitors sneer, hundreds of thousands of people across the country are mobilising and organising, inspired by the opportunity to change society. Regardless of what happens on 12 December, this fact alone will change the political landscape irrevocably. 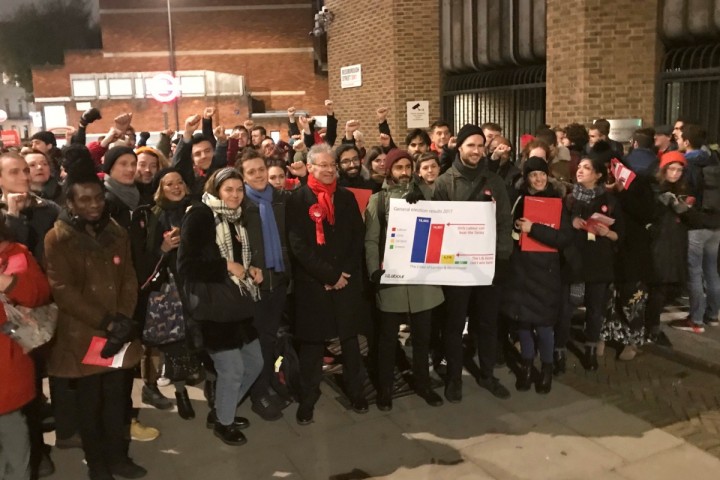 Socialist Appeal activists in London have been throwing themselves into this election. With many London seats already solidly Labour, we – like most Corbyn supporters in the capital – have been travelling far-and-wide to boost the campaigns in important marginals in and around the city.

We have visited the various ‘Unseat’ mass canvassing events, organised by Momentum and Owen Jones, where hundreds have turned up to help knock on doors in various swing seats: from Harrow East and Chingford, through to the Two Cities and Putney. In the video below, for example, Owen rouses the crowd in Hendon, calling on comrades to finish this election battle with the biggest political earthquake in history.

Student comrades in the Marxist societies have also been organising on campuses to get the youth vote out for Labour, as part of the Students4Corbyn campaign.

Most notably, activists in the Brunel Marxist society have played a leading role in mobilising students to give Boris the boot (see below). Socialist Appeal supporters also joined the ‘Fck Boris’ demo in Johnson’s constituency last month, where music was blasted through the streets of Uxbridge as protestors signed up residents to vote.

In addition, we have been organising large group visits of comrades every weekend to different key seats, with dozens of Socialist Appeal supporters turning out in Chingford, Two Cities, and Kensington in recent weeks. And for our final weekend of campaigning, we will be descending on Uxbridge in an effort to make Boris Johnson the only PM in British history to be kicked out of Parliament altogether.

With one last push, we can win. All out for a Labour victory! Vote for Corbyn! Fight for socialism!

Labour pledge to save our NHS in Leeds

A huge crowd of people queued outside Leeds Beckett Student Union on Saturday 30 November in anticipation of Labour’s NHS rally.

This followed the earlier release of documents revealing Johnson’s trade deal talks with Trump. These show how the Tories will provide US big businesses with access to the NHS, boosting the profits of the American pharmaceutical industry, and allowing our public healthcare service to be carved up and privatised. To make matters worse, these privatisations would be protected by international courts against any reversal by a future Labour government.

Labour have revealed an impressive set of plans in their manifesto, aiming to rectify the damage inflicted on the NHS by nine years of Tory austerity. This includes increasing pay for nurses and support staff; bringing back the nursing bursary; and properly investing in the public’s health. On the other side, the Conservatives have yet to even deliver on any of their promises of new hospitals, more nurses, and more money for our health service.

All the speakers at the rally – including Leeds East MP Richard Burgon, shadow health secretary Jon Ashworth, and local parliamentary candidate Jane Aitchson – emphasised the problems of privatisation and the need for proper investment in public health.

Jeremy Corbyn, last on the platform, spoke with great energy about how the preservation of one of Labour’s greatest achievements is so vital at this time, when poverty-related illnesses have swept across the country. In order to save our NHS, Corbyn asserted, we must elect a Labour government on 12 December.

Angela Rayner, shadow education secretary, also gave a powerful speech about education, drawing many parallels with the National Health Service. The state of education is similar to the state of the NHS: underfunded; stretched beyond capacity; without enough support staff and workers, nor enough long-term investment. Labour’s promise to revive Sure Start centres and create a National Education Service are a positive step in the right direction.

A day before the voter registration deadline, the Students4Corbyn campaign joined Labour activists and local candidate Ali Milani to register students at Brunel University. In 2017, the youth came out in record numbers and were instrumental in overturning decades-long Conservative seats to Labour. We now hope to achieve the same in Uxbridge and give Boris the boot. 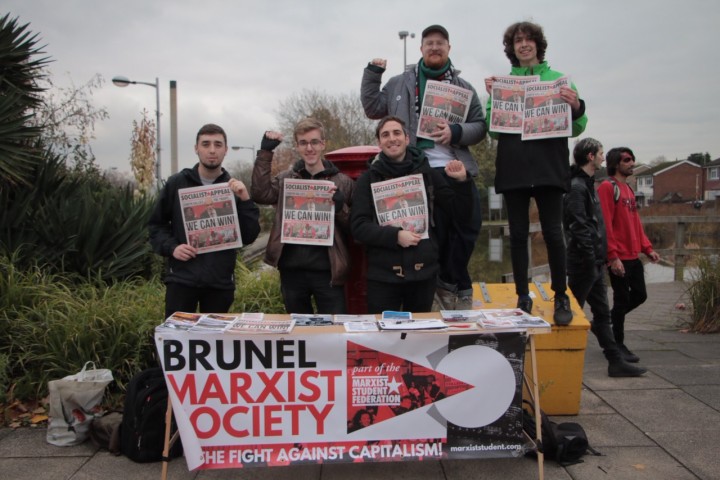 Running in a constituency he has barely visited, Boris’ majority was halved in 2017. Thanks to the campaigning efforts of grassroots activists, it is entirely possible that Labour could shift the vote even further, unseating a sitting prime minister for the first time in history.

Students4Corbyn visited eight student halls; handing out around 4,000 leaflets, and encouraging students to register. Despite the appalling attempts of the establishment to suppress the youth vote, we at Brunel are not willing to be silenced.

We are not trying to mobilise students just for this election, however. After putting Jeremy Corbyn into Number 10, we need to continue fighting to change the system itself.

That is why we in the Brunel Marxist society are building up our forces on campus, discussing with students about socialist ideas, as well as drumming up support for Corbyn. Thanks to our events, stalls, and campaigning, we have established ourselves as a genuine force on campus, with strong links to other left-wing societies, such as the Labour and LGBTQ+ clubs.

Students are clearly open to our message: that we desperately need the radical policies that Labour is promising in this election – but that these demands must go hand-in-hand with the fight against capitalism, and for socialism.

Fighting alongside workers for a Labour victory, students can – and must – be an important current of a mass movement with the capacity to transform society.