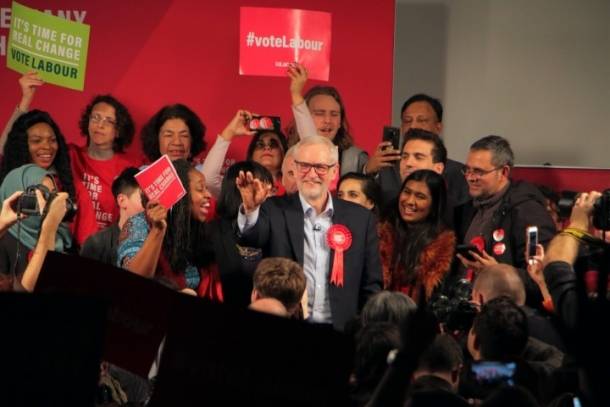 The British general election has entered its denouement. The following article was published by the British Marxists at Socialist Appeal on the eve of polling day, reflecting on the last stretch of Labour's hard-fought campaign, in which thousands of activists have been pitted against the smears and lies of the Tory Party electoral machine.

After six weeks of pounding the streets and flooding social media, Labour’s campaign reached a climax tonight with a massive rally in East London. Hundreds turned out to see Jeremy Corbyn speak at the old Hoxton Docks. Activists chanted, brimming with enthusiasm, as they queued around the block to get in.

Musical acts, NHS workers, and Labour MPs such as Diane Abbott, Emily Thornberry, and Dawn Butler all warmed up the crowd, before Corbyn finally took the stage, delivering his message of hope, optimism, and change. The mood was both electric and emotional – a fitting finale to a momentous election battle.

In reality, however, this has been more than just an election campaign. It has been a social phenomenon – one even larger than the Corbyn mania seen in 2017.

An unprecedented mass political movement has been forged out of this campaign, with thousands of Labour supporters – young and old – throwing themselves into what has fittingly been described as ‘the fight of our lives’.

Last time, starting from a standstill, and with a Blairite bureaucracy running the show from Labour HQ, it took weeks for a similar movement to gather momentum. Even then, the result was beyond all expectations, as workers and youth rallied behind Labour to deliver Theresa May a humiliating blow.

Fast forward two-and-a-half years, and the situation has been transformed. This time Corbyn supporters are in charge at all levels. From day one there have been hundreds of people turning out to canvass in every marginal, every night and every weekend. WhatsApp groups have mushroomed, enabling grassroots activists to organise from the bottom-up. Campaigners are spreading far and wide off their own initiative, getting on coaches and sleeping on sofas in order to bolster efforts in swing seats. And a Youthquake 2.0 – even bigger than the first – has seen millions of new voters registered: more than enough to cause the Tories to sweat.

The ruling class has been sent into a frenzied panic as a result. Johnson and his team are running scared. The PM even had to lock himself in a giant refrigerator this morning, in order to avoid the unwanted questions of prying journalists.

Never before have voters been bombarded by such a barrage of lies and smears. Downing Street has been a volcano of fibs and fabrications, ably supported by the capitalist press. Big business has joined in, with a cacophony of cries denouncing Labour’s programme. Reactionary religious leaders have (unsurprisingly) allied themselves to the Conservatives, adding to the anti-Corbyn slanders. And the BBC have played their reliable role as voice of the British establishment.

All I want for Christmas is a prime minister who doesn’t hide in fridges, politicise the deaths of murdered young men, refuse to look at children on A&E floors, lie through his teeth & stoke racism & hate.

But over this deafening noise has been the crescendoing clarion call of the Corbyn movement. In the final week of the campaign, this burgeoning movement has become an unignorable political army, numbering far beyond the already 500,000-strong membership of the Labour Party.

Over the weekend, massive crowds turned out in Wales – including hundreds in normally tranquil towns such as Carmarthen – in order to see Jeremy Corbyn speak. Next up, on Monday, the Labour leader addressed a crowd of thousands in Bristol. And today alone, in one final push, Corbyn travelled to five different locations across the country on Labour’s red battle bus, culminating in London’s huge event tonight.

Elsewhere on Monday, in the leafy suburbs of Putney, south-west London, an estimated 700 turned out for a mass canvassing session in this important marginal. Many were turned away, with local organisers unable to provide useful jobs for everyone.

Such is the sheer volume of activists, that Momentum are telling Londoners to get out of the city altogether on polling day, to help get the vote out in tighter races elsewhere. This gives a glimpse of the scale of the movement.

About 700 people turned up to canvass for Labour in Putney tonight. Just ludicrous. Logistically it’s genuinely very hard to manage this number of people.

But how ridiculously incredible is this! pic.twitter.com/cMTy9qs3p6

History in the making

But even this is not the denouement. The script of history is still being written. And with a tsunami of activists gushing through marginals all over Britain tomorrow, we have every chance of tipping the scales in our favour.

The polls already show Labour narrowing in on the Tories. As in 2017, the Lib Dem vote is being squeezed out – an accurate reflection of the even greater collapse of the centre-ground. Those who had previously sat on the fence are swinging to Labour in a bid to boot our Boris. Even liberal mouthpiece the Guardian have been forced to accept this fait accompli, reluctantly calling for a Labour vote.

This aptly demonstrates the sharp political polarisation in this election, with the billionaires lining up behind Johnson and the Conservatives, and workers and youth mobilising around Corbyn.

On a seat-by-seat level, things are looking even more dicey for the Tories. According to the latest constituency-level predictions by YouGov, there are 25 places where the Conservative lead is five percent or less.

And even this is likely to be an underestimation of the final result. This survey data was gathered days ago, at a time when the mood was still shifting. Recent scandals around the Prime Minister’s deceit and the crisis in the NHS continue to chip away at the Tories. Further undecided voters will be swayed on the basis of tomorrow’s door-knocking and leafleting. And the currently-unaccounted-for youth surge could yet prove decisive.

Predictions of an outright Tory majority are looking less-and-less certain. The possibility of a Labour government remains on the cards. We still have every chance of putting Corbyn into Number 10 by the end of the week. All that is needed is one last heave, mobilising the full force of this inspiring mass movement that has developed over the last month-and-a-half.

Vote for Corbyn! Fight for socialism!

Whatever happens tomorrow, a whole new generation has been brought into activity for the first time, in this baptism of fire. Regardless of the result, this will change the political landscape forever.

But no matter what the outcome, the task of continuing, building, and organising this movement remains.

In government, we face the challenges of being in power: carrying out our programme in the midst of a deep capitalist crisis, and with the entire weight of the establishment and big business bearing down on us. 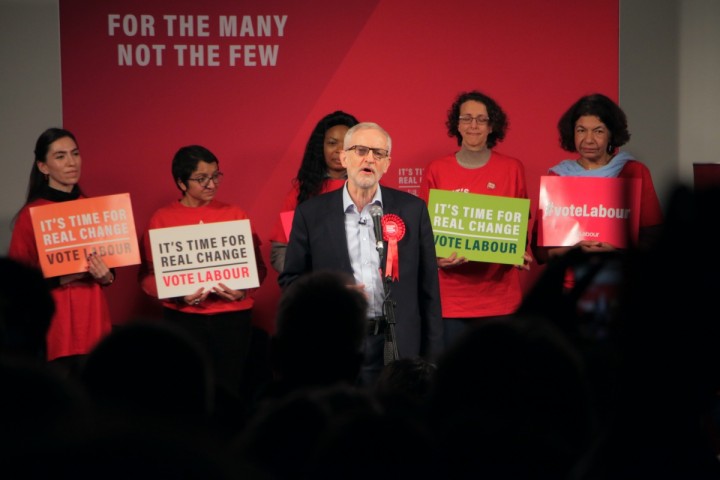 In opposition, the labour movement will need to regather its strength in order to fight the Tories and the onslaught of attacks that they are preparing for the working class.

And in both cases, there is a desperate need to complete the Corbyn revolution inside the Labour Party – kicking out the remaining Blairites and careerists in the PLP, who will waste no time in continuing their sabotage.

All of this requires organisation and direction. But above all, it requires a perspective of where we are heading. In short, it requires leadership. This is why we urgently need to build up the Marxist tendency within the British labour movement. This is the aim that we – Socialist Appeal – have set ourselves: to provide a Marxist voice for Labour and youth.

The movement in Britain is part of a process of world revolution that is unfolding internationally as we speak. From Lebanon to Sudan to Chile: class struggle is on the rise, as workers and youth fightback against the exploitation and oppression of the ruling class.

Everywhere we look, the status quo has failed. The system is broken. There is no turning back. Forward to victory! Vote for Corbyn! Fight for socialism!