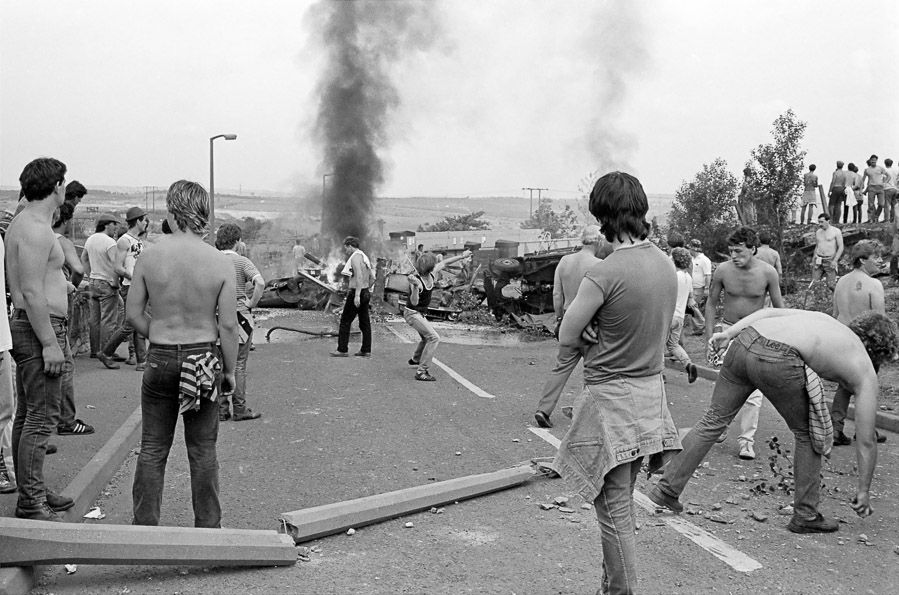 An interview with Nigel Pearce, a member of the National Executive of the National Union of Mineworkers and working miner. He explains how the strike developed and the turning point that it represented for labour relations in Britain. In spite of the defeat he says, "We were right to fight, we had a duty to fight, and I'm proud to have fought, and I'm proud of all those I fought alongside."

Socialist Appeal: What were the lessons of the strike?

Nigel Pearce: The strike is full of lessons. One of the main ones is the need for unity among the working class, that stands out above all else - unity is strength, and united the working class can achieve anything. Divided we are weak, and even small divisions can have a destructive effect. If you have such divisions it becomes a very risky game, and it leads to long, bitter, drawn-out strikes.

Above all we need a strong and united leadership in the movement that will support other groups of workers in struggle, and is prepared to take a courageous stand.

From the beginning we could see we had problems with unity. Some areas were refusing to come out saying the union had not held a national ballot. In Yorkshire we were solid but we could see that there were problems around the country.

But at the time there was great confidence among the membership, after the victories in '72 and '74, and the strong traditions of an undefeated labour movement. The leadership thought they could achieve unity quite easily without a ballot. There was also a certain feeling of inevitability; we couldn't afford not to go on strike.

But at first the relations between the areas were friendly. I remember as a young miner going to Nottinghamshire to picket. At first the picketing was very peaceful and there was a very friendly relationship between us and the Notts. Miners.

At the beginning of the strike it would have been possible to win any ballot. That might not have created unity but it certainly would have given our detractors less ammunition. But confidence was running high in 1984 and many miners believed that the dispute could be won without the ballot. Clearly that was a mistake, and it is something to remember in future battles that it is very important to achieve as much unity as possible in the opening stages. This gives enemies in and outside the movement less ammunition.

SA: What do you think have been the consequences of the strike?

NP: There have been many consequences starting with the destruction of the mining industy. The who labour movement was pushed back. Industrially and politically this had huge ramifications. Workers came under attack everywhere. In their own organisations the right was able to push unchecked to the forefront and 'new realism' was born which has led to the current right-wing labour government. The idea of "social partnership" and in many ways the triumph of Blair finds its roots in the period after the strike.

SA: What is the future of the coal industry in Britain?

NP: The future is now bleak for the mining industry, we are down to 13 deep pits and the closures are still going ahead. In the next period we are looking at the closure of the Selby pit which will lead to the loss of many more jobs including my own.

What was left of the mining industry was privatised in 1992, and the union still calls for total renationalisation. But the reviews are ongoing, and we have a total lack of government support. In 2 years time there will only be 5 or 6 pits left. And a recent government review predicted that there will be no pits left in 10 years time.

We need an energy policy that reflects the needs of the country. This will be a big question in the future - they are making a big mistake by allowing the last of our deep mines to close.

This is typical of the short-sighted capitalist class in Britain today who have developed a culture against manufacturing. A certain section of the establishment have convinced themselves that the British economy doesn't need manufacturing, and that they can do fine without it. But this is pie in the sky and in time it will show what a terrible weak state the British economy is in.

SA: Was it worth it?

The defeat of the miners gave them a clear run to carry out their programmes. They introduced the anti-union laws which was an attack on the entire movement, they've taken on and defeated union after union. British industry has been dealt a heavy blow, the nationalised industries were privatised and most of them have collapsed, like coal, like steel, car making, and shipbuilding.

And all this stems back to the time of the defeat. So yes we were right to fight, we had a duty to fight, and I'm proud to have fought, and I'm proud of all those I fought alongside. The miners' strike was a turning point in the history of the movement.

SA: What were the main reasons for the strike?

NP: Nowadays most people accept the political nature of the strike, but at the time many people didn't see that. Many people said that it was a purely industrial dispute. But from the point of view of Thatcher, MacGregor and the ruling class it was very much viewed as a political question.

The labour movement emerged from the 1970s very confident and undefeated, the miners had come out victorious from disputes in '72, and '74 when we toppled the Heath government, and so we were regarded as the advance guard of the working class.

Following on from the historic victory in 1974 the Tories put together the Ridley Report, which was basically their programme for how to defeat the unions. The Thatcher government had its own political agenda of large-scale privatisations and cuts in public services. But to carry them out they first had to take on the trade union movement and its advance guard - the NUM. The Thatcherites knew that if they could defeat us they could walk over the labour movement

The first attempt to provoke us came in 1981 with Thatcher's plans to shut 50 pits. The union immediately balloted for action, and got a solid majority in favour. The government temporarily backed down. At the time it was presented in the press as a U-turn, but it was actually more of a side-step. They used classic delaying tactics because they were not prepared for a showdown at the time.

But following 1981 they instructed power stations to start stockpiling coal in preparation, and they began using tactics to sow divisions within the union in line with the conclusions of Ridley. MacGregor who served his apprenticeship as the hatchet-man in the British Steel strike was installed at the head of the NCB to lead the attack. So they were making serious preparations to take us on.

The government was very well prepared but in some ways the labour movement wasn't so well prepared. In Yorkshire we could see that a dispute was coming, the defeat of the steel workers, and the appointment of MacGregor made it inevitable.

The spark came when they announced the closure of 5 pits initially, and later extended this to 20. This was intended as an act of provocation because they knew fine what the response would be. The final spark came with announcement of the closure of Cortonwood in Yorkshire, with that the union immediately called out the workforce.

SA: What kind of support did you get from the wider labour movement?

NP: Initially we received a lot of support from the movement, both nationally and on an area by area basis. And support among the local communities stayed solid during the dispute.

The working class has an instinctive capacity for organisation. When it became clear that it was going to be a long dispute we began to get a lot of support from mining communities, and non-mining communities alike. Initially many of these initiatives were organised by the union but later whole communities began to mobilise in support. Many community based initiatives played a key role in the strike such as women's support groups, soup kitchens, and people in the local areas putting up picketing miners who had to travel away from home.

We had some problems with some of the national union leaders along with the Labour leadership. At first a lot of them did not see the dispute for what it was. It was seen by many as a normal industrial dispute and they didn't see the government’s political motivations, and most of those that did tended to stand back.

And when the problems began to occur in Nottinghamshire it gave Kinnock and the Labour leadership, along with the right-wing union leaders an excuse not to support the strike. We could see it at quite an early stage. Within weeks certain sections of the Labour Party and trade union movement were wavering and didn't give support. I believe that if we had got the support we needed the strike would have won.