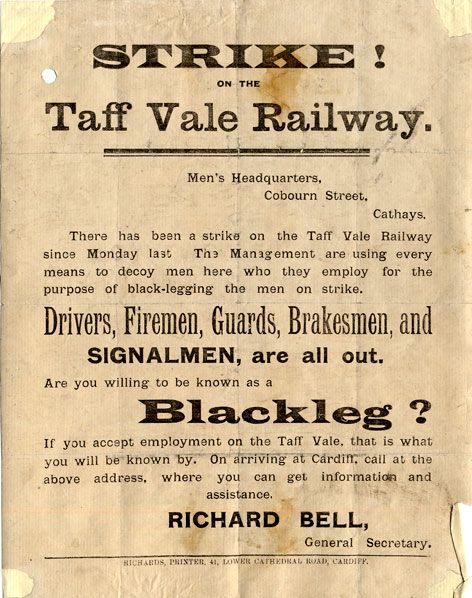 An incoming Labour government is not committed to repeal most of the Tories anti-union legislation which has made strikes more difficult than anywhere else in Europe. They are not prepared to legislate to guarantee the right to strike as in most other European countries. Blair and Blunkett intervened in the post office dispute, on the employers' side by calling for reballoting of the membership. This will have alienated post office workers from the Labour Party, precisely the people whose votes are needed if Labour is to win the next election.

This has come at a time when the government is on the verge of publishing a Green Paper which would  effectively push the trade unions back to the beginning of the century. Iain Lang, secretary of state for Trade and Industry, favours removing the immunity of trade unions from being sued for damages during an industrial dispute in a 'public monopoly service'. He claims that the public were held to ransom over the summer by the tube and post office workers. Now the customers and businesses must have the right to sue for damages for losses incurred in such disputes. This would make the unions open to crippling damage claims and would effectively make strikes impossible in the public services.

In 1901 the Taff Vale Company sued the Amalgamated Society of Railway Servants for damages incurred during an otherwise successful dispute. The House of Lords upheld this decision and the union was ordered to pay £23,000 in damages. This prosecution followed a decade of attacks on trade union rights. The newly formed unions for the unskilled workers had suffered loss of membership due to unemployment. Employers recruited the unemployed, including criminal gangs to break strikes, and a whole series of court decisions deprived the unions of the right to a closed shop and to refuse to deal with non-union firms.

The Tory press launched a tirade against the unions, calling them 'our national mafia' and called upon the state to protect the public from 'working class tyranny'.

The Taff Vale case had an immediate impact on the newly formed Labour Representation Committee. It was essential for the unions that legislation be put through Parliament to reverse this judgement and guarantee unions immunity during an industrial dispute. The lack of trade union support for the LRC changed. In 1900 it had less than half the trade union movement affiliated. Key unions like the Miners Federation saw the implications of Taff Vale for themselves and switched to Labour from supporting the Liberals. Within two years the affiliated membership of the LRC had doubled from 455,450 to 861,200. By 1906 now called the Labour Party it was over 900,000 strong and had returned 29 MPs to Parliament. These 29 MPs were able to exercise pressure upon the Liberal Government to pass the Trades Disputes Act of 1906. The behaviour of one employer had been sufficient to cement the links between the trade unions and the Labour Party. The ruling class now had to face a labour movement which was going from strength to strength and able to exercise influence in Parliament as well as on the industrial front. The years of the Liberal Government saw increasing industrial militancy with disputes in all the major industries such as mining, the docks and the railways. A triple alliance was forged between the unions of the three main industries. Amalgamation Committees were set up and the number of trade unionists increased. Increasingly trade union militants were being pulled towards revolutionary ideas such as syndicalism and workers control. Suffragettes and Irish nationalists took direct action to achieve their aims. It was these years which saw 'the strange death of Liberal England'.

There were also changes afoot in the Labour Party itself. The Labour Party became more representative of the trade union movement and of the working class as a whole. In its early years trade unionists had represented a minority, the best organised section of the working class. Inevitably these were the skilled workers, those who could sustain employment and a bargaining position throughout the years of slump. During World War 1 engineering workers took action against dilution of industry, and lowering of wages. This was the process whereby women workers were recruited to work in the munition plants at lower wages. However skilled workers were to play a key role in the organisation of the unskilled, if only for their own protection. Today some people say that the unions now represent some of the best paid and most secure workers. Workers on short term contracts and part timers are under represented. However that could be said, at one time, of the dockers yet were a casual workforce at the beginning of the century. Trade union membership has been subject to fluctuation. At the beginning of the century British capitalism was beginning to break down craft barriers which provided the basis for a more homogeneous working class, throughout 20th century. This process has been reversed in the 1980s with employers resorting to Japanese (and Victorian) practices of 'core' and 'peripheral labour'-the equivalent of the Victorian skilled and casual labour.

The growth of trade union affiliation to the Labour Party was accompanied by a rebellion against pacts with other political parties, such as the Liberals in Parliament. In 1907 the Conference called for control of the Parliamentary Labour Party by the annual conference. The limits of parliamentary action were seen. The 29 Labour MPs had secured the Trades Disputes Act and an 8 hour day for the mines, but this had not prevented evasive action by the mineowners or the decline in real wages between 1900-1909. Trade unionists had looked to the Labour Party to resolve their problems with legal restrictions. They now saw the limits of action in Parliament. The same process has been seen many times in the history of the labour movement and will be repeated again if disillusionment sets in under a government led by Tony Blair. At the present time trade union leaders are loyal to Labour because they want an end to the repressive regime of the Tories. But once a Labour Government is installed, members will want to see a reverse of the cuts inflicted over the past fifteen years.

The Labour Party's commitment to socialism was raised each year by Marxists who were active in the Party. Members of the Social Democratic Federation were active in the Party and moved resolutions, although the SDF itself had ceased affiliation, to the Labour Party. One independent socialist, Victor Grayson, was also elected to Parliament for Colne Valley as a protest against the class collaborationist policies of some of the Labour MPs. In 1908 the following resolution was passed: "…that in the opinion of this Conference, the time has arrived when the Labour Party should have as a definite object, the socialisation of the means of production, distribution and exchange, to be controlled by a democratic state in the interest of the entire community, and the complete emancipation of labour from the domination of capitalism, and landlordism, with the establishment of social and economic equality between the sexes."

The resolution which predated the formal adoption of Clause 4, part 4, was carried by 514,000 to 469,000 votes. The mover of the resolution said that he spoke from his experiences as a trade unionist. His union, the Engineering Society, had existed for 56 years but its aspirations had not been realised. There was unemployment in the engineering community and a standard of living far short of that 'which our forefathers desired.' This could only be due to the 'private ownership of the means of life'. His union had long accepted the limits of trade unionism and it was written in the rulebook that they would promote the interests of workers only until 'some more general principle of operation could be guaranteed in society, guaranteeing to every man, the full enjoyment of his labour.' With this resolution the link was forged between trade unionism and socialism. The roots of socialism in the Labour Party were there from the outset. This was regretted by the quasi-Liberals. It was also not understood by some of the Marxists in the SDF who were setting themselves up against the Labour Party on the grounds that 'it was not a socialist party.' Inevitably the struggles which took place led workers to draw socialist conclusions and that was reflected in the Labour Party itself. Keir Hardie claimed that it was the Labour Party rank and file which practised the marxian policy of class struggle, whilst its critics reduced Marx's historic formulae to a set of meaningless phrases.

The lessons for today are clear. The events of the last few years are the result of the defeats which the labour movement has suffered since 1979 - they will be reversed. The alternative of building a new party is not an option.

In 1909 another attack on the labour movement was launched in the form of the Osborne Judgement. This was a ruling upheld by the House of Lords that the unions could not use their funds to finance political causes. This meant that they could no longer fund Labour MPs. The judgement was reversed by the Trades Union Act of 1913. But the funding of Labour by the unions was to come under attack again after the defeat of the general strike of 1926. An act of 1927 made trade unionists contract in, rather than contract out to pay a political levy to Labour.

The ruling class in Britain have been eager to break the links between Labour and the unions. They cannot tolerate the second main political party being in the pay of the trade union movement. This has clearly marked Labour as a class party. The Tories of course obtain millions from big business, including increasingly sources from abroad. They would like a safe second party of capitalism, like the Democrats in the USA who could take over when the Tories were discredited. Blair would be keen to oblige them.

In the 1950s and 1960s trade union leaders stitched up Labour Party conference votes with the block votes. No criticisms were made of lack of democracy and accountability in those days. Even in the 1970s when the Labour Party moved to the Left the trade were a 'moderating' influence compared to the left wing constituency activists who were directly elected. At other times of crisis though, such as in 1931, the TUC stood against the harsh programme of cuts in wages and unemployment benefit demanded by the international bankers after the crash of Wall Street. The threatened run on the pound led the bankers to insist that the Labour Chancellor of the Exchequer balance the books to ensure that Britain stayed on the gold standard. Although a majority of the Labour Cabinet had been prepared to make these cuts there was no way that they would have been endorsed by the labour movement. The prime minister, Ramsay Macdonald, resigned and a national government was formed. Could it be that today the sort of programme the European bankers may want from a Labour Government, in order to take Britain into a single European currency would prove to be unacceptable even to the most right-wing trade union leader? At the end of the day trade unions exist to defend the living standards of their members, and there are limits to how far trade union leaders can depart from this.

The campaign to maintain the trade union links with the Labour Party and the campaign to 'Keep the Party Labour' will receive support from activists in the movement, young and old, both on the left and the right of the party. The infiltrators from the 'Millbank Tendency' have nothing in common with these traditions. They will be here today and gone tomorrow when the Blair experiment inevitably backfires.