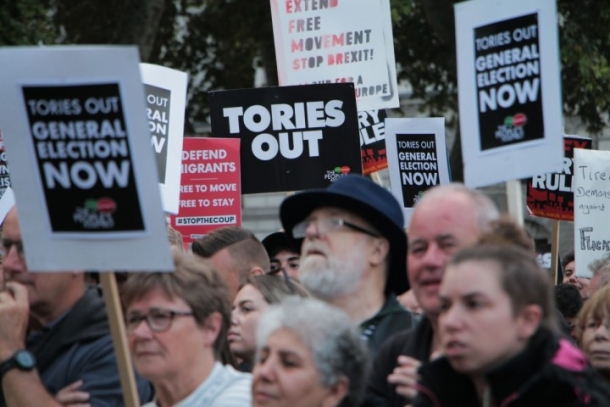 His government is just two days old, but Boris Johnson has already managed to lose his majority and rack up two defeats in the House of Commons. No government in history has faced such an immediate losing streak. This demonstrates how weak the Tory leader and his regime are.

Everything is balanced on a knife edge. The situation is changing by the hour. Events could rapidly swing in either direction. This reflects the instability and volatility that is inherent within this deep crisis of Britain’s entire political and constitutional system.

It is impossible to follow the cat-and-mouse games taking place in Westminster. Having been defeated tonight, there are rumours that Boris may seek to sabotage MPs’ plans through other means. Tory peers in the House of Lords might filibuster the Brexit delay bill passed in the Commons tonight. Or Downing Street could refuse to send the legislation to the Queen for royal assent. 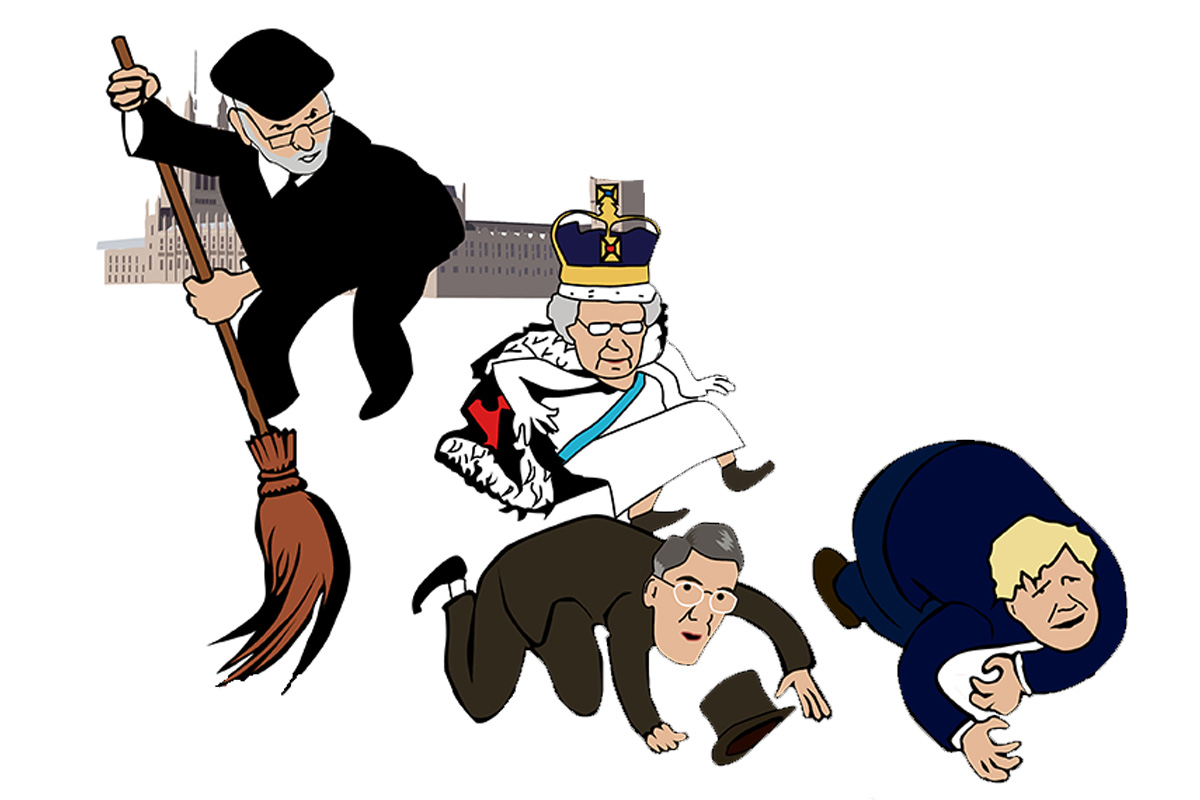 With a bold campaign, mobilising workers and youth around class-based issues, Labour can boot Boris out of Number 10 / Image: Socialist Appeal

But all of this just delays the inevitable. With the Prime Minister now blocked in Parliament, one thing is clear: Britain is hurtling towards a general election.

Johnson has even suggested that he will call an election himself, in order to gain a new majority and see through his pledge to carry out Brexit before the 31 October. But many MPs are worried that the PM could choose to hold the election after this Halloween deadline.

The Liberals and Blairites have therefore been pressuring Corbyn not to fall into Boris’ “trap”. The establishment are desperate to avoid a no-deal Brexit at all cost. They therefore want a cast-iron assurance of an Article 50 extension before agreeing to a general election.

But Corbyn and Labour have nothing to fear from a general election, either before or after Brexit. On the basis of a bold campaign, mobilising workers and youth around class-based issues, Labour can take the fight to the Tories and boot Boris out of Number 10.

In reality, with protests bursting onto the streets across the country, and with Johnson offering a “people vs Parliament” contest, we are already in the middle of an election campaign.

Painted into a corner, Boris is going for broke. He is pinning everything on the question of Brexit, using demagogic rhetoric, appealing to the rabid rabble that makes up the Tory membership, and attempting to outflank Farage’s Brexit Party.

But this is a high-risk strategy. For every vote Johnson hopes to gain from Leave-voting areas, he will potentially lose one to the Liberals or Labour elsewhere. Already, the Conservatives look set to lose all their Scottish MPs, with Ruth Davidson jumping ship before it sinks.

Meanwhile, the Tory leader has promised to purge his party of any Remainer ‘rebels’, including those Conservative MPs who have voted against him in the last two days. This would complete the transformation of the Tory Party into a right-wing populist outfit, confirming that the ruling class has completely lost control of their once-reliable representatives.

The capitalists have run out of options. In response to the concerns of the bosses, Boris famously responded: “fuck business”. Corbyn’s Labour, meanwhile, is pledging an “irreversible transfer of wealth and power in favour of working people”. So who now will defend their interests? 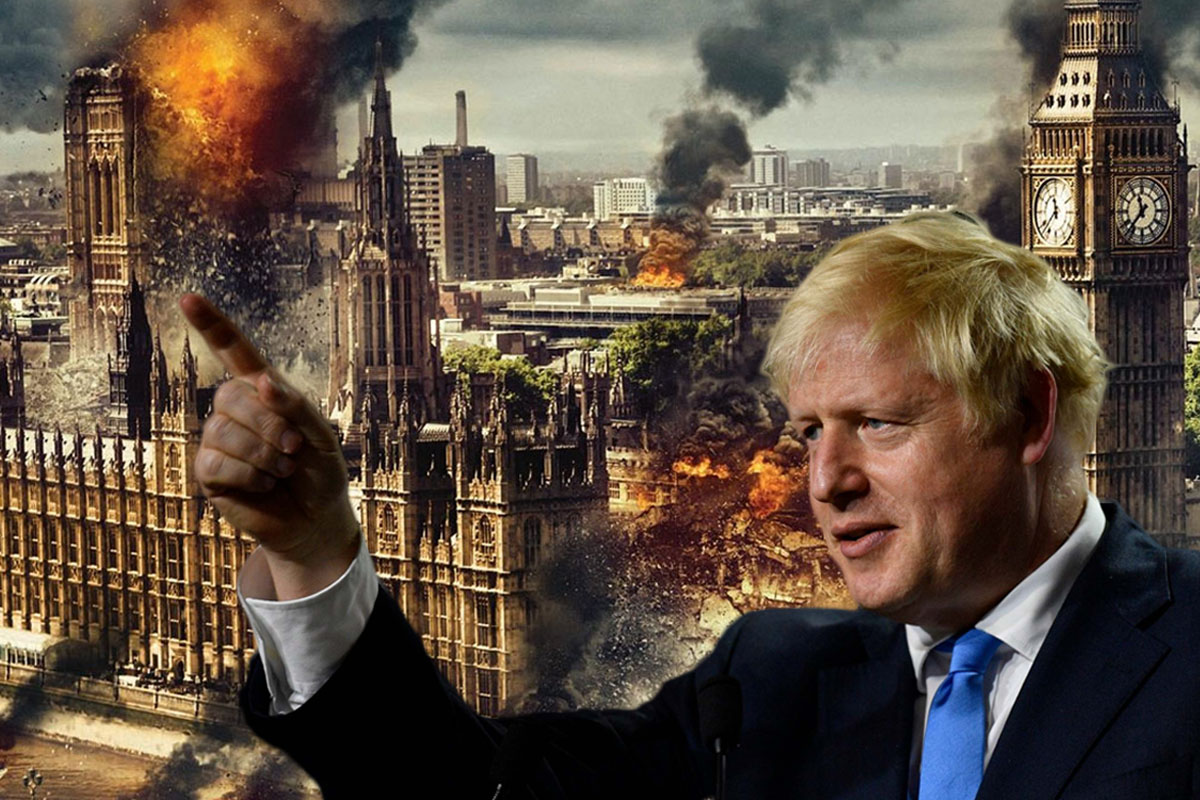 Under Johnson, the Tory Party is turning into a right-wing populist outfit, confirming that the ruling class has completely lost control of their once-reliable representatives / Image: Socialist Appeal

“Voters are effectively being forced to choose between Mr Johnson and the serious possibility of a no-deal Brexit or Jeremy Corbyn’s radical left agenda,” states Robert Shrimsley in the Financial Times, the mouthpiece of British capitalism. “It is going to be a painful contest for those who think of themselves as centrists.”

It says it all that the liberal establishment are currently forced to rely on Corbyn to lead the opposition to a no-deal Brexit. Even formerly fierce Corbyn critics, such as Tory journalist Nick Robinson, are now lavishing the Labour leader with praise for his “statesmanlike” behaviour.

As soon as a general election campaign begins in earnest, however, all of the Westminster muck and parliamentary froth will quickly be washed away. The gloves will come off and the real battle will begin.

Voters will be confronted with a clear choice: between a reactionary Boris-led Tory Party, hellbent on pushing through attacks on the poor and tax cuts for the rich; and a Corbyn-led Labour Party, which will be fighting the election on a programme of radical left-wing demands. 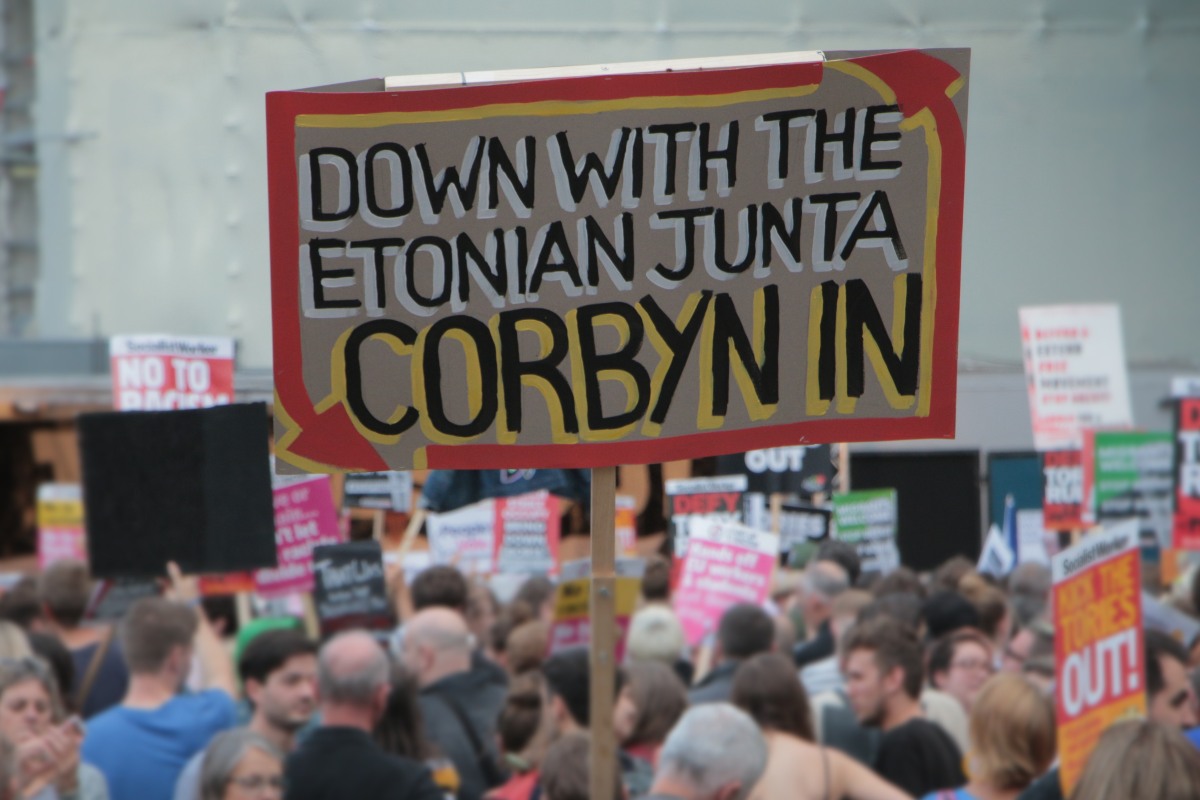 The campaign for a socialist Labour government begins today. We need to sweep away the Tories and transform society in the interests of the working class / Image: Socialist Appeal

Everything will be to play for. Most people are sick-and-tired of watching MPs debate, intrigue, and manoeuvre. Out on the streets, addressing large rallies of workers and youth, however, Corbyn will be in his element.

If Labour combines such a campaign with a bold manifesto, based on class-based issues, as in the 2017 snap election, then it can – and will – win. This is the only way forward.

This is what we must be looking towards. We must not be distracted by anything else. All of the frenzy and fluster over this-or-that tactical minutiae will soon be forgotten when the masses begin to move.

The most important point is this: An election is imminent. The Tories are split and are in disarray. Boris’ rich-boy government is hanging by a thread.

The campaign for a socialist Labour government begins today. We need to sweep away the Tories and transform society in the interests of the working class. Without this, there is no solution to the present crisis – in parliament or anywhere else.

This is the fight we’ve been waiting for. Let’s get out and win it!

Militant protests show the way forward: "Boris out! Corbyn in!"

Last night, on Tuesday 3rd September, thousands gathered in Parliament Square, opposite the Palace of Westminster, to demand a general election now.

This was one of many protests that have taken place across the country in the last week, since Boris Johnson decided to set off a constitutional grenade by announcing the prorogation of Parliament.

The Prime Minister’s shock move has been met with outrage from politicians and the public alike. But whilst parliamentarians have been panicking inside the House of Commons, activists have been taking to the streets. 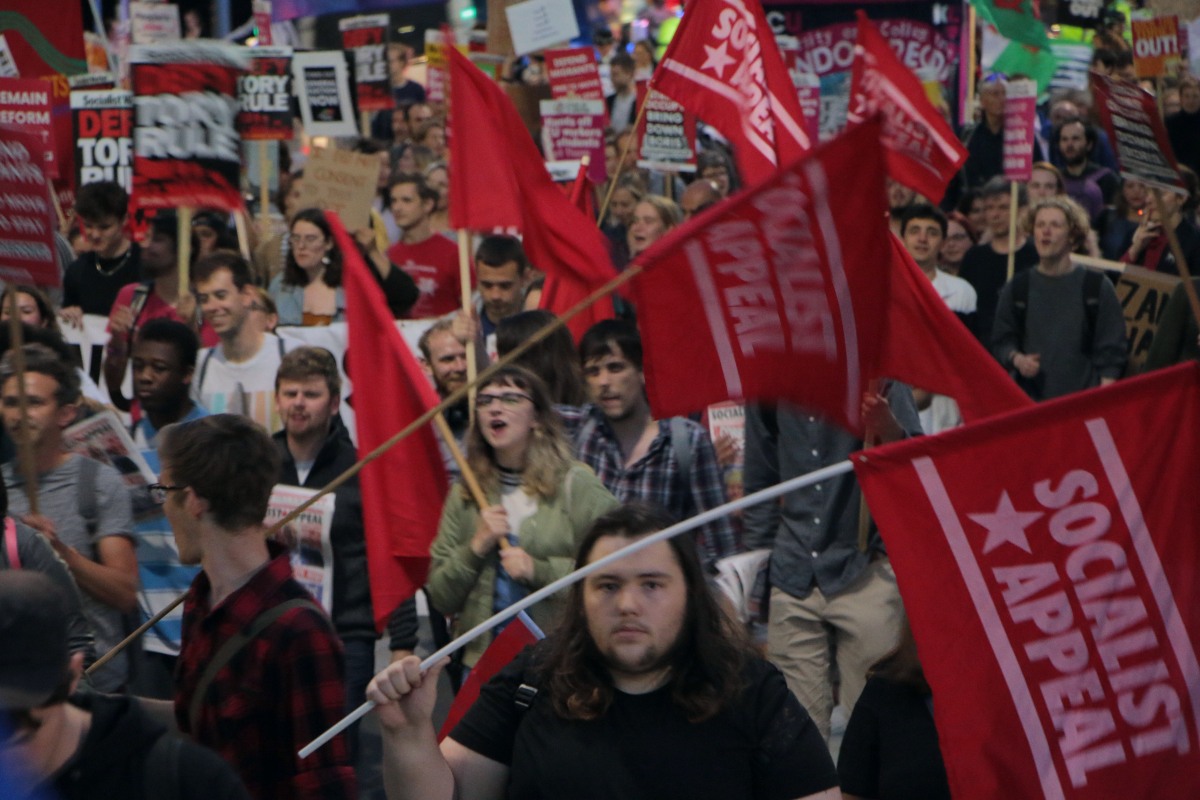 Many protesters on last night's demonstration called for an immediate general election, and there was a widespread desire to boot out Boris and fight for a Corbyn Labour government / Image: Socialist Appeal

Unlike some of the other recent protests, however, Tuesday’s demonstration in London was particularly militant. This was thanks to the prominent political and organisation role played by the labour movement; the focus on class issues; and the primary demands to force a general election, kick out the Tories, and end austerity.

This is in contrast to many of the other protests over the last week, which have tended to be organised and dominated by more liberal types, with an emphasis on stopping Brexit and ‘defending democracy’, rather than stopping Boris and bringing down the government.

As a result, the crowd last night was much younger and more radical. Many called for an immediate general election, and there was a widespread desire to boot out Boris and fight for a Corbyn Labour government.

A number of speakers addressed the rally, including leading trade unionists, Labour MPs, and prominent left-wing activists. Many of these correctly called for mass working-class action and for a socialist Labour government.

Richard Burgon, for example, Labour MP for Leeds East, called for mobilisation of the labour movement, not just to defend democratic rights, but against the “rotten status quo”. This was met with enthusiastic cheers.

Towards the end of the rally, militant young activists led a spontaneous march past the Houses of Parliament. Traffic was brought to a standstill and protesters occupied the streets, even sitting down on Westminster Bridge and refusing to move.

All the while, people were chanting and shouting slogans: “If you shut down the Parliament, we’ll shut down your streets!” This unplanned action highlights the anger and militant atmosphere that exists everywhere, especially amongst the youth.

Socialist Appeal supporters were present throughout the demo, forming a loud and visible bloc as the march stormed through the streets of Westminster and Whitehall. Our slogans were well received – in particular demands for “Boris out! Corbyn in!” 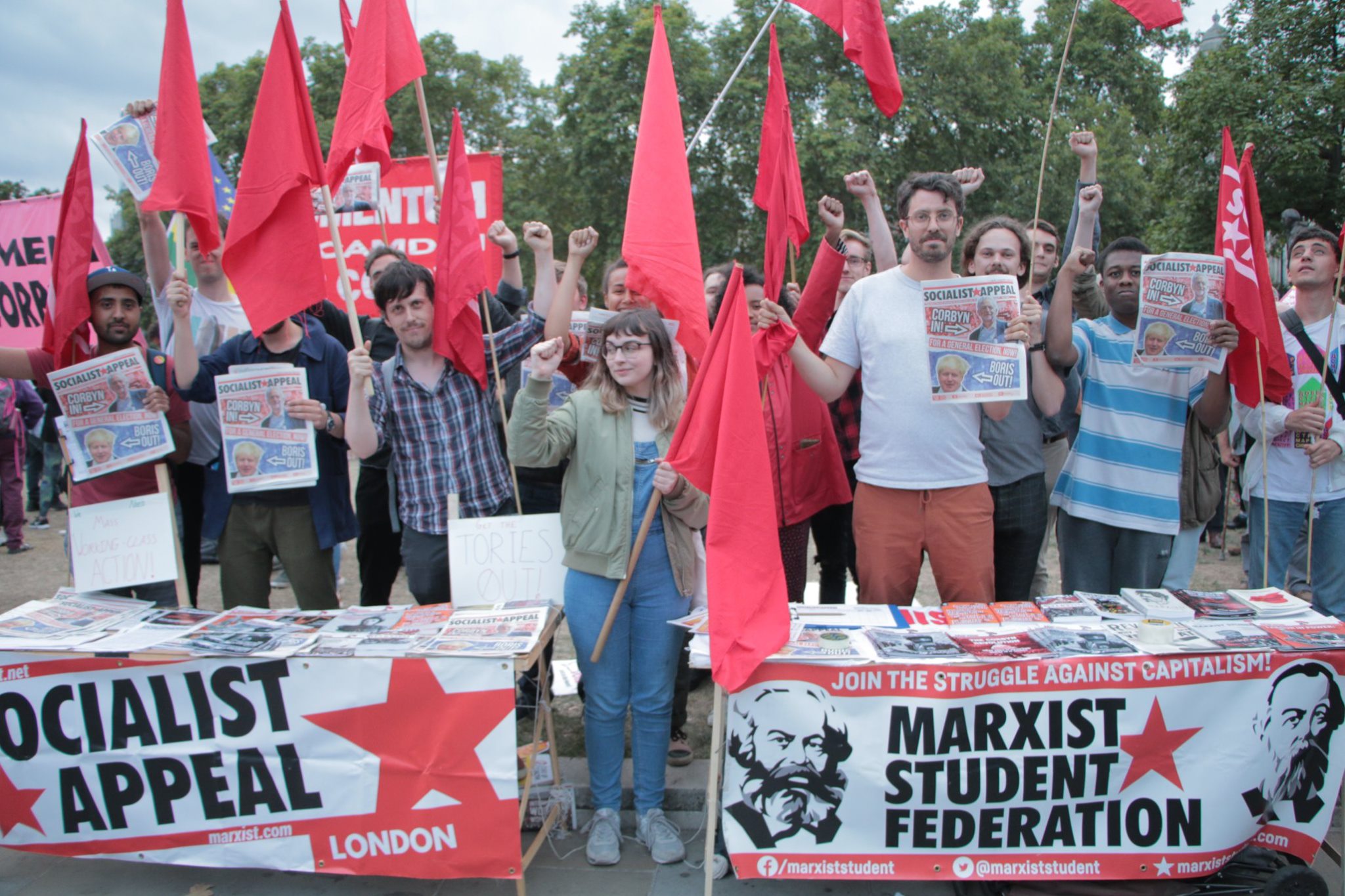 Workers and youth want a real change in society – one that cannot be achieved through parliamentary machinations, but on the streets. Boris Out! Corbyn In! / Image: Socialist Appeal

Marchers also sang, “Oh, Jeremy Corbyn,” demonstrating the desire and need for a Corbyn Labour government to provide a way out of the parliamentary chaos.

This demonstration shows that workers and youth want a real change in society – one that cannot be achieved through parliamentary machinations, but on the streets.

But, above all, it shows the power and potential of mass action based on the organised working class and the youth.

If Jeremy Corbyn and the labour movement were to put themselves at the head of a national campaign to kick out the Tories – on the basis of bold socialist policies – then Boris’ fragile government would not last one more day.