This week has seen thousands of women council workers taking strike action in Glasgow in an ongoing dispute over pay equality. The dispute dates back to equal pay claims from 2006, when Glasgow City Council introduced a Workforce Pay and Benefits Review System, which aimed to tackle the gender pay gap. However, under the scheme, low-paid jobs tending to be occupied by women – such as cleaning, catering and care – are being paid significantly less than jobs such as refuse collection, which are male dominated.

[Read the original on Revolution]

Following years of legal action, including a ruling that the council’s exclusion of women from bonuses had been discriminatory, Glasgow city council announced in early 2018 that it would seek to end the dispute by negotiating a settlement for 12,000 current and former workers.

Despite ten months of meetings, however, a resolution never came. The council has said it plans to put forward a deal by the end of the year, and has also highlighted the financial difficulties it will face in reaching settlement, with estimates placing the cost in the region of £500m to £1bn.

The women affected – who are working predominantly in care, cleaning and learning assistant roles for the council – voted overwhelmingly in favour of strike action to show the council the true worth of the jobs they do, and to demand a fair settlement. 99 percent of women represented by Unison and 98 percent by GMB voted in favour of action.

The working class has been paying for a capitalist crisis that was not of our making for the last decade / Image: fair use

8,000 women workers are officially involved in the dispute for equal pay – many of them cleaners, carers and teaching assistants. But at the Scottish TUC march on 23 October, it was estimated that 11,000 people were in attendance, making it one of the city’s largest union rallies in years.

There was a jubilant atmosphere filling George Square, as untold thousands continued to stream in from Glasgow Green, all under the Unison and GMB union banners. Placards demanded an end to the 12-year dispute, which has seen female council workers systematically discriminated against in their pay, with possibly billions owed by Glasgow City Council.

Trade unionists spoke about the shamefully slow progress of negotiations and the neglect that the women workers feel is shown towards their vital roles. Workers with two, sometimes three jobs spoke from the platform about their struggle to make ends meet. These are school cleaners, carers for the elderly and disabled, and school teaching assistants: roles that are largely invisible to us but absolutely essential for the functioning of public services.

This strike exposes fundamental issues about the nature of women’s oppression under capitalism. The struggle underlines the continuing gender pay gap, as well as the overall exploitation and mistreatment of low-paid workers under capitalism. 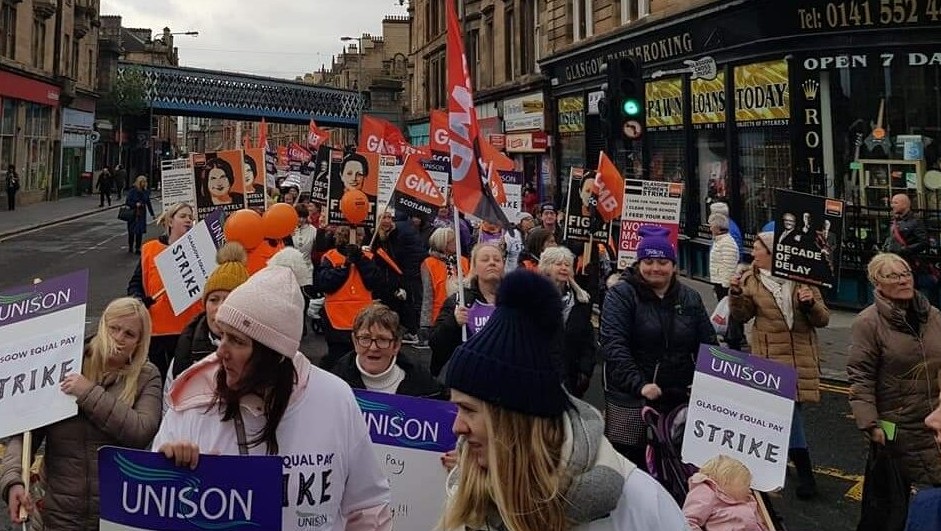 This strike exposes fundamental issues about the nature of women’s oppression under capitalism / Image: fair use

The pay gap between men and women is still an enormous gulf, improving only at a snail’s pace, if at all. The work of caring, cleaning and teaching is still dominated by women workers – poorly paid despite their importance to society. And even when many of these women go home after a hard day’s work, they are burdened with unpaid domestic toil.

Women have long been seen as an easy target; less likely than men to fight low pay and poor conditions. And in this epoch of austerity, the conditions and pay of workers across all sectors – and particularly those in jobs deemed to be low skilled – have come under attack. The women workers striking against the council are an important example of militancy from one of the most exploited groups in society.

The enormous mandate given by the strike ballot shows that workers are fed up. Going on strike and putting your livelihood at stake is never easy. But the immediate effect of taking action has been to give confidence to workers across the city.

Refuse collectors stunned the council by refusing to go to work during the strike days, in solidarity with their fellow council workers. Speaking to a striking GMB member, she told us that the bin men were not included in the dispute because the union leaders thought they would vote against strike action to protect their relatively higher pay. Instead, the male workers were gripped by strike fever too!

On Wednesday, we observed hired scabs – some apparently from Edinburgh – collecting rubbish around the city. For a second day, the refuse workers would not cross pickets and took unofficial strike action in solidarity, forcing the council to back down from punitive action.

Sadly, the strike momentum did not push EIS (the Scottish teachers’ union) members to take action.

EIS, the main teaching union in Scotland, has demanded a 10 percent pay rise in response to a 20 percent cut in real wages since the financial crash in 2008. The Scottish government has responded with an offer of a 3 percent increase. As well as a substantial real wage cut, teachers in Scotland have also faced increased hours and stress as a result of cuts.

The union is currently running a consultative ballot on whether or not to accept the 3 percent deal. Following this, if (as expected) the deal is rejected, it is likely the EIS will ballot for industrial action, unless a better deal is made.

Despite also being involved in a dispute over pay, however, we observed teachers crossing pickets to go into closed schools. The picketers were disappointed to see this, instinctively knowing that workers need to stand together in solidarity to win.

The strike raises the broader political issues surrounding austerity in Scotland. While Labour and the SNP see fit to attack each other over the strike – with the dispute originating under a Labour council and the strike happening under an SNP one – the workers have no time for it.

They want fair and decent pay. They want to have a secure livelihood. They want an end to austerity. One picketer we spoke to said she just wanted to be able to look her daughter in the eye and say she fought for gender equality and a better future. 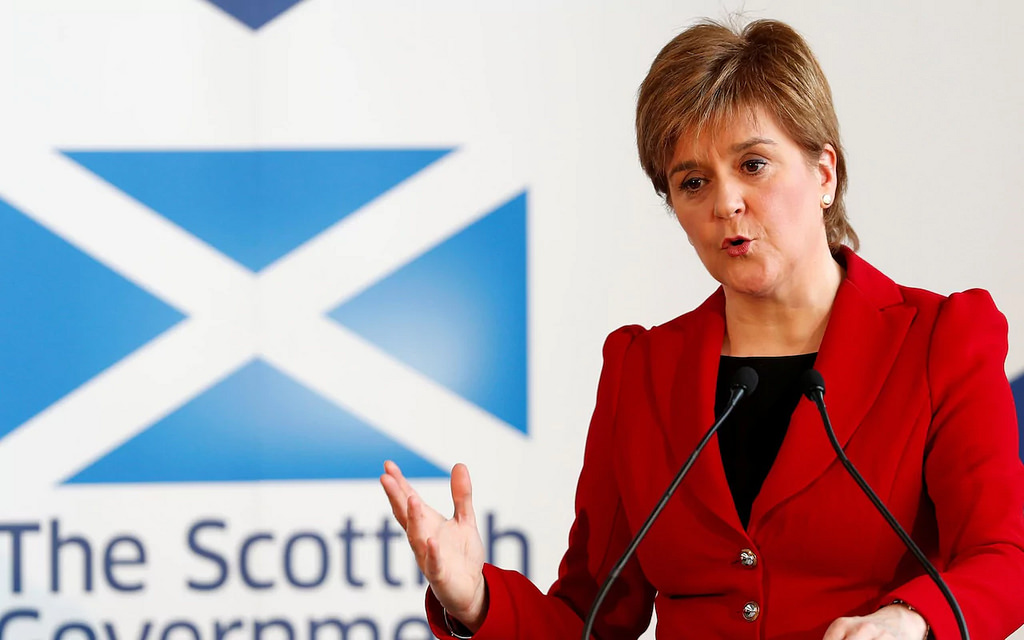 While Labour and the SNP see fit to attack each other over the strike, the workers are uniting / Image: Tiocfaidh

It is likely that the council will continue to try to pass the buck and kick the can down the road, offering legal settlements to avoid paying what is owed.

Glasgow council and the Scottish government will claim that they are in no position to increase teachers’ pay by 10 percent or pay out settlements to underpaid women workers. They will claim that in order to do so they would need to reduce services; that there is no money; that austerity has bound their hands.

We say that the working class has been paying for a capitalist crisis that was not of our making for the last decade. Given the vast wealth that exists in private hands within society, there is no need for services to be cut or for workers to be paid poverty wages.

There is another way

But justice will not be served by following the law. “It is better to break the law than break the poor” was the slogan used by the Militant Liverpool Council in 1983, when they set an illegal budget and refused to implement the Tory government’s austerity and attacks.

If Glasgow were to do this – backed by a mass movement that spread across Scotland and the UK, demanding support from the anti-austerity majority in Holyrood and from Corbyn’s Labour – austerity could be defeated and the Tories overthrown in a matter of days. 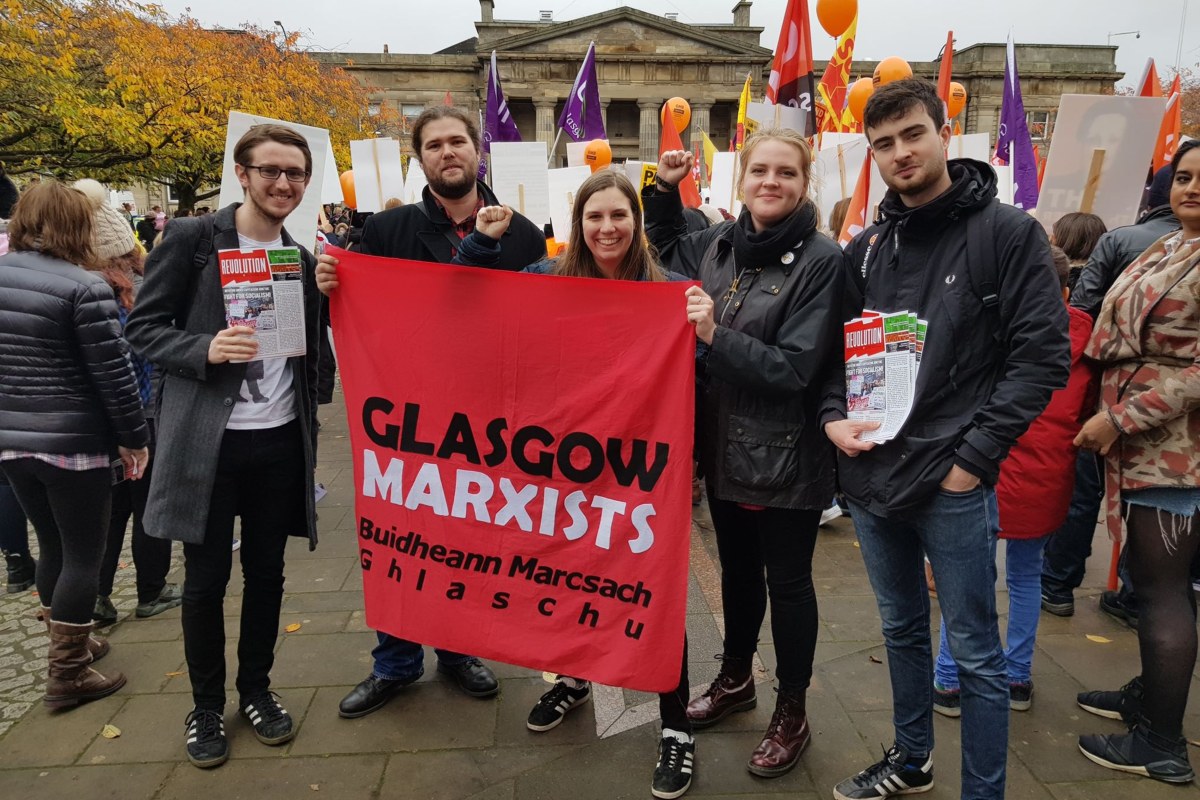 With socialism as its rallying cry, the workers could strike a blow against the exploitation and sexist discrimination that the capitalist system relies on / Image: Revolution

With socialism as its rallying cry, such a mass movement could strike a blow against the exploitation and sexist discrimination that the capitalist system relies on.

And with bold socialist policies, the private wealth of the big corporations could be expropriated, bringing it into the hands of the many, so that we can all have access to decent pay, services and standards of living.

Put simply, whilst under capitalism austerity may be an inevitability, with decisive and radical change there is another way.

As always, strikes show the nascent power that workers have to revolutionise society. All it takes is a steeled, revolutionary determination to fight to the end.