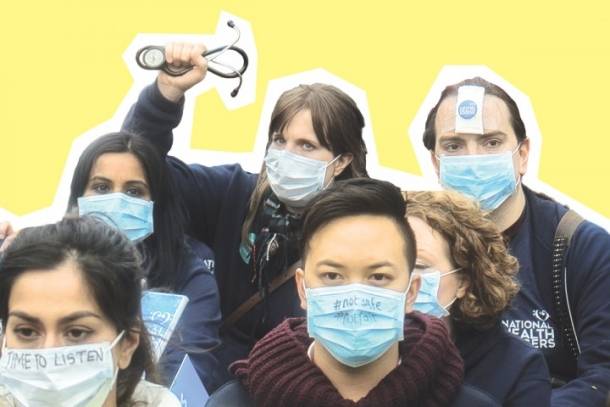 In response to the coronavirus pandemic, many governments are nationalising key industries and services. British Prime Minister Boris Johnson, however, has relied solely on the market. Profit is standing in the way of an effective response to this crisis.

As the coronavirus sweeps the globe, the Irish government has introduced measures to expropriate buildings to set up emergency hospitals, the Spanish government has given itself powers to requisition private health facilities, and France has promised to nationalise large companies “if necessary”. In a word, these governments have admitted the utter bankruptcy of the market in dealing with the crisis.

In Britain however, the shortsighted Boris Johnson government has wedded itself entirely to market measures. The result will be catastrophic for millions of working class families.

The moment has long passed when the government should have been trying to slow the spread of this disease by closing down all non-essential production and introducing social distancing. Boris Johnson however has taken a murderously complacent attitude as the disease spreads exponentially. The lack of response - from the government or bosses - is leading to a growing mood of anger among workers who are demanding to be sent home.

Non-essential production must be shut down now! The question is: who decides what is “non-essential”? The answer is clear: only the workers can decide. To the capitalists the only thing that is “essential” is that they keep making profits. In Italy we see the result of this. The big manufacturers and car companies have pressured the government to leave their industries open. It is “essential” that they be allowed to continue to make profits it seems.

Clearly healthcare, food distribution and certain other industries cannot simply shut down. In genuinelyessential industries, adjustments must be introduced immediatelyto minimise social contact. Workplaces must be reorganised to make them safer and more hygenic. This comes with overheads that the bosses will plead they cannot afford. It is not for the bosses to decide whose lives they can and cannot “afford” to save.

Richard Branson has recently forced thousands of staff to take eight weeks unpaid leave to contain the virus. But there’s no question that he could easily afford to continue paying their wages out of his personal wealth and still be a billionaire! If the bosses claim they cannot afford measures to keep workers safe our answer is: open the books! Let the workers decide for themselves what we can and cannot “afford”. They will find that the money isthere, it is just being hoarded by the rich.

Gambling with our lives

In the past decade, austerity has meant that the number of over-65s in work has doubled, rising to 1.26 million. Austerity has forced people to work longer as they find themselves unable to afford retirement. These workers are now in grave danger. They, and those with chronic conditions that put them at risk, must be sent home immediately.

Why is this not being done? Again, the answer is: profit! Control of staffing must be put under the control of workers inallworkplaces. It is the workers whose lives are being risked by continuing to work. It must be they who decide who should and should not be allowed to work. 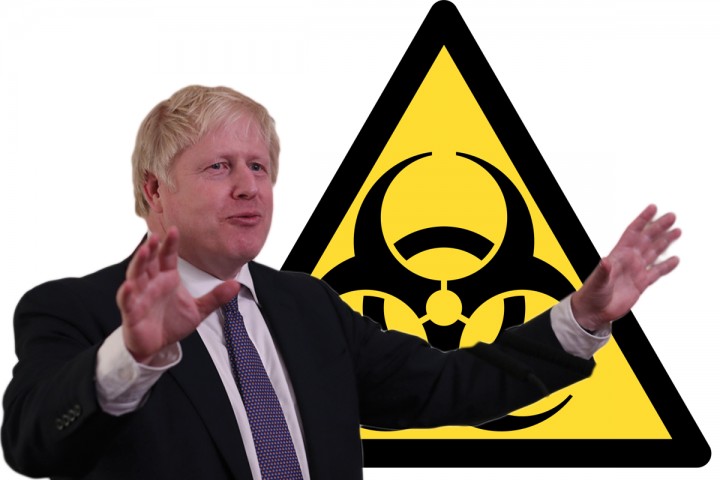 The coronavirus has torn the mask from Boris and his billionaire cronies / Image: Socialist Appeal

Across Britain and in a thousand ways workers are putting forward demands, for the sake of themselves and their loved ones, which amount to the demand for workers’ control. The trade union and Labour leaders now have a duty to take up this call, to generalise it, and to give it a clear expression.

Anyone can now see that exceptional measures must now be taken to stamp out this virus. To avoid a global catastrophe will require the complete abolition of the market. A decade of austerity and privatisation has left the NHS with a dearth of hospital beds and Intensive Care Units, properly equipped with respirators.

Capitalist governments in Ireland and Spain have already shown that measures can be taken against private property. What is our government doing? The GMB has rightly demanded that the government requisition private hospital beds to cope with the coming tsunami that will batter the healthcare system. Instead the government has “rented” an extra 8,000 hospital beds from private health firms… at the cost of £2,400,000 per day!

This is a public health emergency.

Not a business opportunity for shoddy private healthcare chums to profiteer from distress.

It’s time to take back these beds for the NHS. Rent-free.#COVIDー19 #Marr #Ridgehttps://t.co/92WOOpary5

This amounts to a national scandal. Instead of pouring money into private healthcare, the entire private healthcare system, as well as the pharmaceutical industry, must be nationalisedwithout compensationand put at the service of the struggle against this virus. But even such a measure, which we would welcome, would not be enough at this stage. Thousands of respirators must now be built to prevent tens of thousands of deaths.

Do we have the means to achieve such a feat? If what is meant is, “Are there enough factories currently tooled to be able to produce such a large number of machines?” then the answer is clearly, “No.” But if the ingenuity of workers was harnessed in existing factories (say, weapons factories) to immediately retool them to create these devices, then such a feat could easily be achieved.

Are the Tories expropriating factories and planning the production of sufficient medical equipment? Of course not! Instead we have the spectacle of Tory Health minister, Nadine Dorries, tweeting to appeal for businesses to call her hotline if anyone has the means to build respirators! In a conference call with CEOs to discuss this question, Boris Johnson sickeningly joked that this appeal to “market forces” could be termed “Operation Last Gasp”.

The fact is though that because they wouldn’t dare to violate the property rights of their billionaire friends there is nothing they can do to guarantee these ventilators. The only way on Earth these rich parasites will agree to undertake the expense of retooling factories will be if the government promises them fat profits. The coronavirus has torn the mask from Boris and his billionaire cronies: they are coining the blood of the working class.

But if we dispensed with capitalism’s cardinal rule that profit is more sacred than life, then solving this crisis would be wholly possible. Under a democratic economic plan, temporarily shutting down production would present no great difficulty. The reason is simple: there would be no profit motive, only the motive of saving human lives and providing a comfortable existence for humanity.