Britain
Share
Tweet
The New Labour government is on the rocks. The wreckage of Blairism, under the leadership of Gordon Brown, was dealt a further crushing blow at the Crewe and Nantwich by-election. A 7,000 Labour majority was turned into a 7,000 Tory majority in a swing of 17.6%. It was the Tories' first by-election gain in 30 years.

The New Labour government is on the rocks. The wreckage of Blairism, under the leadership of Gordon Brown, was dealt a further crushing blow at the Crewe and Nantwich by-election. A 7,000 Labour majority was turned into a 7,000 Tory majority in a swing of 17.6%. It was the Tories' first by-election gain in 30 years. 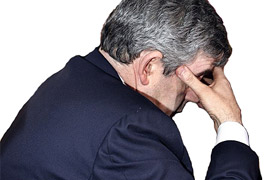 Such a result if repeated at a last general election would mean a Conservative landslide. They would have an overall majority of 328, double Blair’s majority of 1997. Labour would be ousted in all but 89 core constituencies, resembling Labour’s historic defeat of 1931, following the betrayal of Ramsay MacDonald.

For New Labour, the Crewe result is nothing short of an electoral meltdown, coming at the end of the best month for the Conservatives since 1992. It follows Labour’s disaster of the local elections, where the party was forced into third place, a full 20 points behind the Tories, and the victory over Labour for Boris the Barbarian as London mayor. One agonizing defeat is spilling over to the next. New Labour has been unpopular before, but not like this. This result has allowed the Tories to rise from the political dead. They can now smell victory as the New Labour edifice comes crashing down. Brown seems set to suffer Callaghan's fate - to be the unelected prime minister, who serves out the closing days of Labour before a crushing defeat.

The plight of New Labour is reflected in the faces of the party leaders. Brown portrays a lonely grey-faced defensive figure, shattered by his declining fortunes. His attempts to artificially smile, urged on him by his advisers, betray his shallowness. He is a man that is clearly out of touch despite his protests to the contrary. This contrasted to the confident image of Cameron, standing on the street in Crewe and Nantwich, glowing with success, celebrating the Tory’s first by-election victory for more than a quarter of a century.

There is utter despair in Labour’s ranks not seen for decades. Those Labour MPs who were nervous are now petrified. Crewe and Nantwich was 165th on the Tories' target list. It was a rock solid Labour seat. As a result, many in ‘safe’ seats are shaking in their boots, their confidence gone. There is now deep demoralisation throughout the Parliamentary party, amongst the very people who nine month’s ago voted for Brown’s coronation as a means of distancing themselves from the disastrous Tony Blair. Today, after nine months, Gordon Brown in more unpopular than Blair, Thatcher or even John Major!

Despite all the hype at the time, Brown is no different in political terms than Blair. He offers a continuation of Blairism, a continuation of pro-capitalist policies little different from the Tories. All the illusions that Brown would offer something different have completely evaporated. He continues to preach the virtues of the capitalist market and privatization. Profitable postal services are handed out to big business, while post offices are closed down as ‘uneconomic’. Tens of thousands of civil servants’ jobs are being slashed, while the welfare state is opened up to private charities, a throw-back to Victorian times. Workers’ pay in held down to below inflation while boardroom directors are raking in millions. This has resulted in massive disillusionment amongst traditional Labour voters, who stayed at home in Crewe and elsewhere. It is no accident that from 1997 and 2005, Labour lost around five million votes! New Labour is in terminal decline.

Now the knives are being sharpened in the parliamentary party. “The mood is awful. The tank is empty", said one. There is talk of a leadership challenge. "People are not far away from thinking that we cannot win under Gordon Brown," a senior Labour figure said. "We wish it was different from what it is. But it is hard to avoid looking at the facts."

With the conviction of a football board talking about the future of its manager, Harman admitted that there were "discordant voices" within the party, but she dismissed suggestions of a move against Brown: "I don't think that will happen.” Miliband also spoke up for the prime minister. "We have got the right leader, we elected the right leader unopposed last year, and we have got the right leader to take us into the general election," he said, which sounded like the kiss of death.

While the clique around Brown attempts to hold the line with excuses for the debacle such as ‘normal’ mid-term difficulties, the world financial situation and the squeeze of rising prices, others are crying the house is already ablaze and it is a delusion to hope that Brown will turn things around. After all he gave away £2.7bn in tax cuts in an emergency mini-budget designed to resolve the 10p tax crisis, but that failed to halt the defeat. Disgustingly, in Crewe they even tried to out Tory the Tories by accusing them of being soft on "foreigners".

But the meltdown for the party is not simply due to Brown, but is the result of a decade of pro-capitalist policy. Miliband, Balls, Straw, Harman, etc, would all end up the same. They are all tied to the same policy of working within the capitalist system, no different from the Tories. They rejected socialist policies, together with the entire tradition of the Labour movement. With Blair they tried to turn Labour into a capitalist party that would represent big business better than the Tories. However, they failed to break the trade union links, the historical bond between the Labour Party and the organized working class. In reality, they represent a group of Tory carpet-baggers determined to tie the Labour Party to the interests of capitalism. This is the essence of Blairism which Brown and the others slavishly followed.

To Brown’s chagrin, Blair handed him a poisoned chalice. Blair got out while the going was good, leaving Brown to deal with the mess.

The growing discontent, reflected in the growing number of strikes (even affecting the Police Federation), indicate a new situation.

Brown is incapable to holding the line. The bourgeois have drawn the conclusion that Labour has exhausted its usefulness for them. As in the past, they used Labour and now intend to throw it aside, like a used rag.

They have returned to their traditional ally, the Tory party to secure their ends. Everything will now be done to discredit Labour and promote the Tories.

In their endeavours, the Blair/Brown gang had the support of the right-wing trade union leaders, who also acted as a prop for capitalism within the workers’ movement. They voted through every change in the party since the early 1980s. They jettisoned left policies. They abolished party democracy and drastically reduced the powers of party conference to the side-show it is today. They reduced the influence of the unions over the party, helping the Blairites to consolidate their grip over the party. They were willing accomplices and are also responsible for this current mess.

Unfortunately, many of the trade union ‘lefts’, such as Simpson and Prentice, have continued with this disastrous policy. They refused to challenge Brown, stating he was more left than Blair! They refused to back John McDonnell for party leader. Now we are left with the consequences. It is up to the rank and file of the unions to put a stop to this capitulation.

All the chatter about creating ‘alternatives’ outside of the party is simply an empty gesture. All the 57 Heinz varieties of groupings on the fringes of the Labour movement who have argued this line have been completely shattered. Their efforts have been a complete waste of time.

For the trade unions, this is no time to ‘contract out’ of the party, which leads nowhere, but to get stuck into the fight where it counts. The trade unions should use their strength to clear out the New Labour leadership and return the party to its traditional socialist stance. As long as the party remains on the basis of capitalism it will never be able to resolve the problems facing the working class. On the contrary, as we are experiencing today, it is being forced to carry out policies in the interests of capitalism. On this road lie only disaster and the return of a new vicious Tory government.