Britain
Share
Tweet
There is a burning anger in the workplaces against the bosses’ attacks. Pressure is mounting for the trade union leaders to act in defence of jobs and wages. Internationally, workers have taken to the streets, such as in the recent demonstration of 200,000 workers in Dublin. The British workers will inevitably move in the same direction at some stage.

As the capitalist crisis deepens, more and more workers are coming under attack. Vodafone has just announced huge lay-offs. There are plans to axe 1,000 jobs on the railways. The sacking of 850 agency workers at the Cowley car plant in Oxford is the latest in a string of redundancies. They received no redundancy pay, no holiday pay and no sickness pay. All they were offered was their P45s and a week’s wages. Wage freezes have also become common in the last period. Short-time working has spread with Toyota closing its factory for four weeks.

All this is being imposed on the workers, as the trade union leadership is offering no way out. What is questionable about the Toyota deal is how democratic that decision was as there are no shop floor meetings in the plant or any genuine Trade Union democracy. The only option the workers were given was: either accept cuts in hours and wages or lose your job altogether. In such circumstances what is required is for the trade union and Labour leaders to offer a programme that can protect jobs and wages, and to be willing to take up militant action. 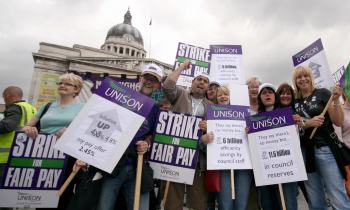 The trade union leaderhips are offering now way out of the crisis for the workers of Britain. Photo by Bob Watt.

However, while in some industries the trade union leaders have managed to get such deals accepted, in other sectors workers have reacted angrily with militant strike action, such as the Lindsey Total oil refinery workers. Faced with unemployment and a threat to their terms and conditions, construction workers at Lindsey downed tools and walked off the site. They were met with solidarity action from 22 sites up and down the country, from power stations to refineries.

In any other period since the anti-Trade Union laws have been in place, these would have been used against workers “breaking the law”. Instead the courts were not used, but concessions were made. That is because the bosses correctly understood that to use the courts would have enraged the workers even more and possibly led to more disputes breaking out.

Despite the media hype about ‘British jobs for British workers’, this was a complete lie. It was an attempt to split the workers, which did not succeed. The strike was about the protection of national terms and conditions, which the bosses were attempting to undermine through contract labour.

The final deal reached does not mark the end of the dispute in an industry riddled with casualisation. Already mass picketing has occurred outside the Staythorpe and Isle of Grain power stations as the campaign is stepped up to secure the national agreements.

There is a burning anger in the workplaces against the bosses’ attacks. Even members of the Prison Officers’ Association have voted to reject management reorganisation plans including pay, and look set to engage in industrial action. The scenes at the BMW plant at Cowley were another graphic illustration of the real mood that is developing. When the union convener announced the 850 sackings, he was practically lynched. Workers were jumping up and demanding that the union should act. “What the hell is the union for?” they shouted.

Pressure is mounting for the trade union leaders to act in defence of jobs and wages. In September local authority workers were prepared to take up militant strike action, but it was the leadership of Unison that pushed for arbitration after allowing steam to be let off with one day strikes. 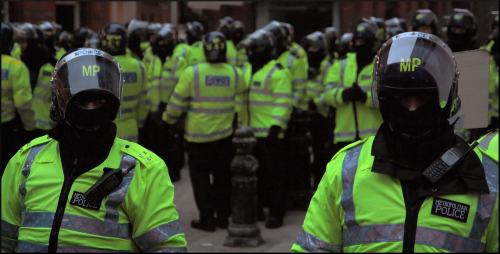 The police are preparing to face masses of workers, whose anger has been unleashed by the economic crisis. Photo by Rich Lewis.

What happened recently at the FIAT Tractor plant in Basildon is another example of this. The bosses have imposed a wage freeze. The workforce was balloted through the official trade union procedure, in a postal ballot where 90% participated and 75% voted for strike action. Unfortunately the convenor and shop stewards committee are prevaricating on the question.

Here we have a clear example of a case where the mood among the mass of workers has leapfrogged over that of those who are supposed to lead. If over a period of time the trade union leaders fail to take up these burning issues, inevitably at some stage workers will follow the example given by the Lindsey construction workers and take unofficial action. Where structures of shop stewards’ networking are already in place, such as in the construction industry, this will emerge more easily.

All this indicates that although the rapid onset of the recession may have led to a temporary stunning and disorientation of some sections of the working class, workers will soon begin to react to the attacks by the bosses, as has been shown in the Construction sector (the first to be hit and the first to fight back).

The fear of what is to come was revealed recently in a police report, which said that as a result of the economic crisis and the anger it creates, we could be facing a “summer of rage”. The same report indicates that we could see riots like those that erupted in 1981 and scenes similar to those during the Miners’ Strike of 1984-85. That is the real prospect before us.

Already, internationally, workers have taken to the streets; not only in France, but more recently a demonstration of 200,000 workers took place in Dublin. The British workers will inevitably move in the same direction at some stage. Big class battles are being prepared in Britain and elsewhere. In these struggles workers will come to the conclusion that what is required is a renewal of the trade union leadership to bring it into line with the mood of the rank and file. And in the long run they will draw the conclusion that only through the elimination of capitalism can their problems be resolved. The ideas of socialism and Marxism will find a ready audience under these conditions.