Britain
Share
Tweet
The festive season in Britain got off to a grim start with the discovery of two pensioners who died weeks after their gas supply was cut off because of an unpaid bill of £140. These events happened, not in 1840 but in our own times. The Office of National Statistics predicts that 2,500 people will die of cold this week. The cause of these deaths is usually attributed to things like influenza, heart attacks, pneumonia and the like. But the real cause in most cases is poverty and neglect.

Pensioners found dead after gas was cut off over £140 bill 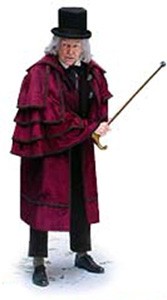 Every Xmas the television in Britain puts on old films by Charles Dickens, usually things like A Christmas Carol. This depicts a world where heartless employers force people to work on Christmas Day and poor people perish of cold and hunger in the Workhouse.

These films always end happily, with repentant capitalists cheerfully giving away turkeys and Xmas puddings to the poor. People are left with a warm feeling that everything is for the best in the best of all capitalist worlds and that, after all, these things happened a long time ago. But today’s news shows that the bad old days are still very much with us.

The festive season in Britain got off to a grim start with the revelations in the press about two pensioners who died weeks after their gas supply was cut off because of an unpaid bill of £140. These events happened, not in 1840 but in the year of our Lord 2003.

George Bates, 89, and his wife Gertrude, 86, were found on 18 October in the living room of the house they had lived in for 63 years after a neighbour called the police. Mr Bates, a retired postman, had died of hypothermia in his armchair and Mrs Bates was lying on the floor having died of a heart attack.

Mr and Mrs Bates were discovered 13 weeks after British Gas disconnected their cooking and heating supplies because they failed to respond to repeated requests for payment. Neighbours said that the elderly couple were good humoured and active. Mr Bates was known as an immaculately dressed pensioner who would entertain staff with jokes and coin tricks at his local convenience store.

Jagdish Patel, 50, the owner of the couple's local post office and grocery shop, said that Mr Bates was meticulous about money. "If he was ever short by a penny or two, he would refuse to buy it on account. He would walk home to fetch the extra money rather than go without paying the full bill. This should have not happened to this wonderful couple," he said.

British Gas told Westminster coroner's court that the company was “prevented from informing social services” about the disconnection because of the Data Protection Act, which prohibits the disclosure of such information without consent.

This case was still more tragic because, as it happens, the couple had enough money to pay the bill. British Gas said that a representative had spoken to Mrs Bates on her doorstep on 9 June about the unpaid bill and she had given no sign of being unable to cope or understand. The bill remained unpaid and the gas was then cut off.

These deaths were therefore the result of bureaucratic mismanagement. But in many other cases, old age pensioners, living on a pittance, must decide whether to spend their meagre incomes on food or heating bills, which in Britain’s inclement winter weather, can be extremely expensive.

While the case was being heard, the Faculty of Public Health issued a warning that 2,500 elderly people were expected to die in the week before Christmas, because of the cold. Poor housing, inadequate heating and "fuel poverty" - defined as any household which has to spend more than 10 per cent of its income to keep warm - were the main causes of the excess winter deaths, the faculty said.

The cause of these deaths is usually attributed to things like influenza, heart attacks, pneumonia and the like. It is put down to weather conditions and the level of flu in the community. But the real cause in most cases is poverty and neglect. Professor Sian Griffiths, president of the Faculty of Public Health, said that too many people were dying of the cold in Britain "because we haven't taken the problem seriously".

She said: "The UK remains one of the worst countries in the world at coping with unseasonal low temperatures. All of us must be vigilant and look out for family, friends and neighbours who may be suffering. Often fatal illnesses develop two or three days after a cold snap has finished."

The Meteorological Office said that an extra 8,000 deaths were expected for very one degree Celsius the temperature falls below the winter average. But it is too easy to blame the British weather and place the responsibility on neighbours and family.

Why should this kind of thing happen in the year 2003 in a supposedly civilized country? If people lived in decent houses, with adequate insulation and central heating, and enough money not to have to worry about expenditure on fuel, these tragedies would not occur, or at least not on such an unacceptably huge scale.

In the Britain of which Tony Blair is so proud, many people – not only the old – are living in slum conditions, in houses that are cold and damp, and have no proper heating. Many others – mainly young unemployed people – live on the streets and sleep under bridges or in shop fronts. Mr. Blair, who, as we all know is a devout Christian, has hit upon a solution for the problem of these vagrants – introduce tougher laws against begging and get the police to move them on.

Indeed, the spirit of Scrooge is alive and well in Tony Blair's Britain.