Britain
Share
Tweet
The protest at Lindsey was a victory for the workers involved. It sends out a clear message to the rest of the workers in Britain: militant action pays and shows what can be achieved in the face of attack. The background to this dispute was a deliberate employers’ offensive to undermine the National Agreement for the Engineering Construction Industry (NAECI) and had nothing whatosever to do with racism or xenophobic tendencies. It was the bourgeois media that consciously tried to portary it as such in order to hide the real content.

With workers everywhere being forced onto the defensive through employers’ attacks on jobs, pay and conditions the victory at Lindsey of the protests and strike action will be seen as a marvellous example to others of what can be achieved in the face of attack. The background to this latest dispute has been a deliberate employers’ offensive over a number of years to undermine the National Agreement for the Engineering Construction Industry (NAECI). The slump in the construction industry since last summer and the onset of the recession only intensified these attacks. 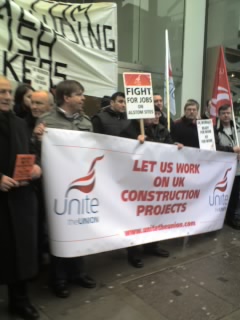 The victory of the protests and strike action at Lindsey will be seen as a marvellous example to others of what can be achieved in the face of attack on jobs and conditions.

The latest victory at Lindsey demonstrates what can be achieved in the face of the recession. Because of the magnificent solidarity shown by workers during the Lindsey dispute the bosses are panicking! Newspaper reports revealed that senior civil servants ordered an emergency ‘Cobra’ meeting to plan the government's response to the strike action. National Grid, the power distributor, has been monitoring the situation very closely in case electricity and gas supplies are interrupted. National Grid may instruct large energy users, such as factories, to close. The Isle of Grain Power Station alone provides 3% of UK electricity! The police and the army have been put on alert! Strenuous efforts have been made by ministers, officials, union ‘leaders’ and conciliators to try to halt the ‘illegal wildcat’ strikes.

Labour leader Gordon Brown has sided with the bosses saying that the outbreak of ‘wildcat’ strikes is "indefensible”.  Every effort is being made to undermine the solidarity of the strikes and protests. Lord Mandelson addressed the House of Lords saying “We should keep our sights set firmly not on the politics of xenophobia but on the economics of this recession.” This was a clear attempt to try to smear the strikers and divert attention from the real issues of the dispute, which were protection of jobs and defense of working conditions. Some on the left have unfortunately fallen for this crude attempt to smear the strike. The BNP have tried to intervene in the dispute hoping to turn it into a nationalistic strike but have been turned away by the workers involved.

The reason for the success of this current dispute is that it is a movement from below controlled by the rank and file. For far too long the trade union leaders have sat on their hands, shying away from challenging the Tory anti-union laws that prevent workers from legally striking in solidarity for fear of union funds being sequestrated. No members want union funds to be confiscated but, what better time is there now to mount a serious challenge? 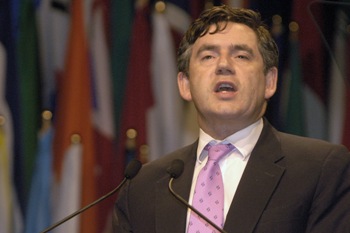 Every effort is being made to discredit the strike and Labour leader Gordon Brown has sided with the bosses. Photo by IMF.

At the time of his election in 2002 Derek Simpson, the General Secretary of Unite Amicus, promised to ‘abolish the anti-union laws’ but has done nothing since to honour his promises! Simpson is now saying "We can't condone unofficial action”. We all remember what happened during the Wembley Stadium dispute in 2004 where workers were left to defend themselves while two Amicus officials attempted to escort crane drivers across the picket line. Thanks to the solidarity of the Dutch crane drivers who refused to cross the picket line, this attempt was thwarted. Only through the efforts of the workers themselves were Multiplex forced to reinstate the sacked workers and prevented from removing the NAECI terms. The lessons from Wembley were clear. Control of disputes must be kept in the hands of the workers.

The recent dispute, from the point of view of the present laws governing trade union activity, was ‘illegal’. There was no ballot, no forewarning, there was mass picketing and solidarity action by other workers. And yet instead of quoting the law, the government and the bosses called in ACAS and tried to patch together some deal in a desperate attempt to get the workers back to work. Had the bosses not offered anything and the law had been used, in the present conditions this would have led to a widening of the struggle. The message to all workers will therefore be very clear: militant action pays!

The action must now be stepped up to make sure that sub-contractors on all the major projects are adhering to the NAECI agreement. The leadership must call a national strike in construction now. The moment should be seized to extend the agreement to all construction sites beyond the major projects as well as launching a campaign to make improvements to the agreement. But at a National meeting of shop stewards called in Manchester on the 9th February no clear lead was given by the union leadership. Instead of calling for support for a national strike all they did was to announce a lobby of parliament on the day that mass protests had been called at Staythorpe and the Isle of Grain power stations. With no clear leadership the workers have again been left to defend for themselves. 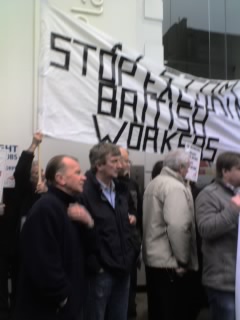 Construction workers are demanding that companies adher to the NAECI agreement.

A change in the union leadership is required. Derek Simpson is up for election in Amicus on the 16th February and is being challenged by Jerry Hicks, who has been supporting the protests from the beginning. He has been at the protests at Staythorpe, where he sustained a fractured leg after police attacked the protesters. Instead of putting the perks and privileges of the official above the interests of the members he will put the interests of the members first. He has pledged to only take the wage of the average skilled member. He is a rank and file candidate who will give the official leadership support that this campaign of strikes and protests need.

Across Europe workers are under attack. The bosses want the working class to pay for the capitalist crisis engulfing the world. We need a militant programme to defend workers. Part of this must be to transform the labour movement into a real weapon of struggle. A new militant leadership needs to be created with leaders who are prepared to sweep away the anti-union laws and challenge the capitalist system. Only socialist policies can offer a way out of the crisis. Only when the banks and big monopolies are taken into public ownership can the economy be planned in the interests of working people. Only then can we guarantee jobs for all and a decent life for the majority of people. Join us in the fight for socialism! Join with Socialist Appeal today!