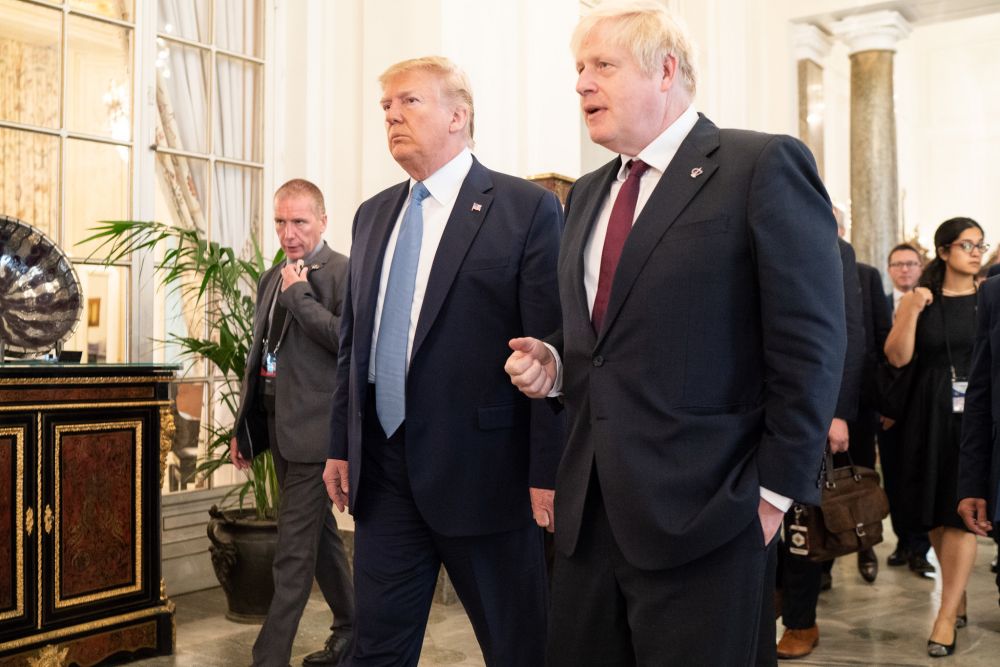 The Tory election victory in December and last week's Brexit Day were meant to be the latest act in a romantic drama. Having taken four years to finalise its divorce with Europe, Britain was expected to elope with its new love: Donald Trump’s USA.

But already the Tory dream of a ‘Global Britain’ is coming up against a very cold and very sobering reality. Britain is a third-rate power in decline; Trump holds all the cards; and at the end of the day, the only ‘great deal’ he’s interested in is one that squeezes as much as he can get out of Britain.

Before the election was even completed, it was already clear that the American dog was not about to be wagged by the British tail. Despite all the promises that the NHS was not for sale, it was revealed by Channel Four’s Dispatches that the government had been in secret negotiations with the Trump administration for some time - and the NHS most certainly would be on the table. American big business wouldn’t be interested in any deal where that wasn’t the case.

Just one month into Boris’ government, sidling up to America has already turned out to be a tough task.

The start of the year brought Boris his first test with the US assassination of General Soleimani, a leading figure of the Iranian regime. Imagine Johnson’s discomfort: he could hardly endorse a move that would do serious damage to the interests of British capital in the region; but he could hardly condemn the actions of Washington, to whose coat tails he clings.

Most stinging of all, the US didn’t even inform Britain in advance. “It is regrettable as one of the US’s closest allies,” stated Jeremy Hunt. “It’s an important aspect that there are no surprises in that relationship.”

How to overcome this “regrettable” neglect? Perhaps, Hunt suggests, by submitting to the increased defence spending that Trump has insisted on. It is no wonder America ignores you when you haven’t been sufficiently attentive to its needs!

But squaring that diplomatic circle is as nothing compared to the gymnastics Johnson’s government is going to have to do as it tries to negotiate two parallel trade deals with two far more powerful and increasingly antagonistic trading partners.

Trump has promised a quick deal that will no less than quadruple trade with Britain. Unlikely as that is, for any deal to be acceptable to Trump, it will have to involve untrammelled access for US corporations to the British market, which would mean tearing up existing regulations. 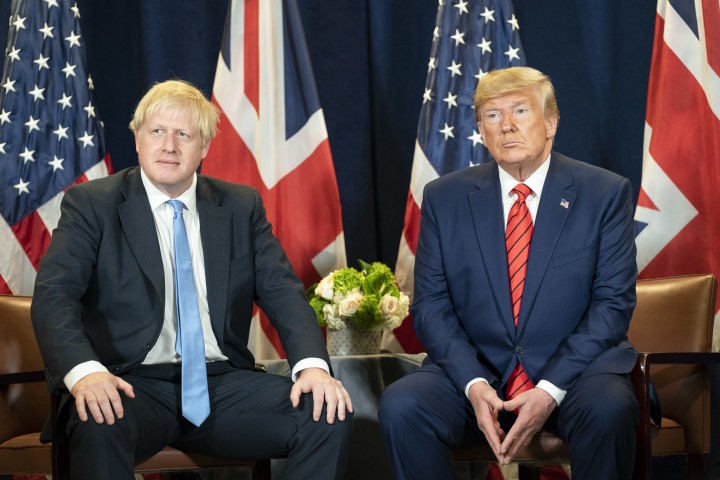 Boris Johnson is trying to balance between two powerful and antagonistic trade partners: Europe and the US / Image: Flickr, The White House

The trouble is, this would mean divergence from EU trading standards, making a deal with the EU more difficult. And lest we forget, the clock is ticking. Britain has less than a year to negotiate and legislate for any deal with the EU.

The only way that can be done is by close alignment to the EU. But Sajid Javid has already ruled this out, promising Britain will become “a rule maker, not a rule taker”.

Furthermore, the whole point of Brexit was to turn back the clock to when “Britannia ruled the waves”. “Not if you want a trade deal,” Brussels replies. Any deal will include access to British fishing waters for EU member states.

It is well known how excruciating having to share the same room with both your ex-partner and your current partner can be. So spare a thought for Tory Chancellor, Sajid Javid, at Davos earlier this month. On the question of trade deals he told the assembled great and the good: “Our first priority is getting an agreement with the EU…We are leaving in nine days but we still have to do the trade agreement.”

Embarrassingly for Javid, US Treasury Secretary, Steven Mnuchin, was sitting right next to him! He couldn’t help but express his disappointment that a deal with the EU was Javid’s “first priority”. “We thought we’d go first,” sighed the American ex-banker.

A few days later, this little tiff escalated, as Javid announced plans for a new digital services tax. Many of the companies affected are tax-dodging American tech giants like Google and Facebook. No prizes, therefore, for guessing how this went down across the pond.

Trade hasn’t been the only sore point. As the telecoms industry prepares to roll out its upgraded 5G network, the Trump administration is putting increasing pressure on Downing Street to cut the Chinese supplier, Huawei, out of the market. To do otherwise, they insist, would mean opening Britain’s networks to the prying of the Chinese state.

That as it may be, American tech firms are selling the same technology at a price that makes British telecom companies wince. Again, Boris was forced to snub his new ally.

Not such a ‘special relationship’

Boris hasn’t had even a minute to bask in the Brexit glow before reality has rudely intruded. Out of Europe, Britain has nowhere to turn but America. Yet the American ruling class don’t view the ‘special relationship’ with quite the same affection as the British ruling class. Johnson’s crisis sums up the hopelessness with which British capitalism has faced up to its sliding power in the world. 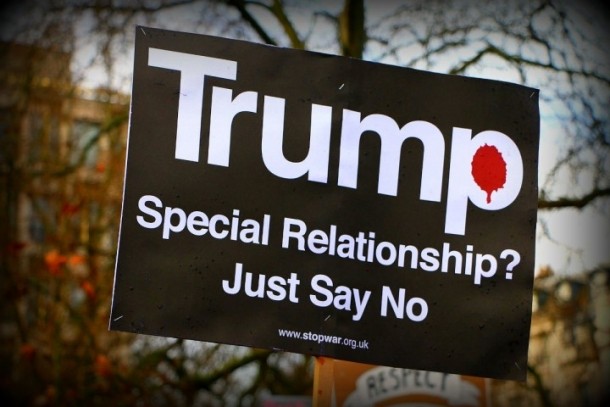 For more than a century, British capitalism has been in decline. This became pronounced after the Second World War, when it was clear that the “Big Three” at the Potsdam Conference were really the ‘Big Two’ plus Britain. It was Winston Churchill who coined the term, ‘The Special Relationship’.

In reality, these proved to be the delusional ravings of a senile and decaying ruling class. The more intelligent and farsighted wing of the capitalist class understood that the US ruling class is far less sentimental about its relationship with Britain, and it was time to accept a secondary place in the world.

In his book, Whatever happened to the Tories?, former Tory MP, Ian Gilmour, commented quite amusingly on this sad spectacle:

“In her obsessive courtship of Washington, Britain often showed a surprising lack of dignity. She flaunted herself as America’s greatest love, suggesting in effect that the two countries were joined together in wedlock. And she went on doing so, even though the United States usually spurned her advances, professing friendship but insisting on keeping the relationship platonic. With all her talk of the ‘special relationship’, Britain was continually setting herself up as America’s chosen partner when, for better or worse, she was always the bridesmaid, never the bride.”

As the Financial Times commented recently, while musing on Boris’ predicament - whenever it came to the crunch, American imperialism always put number one first:

“Sentiment counted for nought when Harry Truman severed Britain’s financial lifeline in 1945, when Dwight Eisenhower pulled the plug on sterling to scupper Anthony Eden’s Suez adventure in 1956, or when Ronald Reagan ordered US forces into the Commonwealth state of Grenada before telling his soulmate Margaret Thatcher.”

It has become increasingly clear that there couldn’t have been a worse time to launch Boris’ ‘Global Britain’. But the PM’s time for phrase-mongering is over. With a majority in government, it is now a question of deeds.

Today, globalisation is being unwound. Trade wars and protectionism are on the menu. In such tough times, the more intelligent British capitalists would prefer to remain under the protection of the EU umbrella. The cold, hard fact is that the European market is far more valuable to British capitalism than the American market. The EU takes approximately 40% of Britain's exports, as against the 13% of British exports that go to the United States.

By resting demagogically on the anger in society and promising a return to Empire 2.0 to the rabid Tory ranks, the Brexiteers have got one over on the more sensible wing of the British capitalist class. But in the process, they have dragged the latter with them into the stormy Atlantic in pursuit of their unrequited love.

This is not a love story that will end well for Boris, the Tories, or for British capitalism.