Britain
Share
Tweet
The stench of sleaze emanating from Number 10 Downing Street marks the end of the Blair era. Brown is no alternative. Both men will lead the Labour Party to defeat in the future. What is needed is a genuine left alternative. That is why it is so important that John McDonnell gets the required number of nominations to be able to stand for the party leadership. 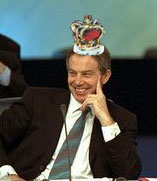 The rotten stench of sleaze and corruption threatens to engulf the Blair government in much the same way as it engulfed previous Tory administrations. This is an inevitable outcome of 10 years of Blairism.

More than 55 per cent of people now characterise the government as "very sleazy and disreputable", according to a YouGov poll last month. In the same survey, 64 per cent said they believe Labour "probably" did offer honours to wealthy businessmen who promised large loans or donations.

In practice, Blairism was a continuation of Thatcherism. Blair continued with capitalist policies where Thatcher and Major had left off, resulting in inevitable disillusionment amongst Labour's working class supporters, who were seeking fundamental change.

Blair's programme was the same as Thatcher's: to restore the fortunes of British capitalism at the expense of the working class. As a result, public spending was less than under the Tories, anti-trade union legislation was retained, privatisation was continued, and the public services were opened up to big business.

Following in the footsteps of Thatcher, Blair rested on the City of London, bankers and tycoons, overwhelmingly of the parasitic variety, to restore British capitalism. As a consequence, large sections of "old-fashioned" manufacturing industry went to the wall. British capitalism went from being the "workshop of the world" to a parasitic rentier economy, based on banking, insurance and service industries. Manufacturing has declined as a proportion of the total economy from 23% in 1990 to 14% in 2005. The number of manufacturing jobs has collapsed from 5.2 million in 1986, to 3.3 million last year. Astoundingly, almost 8,000 jobs were lost in manufacturing in January alone, with bosses shipping their companies abroad in pursuit of cheap labour.

The takeover of British Steel by the Indian company Tata speaks volumes about the weakness of British capitalism, undermined by decades of under-investment and shortsightedness. The British capitalist class and its political representatives have blighted industry, preferring to base itself upon parasitic finance capital, low-paid service industries and quick profits.

In its heyday, as Trotsky explained, the British ruling class was the most far-sighted in the world. It would think in terms of continents and centuries. Today, it cannot see further than its own nose. The collapse in the power of British capitalism into a third-rate miserable dependency upon US imperialism also reflects itself in a degeneration of its political representatives. From those nineteenth century leaders, chosen from the aristocracy and not blighted by concerns of short-term financial gain, we have the shopkeeper's daughter of Margaret Thatcher. The bourgeois Tony Blair is simply a continuation of this small shopkeeper mentality this shallow, shortsighted, class of upstarts.

Blair's New Labour Project, while continuing with Thatcherism under a different disguise, was to destroy the Labour Party and to create a new bourgeois party. To begin with this meant ditching left-leaning policies, destroying internal party democracy, and breaking the Labour-trade union links. As a first step towards this, Blair had to become financially independent of the unions. This meant of course befriending millionaire businessmen, which suited Blair and his New Labour colleagues down to the ground. Then intermediaries were found, such as Lord Levy, to procure large loans and donations from this source. It began with the Bernie Ecclestone affair and his one million pound donation in exchange for tobacco advertising in Formula One. Today it continues with the cash-for-honours scandal, where allegedly peerages were sold for large amounts of money. Of course, there is nothing surprising in all this patronage, which is part and parcel of bourgeois society, in which everything is for sale. However, the longstanding rule was that such indiscretions should be conducted behind closed doors and not disclosed publicly. Lloyd George was the past master in this enterprise, but it eventually got out of hand and had to be brought under control, for fear of provoking the indignation of the masses.

However, today's New Labour gang has no scruples. It throws all caution to the wind. They all have their snouts in the pig trough. Their problem is not that they are involved in such dealings. The problem is that they have been found out and they are now busy covering their tracks. Like a startled octopus they squirt ink in all directions hoping to stymie the police investigation led by Assistant Commissioner John Yates.

There is an air of desperation after Blair was questioned by the police for the second time. Four days after this Lord Levy was arrested for the second time on suspicion of conspiracy to pervert the course of justice. Others, including Downing Street adviser Ruth Turner and millionaire donor Sir Christopher Evans, have been arrested. They all plead innocence. There are rumours that documents have been shredded by Downing Street to destroy evidence vital to the police enquiry. "I hope it ends soon", says Blair. "I hope it ends soon", says a Downing Street senior aide, "because it is a blight on all politics, not just the Labour Party." It is apparently a "blight" not just on the Prime Minister, but on the whole of democracy. Blairite Hazel Blair admitted the affair has become "corrosive".

This all comes at a very difficult time for the Blairites. Blair is expected to announce his resignation from office in the next three months. The final phase of his premiership is proving to be tortuous. He wants to have a legacy that does not concentrate on his failings in Iraq and Afghanistan. But pressures are mounting that he should leave immediately as these last months are turning into a disaster for the Labour Party with local, Scottish and Welsh elections due in May. The whole thing is threatening to unravel as MPs look to their careers put at risk by this fiasco. The knives are out as more voices are heard calling for his early departure for the sake of the party. Even Neil Kinnock has urged Blair to stand down, but to no avail. "The parliamentary party and my local Labour party and the world and his wife want him gone", said a senior minister.

Blair, however, is not concerned about "the party", but his personal legacy and his place in history. He is above all this. He is living in a dream world, cocooned from real life. There are certain parallels with Blair and his fictional character in the TV drama, The Trial of Tony Blair. The programme made such an impact because it was seen to be so near the mark in portraying Blair's (and Brown's) character. Blair is completely caught up in his self-importance. It captured perfectly the hypocrisy of New Labour, its backstabbing, dirty deals and corrupt activities.

Blair sees himself as above party politics, as some kind of national statesman or saviour, probably bound up with his religious beliefs. Last Thursday, as news of his second interview with the police broke, Blair was in Downing Street with university vice-chancellors discussing sponsorship of his pet City Academies - the very way in which the cash-for-honours scandal began, when head teacher Des Smith told an undercover journalist that businessmen could get a knighthood or peerage for sponsoring such schools.

He continues as if nothing has happened. According to The Observer, "an odd calm has settled over Blair himself." "He just lets things roll over him now", said an old friend recently. He seems oblivious to the crisis that is enveloping his administration. Blair brushed things off in a closed meeting, comparing his situation to that of his favourite yardstick, Margaret Thatcher in 1986 during the Westland helicopter scandal which forced Heseltine's resignation from the Cabinet, but within a year Thatcher stormed to a third election victory in 1987. The comparison is somewhat of the mark, to say the least.

"In politics you get used to periodic storms", stated Blair, completely missing the point. Like so many figures pumped up with their own self-importance, in times of crisis they act irrationally. Power has gone to his head, and he is like Nero fiddling while Rome burned. He thinks he can get away with almost anything. But the ranks of Labour and its supporters have lost all trust. Even if he didn't take cash-for-honours, they wouldn't believe him anymore. Blair - and Blairism - is finished, but he refuses to go. The same was true of Thatcher until the bitter end.

Waiting in the aisles is the Brown camp, but they are becoming more and more aware of what awaits them when they finally take over from Blair. If Blair stays on, they reason, Brown will pick up all the odium for the election disasters facing Labour in the May elections. But Brown is caught between the devil and the deep blue sea. He is completely identified with Blair, Blairism and the New Labour Project. He will not be able to extricate himself from the air of corruption permeating the government of which he is a long-standing member. He is from the same stable as Blair. He has the same bankrupt pro-capitalist policies.

The tragedy of the situation is that although people have no confidence in the Tories, they are fed up to the back teeth with Blair and New Labour. A Mori poll found roughly equal numbers of voters - 68 and 69 per cent - expressing dissatisfaction with the prime minister and the government.

There is enormous discontent in the rank and file of the trade unions and the Labour Party. This is a stark reflection of the discontent within society, especially in the working class, fed up with the attacks on their living standards and conditions of work. For many there has been no respite from the Thatcher years. Things have gone from bad to worse.

That is why it is so important that everything is done to allow John McDonnell to stand. If he successfully gets the required nominations and is able to stand it will shake the entire establishment. It would open up the debate, well beyond the Brown option. In stark contrast to the disaster of Blairism attention would be focused on the need for a genuine socialist alternative. It would transform the situation in Britain.

All the discontent that has built up over the recent years needs is a point of reference. McDonnell can provide that reference! So the pressure is on to surmount this artificial undemocratic barrier and allow a real challenge to take place.

Clearly, Blair's days are numbered. The emperor has been exposed without any clothes. It is time for a radical change. It is down to the rank and file to see that this takes place. There must be no coronation. The King is dead. Down with the monarchy!