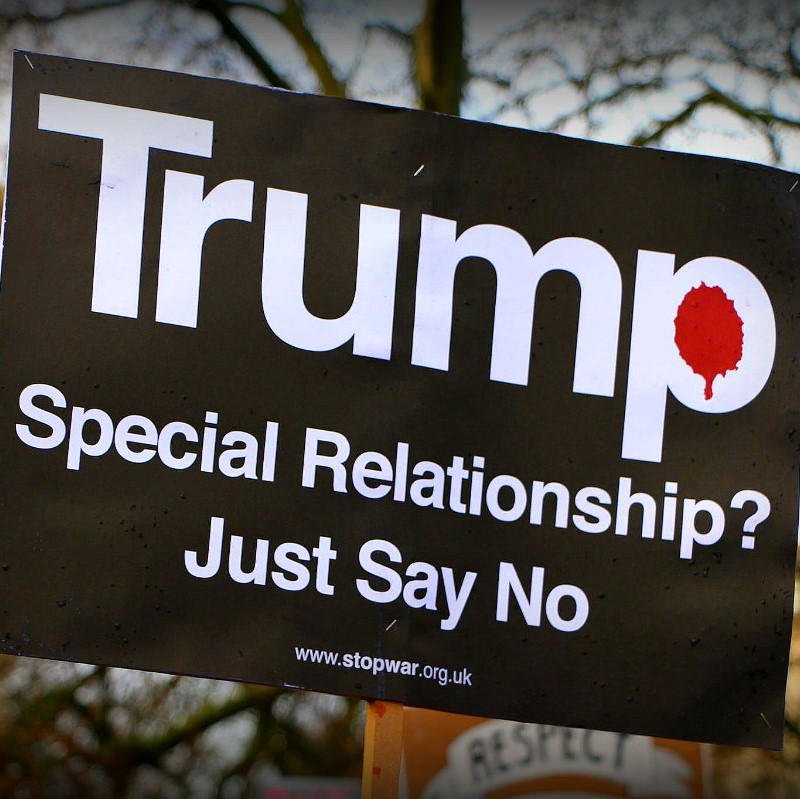 “Vote Leave - Take Control” was always a deeply cynical slogan, designed to exploit the alienation and powerlessness of the working class in the EU referendum. It is only now, however, as the brave new world of Brexit starts its lengthy unfolding, that its irony is being exposed.

Theresa May and the Tories have taken so much control and sovereignty that, according to the always sober-headed Boris Johnson, the countries are just queueing up to sign trade deals with the UK. Once again Britain proudly rules the world, finally free to do and say as it pleases. Perhaps this renewed national vigour can explain the rapidity with which Theresa May scrambled on a plane, firstly to the US, and then immediately after to Turkey, to begin talks about possible future trade deals. Afterall, so many countries are queueing up, there is no time to waste!

Only, surely if there is such a long queue to begin trade talks with the UK, and if the UK is now so proudly independent, the obvious and stately thing to do would be to invite these leaders to our shores as a display of our new-found sovereignty?

The USA also strikes us as a strange choice of places to visit at this particular time for the leader of a proudly sovereign, liberal and democratic nation, as May has recently explained we are. It has not gone unnoticed that Donald Trump will have barely unpacked his no doubt extensive belongings into the White House, and may not yet be sure of himself. Indeed, he is apparently unsure of what exactly these new executive orders he has been so enthusiastically dishing out are, and is apparently disturbed as to some of their repercussions.

In her haste to cosy up to Mr Trump, May stumbled and changed her position on his hated ‘Muslim ban’, initially refusing to condemn it. The ban itself has already been revoked by a judge, proving not only the extremely reactionary, unstable and provocative nature of his regime, but also it’s inchoate, trial-and-error nature. May’s haste to be ‘Trump’s Maggie’ therefore gave the lie to Britain’s proud and powerful sovereignty and control over its own fate.

And then came the bombshell of her invitation of Trump to a full state visit. This is, of course, in the tradition of a proud, sovereign nation like the United Kingdom, and one may think therefore that it is only fitting that the full pomp and circumstance of our newly independent state be unveiled at this time.

Only once again, the haste with which this has been brought up undermines any claims to proud British tradition. It is normal procedure for an American President to receive the honour of the full state visit two or three years after their inauguration. In recent history, Obama was invited after more than two years of his term, and George Bush, three. Furthermore, the haste of this move looks with hindsight politically foolish, inviting as it has an enormous backlash from the public that warns of a far greater and more militant protest should the visit actually happen. Could it be that May’s visit to the US, and invitation of Trump to our shores, smack not so much of control and sovereignty, but of desperation and dependence?

This unfortunate impression was only strengthened by May’s shockingly sudden appearance in Ankara to meet with another man of the moment, President Erdogan of Turkey. Amongst other things, this meeting produced an agreement for Turkey to buy fighter jets from the UK - or more specifically, from the private company BAE Systems (though the British state has a ‘golden share’ in it). The nature of that deal really proves Marx’s position that the bourgeois state is just an executive committee for managing the affairs of the bourgeoisie, for here we see the British prime minister using diplomatic muscle to win a contract for an important private company.

The combination of these two visits to two of the world’s most notorious and reactionary ‘strong men’ together paint a somewhat less flattering picture of post-Brexit Britain’s independence. They reveal that cut adrift from its main market, the EU, the British capitalists and their state are even more enfeebled and dependent than under Tony Blair’s ‘US poodle’ reign.

The next two ‘Article 50’ years will see no shortage of embarrassments for the British state. May’s apparent calm confidence will be torn apart to reveal confusion and indecision. This has already begun, as May was made to look foolish at the recent meeting of EU leaders in Malta when she idiotically attempted to sell herself as a bridge to Trump for the rest of the EU, no doubt citing the pictures of her hand-in-hand with Donald.

It was not hard to foresee the hostile and indignant response she received from the other EU leaders at this desperate proposal. The obvious point was made that Britain is in the process of leaving the EU, and is hardly in the EU’s good books - as the French Prime Minister recently had to explain to the likes of Boris Johnson, Britain must get a relationship with the EU significantly worse than countries within the EU, otherwise what would be the point of being within it?

Monsieur Hollande rubbed salt in the wound as he strongly asserted that France would soon be more influential than Britain on the world stage as “the only permanent member of the Security Council to be also a member of the EU when the UK leaves”. The comedically stupid proposal of May to liaise with Trump on behalf of the EU she is quitting was underlined when the Lithuanian President quipped, “I don’t think there is a necessity for a bridge – we communicate with the Americans on Twitter”!

May was then apparently denied a meeting she had announced with Merkel, and then flew back to the UK with her tail between her legs before the second meeting of the conference had even begun.

The embarassment continues. The Economist reports that,

Thomas Lembong, head of Indonesia’s investment board and a former trade minister, says that he has already agreed with British officials that Indonesia’s eventual deal with the EU could simply be tailored a bit to suit Britain. But, he warns, ‘Of course the UK would be in a much weaker bargaining position outside the EU, so we would expect much more favourable terms of trade against the UK post-Brexit.’

But really the most spectacularly object lesson in world trade and national interests was provided to Boris Johnson by Carlo Calenda, Minister for Economic Development in Italy. When Boris Johnson arrogantly told him that Britain would have to be given a preferable deal “because you don’t want to lose Prosecco exports”, Calenda calmly replied: “I’ll sell less Prosecco to one country and you’ll sell less to 27 countries.” Naturally.

Slowly but surely, it will dawn on ‘our’ leaders, that capitalism recognises no sovereignty but that of money and the market. Sometimes it is hard to believe that those charged with managing capitalism can be so ignorant of its realities, but it is normal that the leaders of a system in decline must shut their eyes and ears to the truth.

Any trade deal signed with Trump will hardly fill the hole left by the EU, with whom Britain trades far more than with the US. And Trump, an isolationist and hard protectionist who ‘puts America first’ will hold all the cards. The obvious desperation of May to cosy up to Trump does not presage a strong bargaining position. As the Financial Times accurately put it,

In the declining years of the British empire, some of its politicians flattered themselves that they could be “Greeks to their Romans” — providing wise and experienced counsel to the new American imperium.

But the Emperor Nero has now taken power in Washington — and the British are having to smile and clap as he sets fires and reaches for his fiddle.

On top of all this, the economic news for the Tories is worsening. The tax burden is set to rise to its highest for 30 years to plug a suddenly revealed £40bn hole in the public finances. And yet those same finances will have to be used more extensively if the Tories are to successfully bribe companies like Nissan to keep production in the UK after Brexit. Inequality is rising faster than ever.

Given that under capitalism, real control and sovereignty depend on economic forces and market power, all of this shows that in Brexit, Britain has only lost control. The only way to take it back is to expropriate those who really hold our fate: the bankers and capitalists of the world market. No sovereignty but the sovereignty of the working class against capitalism!