Details
In Defence of Marxism
23 October 2008

Brazil
Share
Tweet
The recent municipal elections in Brazil have revealed a contradictory process, with the PT gaining in smaller towns and rural areas but losing ground in its traditional industrial urban strongholds. But there were some exceptions: where the Marxists of the PT stood the party vote went up massively and several were elected.

The result of the first round of the municipal elections in Brazil on October 5 draws a picture of growing support for Lula and the PT (Workers’ Party) that won 548 mayors (137 more than in 2004, an increase of 33%) and 4166 councillors (13% more than in 2004). These municipal elections involving 130 million Brazilians and 5,565 municipalities, the biggest being Sao Paulo with over 8 million eligible to vote, were a serious test for Lula.

The main right-wing bourgeois opposition parties are the PSDB (Social Democratic Party) and the DEM (Democratic Party, an heir of ARENA, the official party of the 1965-85 military dictatorship). The PSDB lost more than 10% of its mayors and councillors while the DEM collapsed losing 25.5% of their mayors and 37% of their councillors.

But the picture is more complex than what appears at first sight. President Lula is still popular amongst the Brazilian masses and his government has mainly benefited from the booming economy of the last few years. And Brazil’s economy is still growing by 5%, in spite of the world recession that we are entering into. This success, however, cannot hide the fact that the PT, although gaining mayors and councillors has actually lost votes in absolute terms.

Furthermore, if we look at the results according to the size of the cities, it is clear that the PT is gaining ground in the smaller cities where it used to be weaker but its support in the traditional metropolitan areas, where the working class is concentrated and the PT has always had its strongholds, has been eroded   a clear warning that the workers’ patience is running thin.

Lula was re-elected with a landslide victory last year at the second round, but in the first round high levels of abstention and protest votes were a clear warning that there was mounting criticism among the most advanced layers and particularly among the workers. Workers backed him in the second round to prevent the right wing from coming back. But instead of drawing the necessary conclusions from this, Lula’s government has since then based itself on an even broader coalition involving several bourgeois parties.

Lula’s policies of class collaboration at the expense of the working class have already led to important clashes with the trade unions, like for example when Lula tried to enforce the "reform" of social security and forced the CUT (Brazilian trade union federation) into opposition. The “Reform” that provoked a long wave of strikes was approved during the infamous "night of shame" on August 6, 2003, when parliament approved it at five o'clock in the morning while 80,000 public employees were marching on the capital.

Over the last few years Lula has carried through a mixed bag of policies, on the one hand putting the pressure on to reduce workers’ living standards while trying to hold back the most advanced layers of organised workers such the Occupied factories movement, backing the repression at Cipla and Interfibras (http://www.marxist.com/brazil-cipla-workers-struggle180607.htm) which had been run under workers’ control for 5 years and now at Flasko (http://www.marxist.com/brazil-electicity-company-cuts-of-electricity-supply-to-flasko.htm), and on the other hand introducing a system of state grants and subsidies that benefited the poorest sections of the population.

Lula and the Brazilian ruling class are not willing to let the workers express themselves as an independent force and this is reflected in the PT’s electoral campaign and also in the fact that in over 2,000 municipalities the PT coalition (which already includes several bourgeois parties) was extended even to opposition parties, including the PSDB and even the DEM! (Folha de Sao Paulo, October 11).

In this situation the “Esquerda Marxista”, the Marxist left of the PT, ran an election campaign to support the PT but demanding that the party return to its founding Manifesto. In a few areas where “Esquerda Marxista” has a stronger base some Marxist candidates were selected for election.

The comrades took up the challenge of conducting a mass campaign on a socialist programme. They were conscious of the fact that the success of their campaign would show what the potential would be for the PT if it were to return to its roots and traditions and defends a socialist programme. The response was enthusiastic and Marxist candidates gained important results.

In Joinville (Santa Catarina), Marxist PT councillor Adilson Mariano won 5,574 votes and was confirmed with the second highest vote among the PT candidates in the city. A second candidate, Moacir Nazario gained 2,245 votes. This result is even more important because Adilson has been recently under heavy attack by the media, the state and the bosses in Joinville because of his relentless support for the struggle of the workers of the occupied factories of Cipla and Interfibras and earlier this year was sentenced to one year and three months jail because of his stand (http://www.marxist.com/defend-adilson-mariano-against-unjust-prison-sentence.htm). 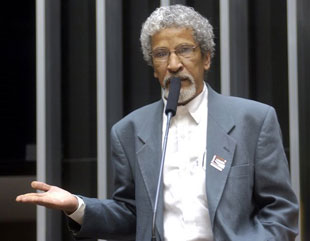 In Bauru, one of the largest cities in the state of Sao Paulo, Marxist candidate and long standing railway workers’ union militant Roque Ferreira won 3,506 votes and was elected as a councillor, scoring the second highest vote in the city and being the most voted PT candidate.

In the municipality of Caieiras, Grande Sao Paulo, where the PT had never managed to gain more than one percent, Marxist candidate for mayor Jose Carlos Miranda polled 15% leading a PT-PCdoB coalition.

The results of the Marxist candidates of the PT demonstrate how powerful the combination of genuine Marxist ideas with the name of the PT can be. They also underline the enormous potential for the struggle for Marxist ideas within the PT. These ideas can connect not only with the most advanced layers of left wing activists, but with the mass of workers and youth, who are clearly able to differentiate between the reformist of the PT and the Marxists.