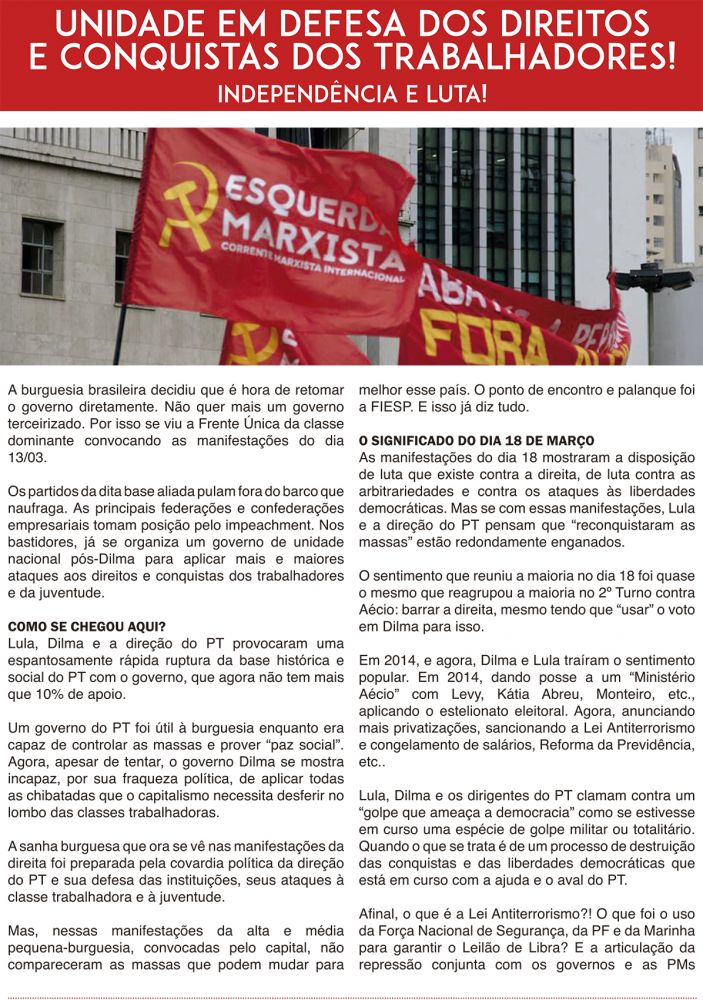 The Brazilian bourgeoisie has decided that it is time to take back direct control of the government. It no longer wants an outsourced government. For this reason, the united front of the ruling class called the demonstrations of 13th March.

The parties of the so-called allied base (supporting Dilma’s government) are jumping from the sinking ship. The main business federations and confederations are taking a position in favour of impeachment. Behind the scenes, a post-Dilma national unity government is already being organised, being prepared to apply more widespread and severe attacks on the rights and conquests of the workers and youth.

Lula, Dilma, and the PT leadership have caused an astonishingly sudden rupture between the historical social base of the party and their government, whose support is now no more than 10%.

A PT government was useful to the bourgeoisie while it was capable of controlling the masses and promoting “social peace”. Now, despite their best efforts, Dilma’s government, due to its political weakness, is unable to administer all of the lashings with which capitalism needs to strike the backs of the working classes.

The eruption of bourgeois fury that is now seen at the right-wing demonstrations was prepared by the political cowardice of the PT’s leadership, by its defence of the bourgeois state institutions and its attacks on the working class and the youth.

But, in these demonstrations of the upper and middle petty-bourgeoisie, summoned by capital, the masses that can change this country for the better do not show up. The meeting point and the rally were at the FIESP (Federation of Industries of the State of São Paulo). That says it all.

The significance of 18th March

The counter-demonstrations of 18th March showed the willingness to fight that exists in society, against the right, against arbitrary rule, and against the attacks on democratic liberties. But if Lula and the PT leadership think they have “re-conquered the masses” with these demonstrations, then they are completely mistaken.

The sentiment that brought together the majority of people on the 18th was almost the same that regrouped the majority in the 2nd electoral round against Aécio: to block the right, even if that meant to “use” your vote on Dilma.

Both in 2014 and now, Dilma and Lula betrayed the popular sentiment. In 2014, by swearing in an “Aécio” government with Levy, Kátia Abreu, Monteiro, etc, in what amounted to electoral theft. Now, by announcing further privatisations and by sanctioning the Anti-Terrorism Law, the freezing of salaries, the pension reform, etc.

Lula, Dilma, and the PT leadership cry out against a “coup that threatens democracy” as if a military or totalitarian coup was going on. What is really happening is that the conquests and democratic liberties won by workers are being destroyed with the aid and the endorsement of the PT.

After all, what is it with the Anti-Terrorism Law?! What was it with the use of the National Public Security Force, the Federal Police, and the Navy to guarantee the auctioning of the Libra oil field? And the joint statements of repression of state governments and state Military Police? And the silence of the government and the then Justice Minister, José Eduardo Cardozo, about the arbitrary violence of the Federal Police?

Our battle on the 30th

The Esquerda Marxista was present in the actions of 24th March called by Frente Povo Sem Medo (People Without Fear Front), and was also present yesterday, 31st March, raising high the independent flags of the workers and of the fight to defend democratic liberties - with socialism.

We do not support the Dilma government and we fight against its policies, but we also do not support any impeachment or removal from office. We prefer that all these warring factions at the top keep paralysing each other, battling one another and becoming politically demoralised, while the workers regroup from the blow delivered by the PT and force the unions and popular organisations to position themselves in unity against the adjustment policies and in rupture with capital, thus opening up the possibility for the creation of a National Constitutional Popular Assembly, a Workers’ Government, and for taking the revolutionary measures necessary against native and international capitalists.

Only continuing the fight against capitalism opens up the way to defeating the powerful. Only a revolution can put an end to these rotten institutions and attend to the most heartfelt demands of the people. Only the mobilisation and organisation of this “third force” decisively entering the battle can break the cycle of false polarisation between PT and PSDB. The real polarisation is the class struggle between the proletariat and the bourgeoisie and its servants.

We were here on the 31st defending the central axes of the original call of these actions, which proclaimed:

To this we add the political banners that open up a path to defeating the right-wing opposition and all its goals, the totalitarian judiciary, and the government of capital, now led directly by Dilma and Lula. We denounce the false polarisation of two warring cliques and we want to help bring to combat a third force, the working class and the youth, to defend independently its immediate and historical goals, its conquests and demands, and the end to all oppression and exploitation.