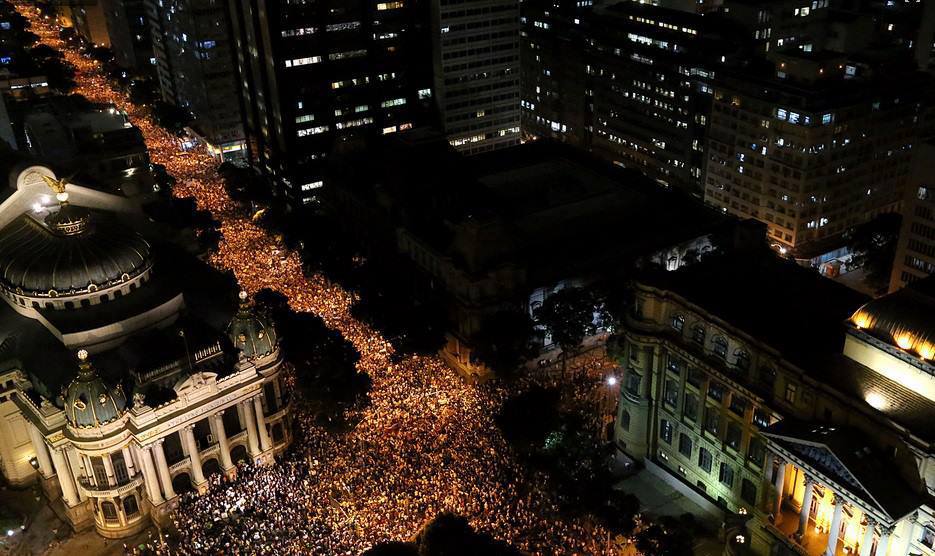 Brazil is currently experiencing the largest demonstrations seen in the country for over 20 years. Today it has been estimated that 200,000 Brazilians have been protesting in eleven cities across the country, with the demonstration in Rio de Janeiro attracting 100,000 people

The protests were sparked by an increase in the cost of public transport, but under the conditions of police brutality and the ever increasing cost of staging major sporting events, that spark was enough to set alight the contradictions that have been building up in the form of poor healthcare, poor education and rampant corruption. With the tentacles of capitalist crisis beginning to reach Brazil, many of the workers and youth in the country are frustrated with the current system and have taken to the streets to demand change.

The following articles were written by comrades in Brazil who have been participating in the demonstrations and uniting all the struggles of workers and youth for a better way of life. In the face of such an uprising by the youth and workers, with a spirit to match the current movement in Turkey, and past movements across Europe and the Arab world, these comrades are demanding that the governing PT workers’ party and its leader Dilma Rousseff break their alliances with the bourgeois parties and implement socialist policies in the interests of ordinary people. 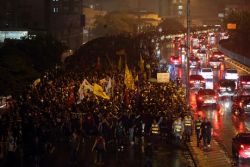 In São Paulo, approximately 15,000 youth and workers have been demonstrating against the increase in the price of public transport tickets. In Florianópolis the bus drivers and conductors went on strike. In Recife, the subway workers are threatening strike action. For June 20, demonstrations are scheduled across the entire country against fare increases. In Mato Grosso do Sul, in a land occupation, a Terena Indian was killed by federal troops. In São Paulo the district attorney has asked the Military Police to shoot the protesters. The temperature of the class struggle is rising and everyone can see it except those who go sightseeing in Paris and forget about the suffering of the people.

Another important fact is the attack launched against the façade of the national headquarters of PT, next to Praça da Sé. Even though it was a small group of demonstrators (PT officials said that about 200 protesters fleeing the brutality of the police, were passing by the PT headquarters, and a few of these stopped in front of the building and began to attack it), this is significant. If the leadership of the party and the PT government were implementing a policy that defended the interests of workers, who amongst the protestors would even consider attacking the headquarters?

The outrage is growing and this is directly related to the economic situation. The crisis is coming and the measures taken by the government - exemption of employers' social security contributions, investment in private groups, the new Provisional Measure on Harbours, widespread privatisation ("concessions"), further concessions and auctions in the oil industry next semester - all this does not solve anything and only accelerates the arrival of the crisis. The stock market is falling, the dollar is getting stronger and, most importantly, food prices are on the rise. The official inflation rate is around 6%, but anyone who shops knows that food prices have risen 20%, 30% or even doubled for some items. This is what counts in the wallets of the workers.

Ministers may give all sorts of excuses, Dilma can schedule a "positive agenda", but the truth is that what hurts the pocket of the worker can only be solved by adopting tough measures to confront the employers and imperialism; and this government, with PT involved in alliances with the bourgeoisie, cannot afford to adopt those measures!

For most of the leaders of the PT they claim to defend "our country", "our alliances" against the PSDB, which is the "reaction". Meanwhile, when it comes to announcing the increase in fares in São Paulo, Mayor Haddad, from the PT, stands side-by-side with Sao Paulo governor Alckmin, from the PSDB. When it comes to criticising the protesters and defending the actions of the Military Police, Haddad again joins in with Alckmin.

Then, when the mainstream press celebrates the fall of Dilma in the polls, the leaders of the PT can not explain anything and just complain about the PSDB as the 'party of the press'.

The world in turmoil

Dilma, after amending the measure which reduces taxes on municipal transport, remained silent about the widespread fare increases which have been implemented across the country. These leaders have nothing to say because they refuse to break with the bourgeoisie, with big business and want to "rule with normality." The problem is that the whole world is ceasing to be "normal" and the old class war resurfaces in earnest. Sweden burned for weeks during the revolt of young immigrants setting fire to restaurants, schools and banks leaving messages saying: "a place I'll never be able to go to." Social inequality leads to revolts like we’ve seen in Sweden, Turkey and Brazil.

It's just the beginning of a whirlwind

The newspaper Folha de São Paulo described the experience of one person who, while out driving, witnessed the terrifying war of armed police against unarmed youngsters, attacking them with tear gas, pepper spray and rubber bullets on the streets of São Paulo. The workers and youth who find that the wages they receive are not enough to pay for rent, transportation and food at the end of the month are even more scared than such witnesses. They are frightened and tired of coming and going to and from work on buses and subways which are completely packed, in which they do not fall because there is no space to fall into.  They are tired and frightened because they live in the distant suburbs terrorised by police and gangs. Beyond fatigue, they begin to look for a way out, and they struggle and revolt! But it is only the beginning! Stronger winds will blow.

The way forward is the struggle

In the midst of all this, the workers forge a way forward: a strike in Florianópolis was met with a law decreeing that during the strike "100% of the buses have to run". This decree was correctly rejected by the workers and by taking their stand they have already received support from other unions and popular movements. In Recife subway workers are also threatening a strike.

The demonstrations which have taken place in Goiânia, Porto Alegre, Rio, São Paulo, and other cities and capitals against the fare rises of buses and subways are just the whistle warning that the train is coming. The youth in Sao Paulo, including the youth of the PT, have taken the correct path and are on the streets demonstrating against the fare rises implemented by Alckmin and Haddad.

This first movement mostly composed of young people is a signal that the atmosphere inside the PT is starting to thaw, and shows that workers and youth will demand from their leaders, of the UNE students' organisation, the CUT trade union, the PT Workers Party, much more than simple statements or "positive agendas" which solve nothing. The alliance with the bourgeoisie and its parties must be broken and the demands of the workers and youth must be met.

The Marxist Left is in the struggle with the workers and youth. A new situation is opening up! The pressure cooker is starting to boil and in the next period, participating in the struggle, we will enter into a dialogue with members of the PT to ask them to actively support the thesis Turn Left - Retie the knot with Socialism in the internal election process of the party.