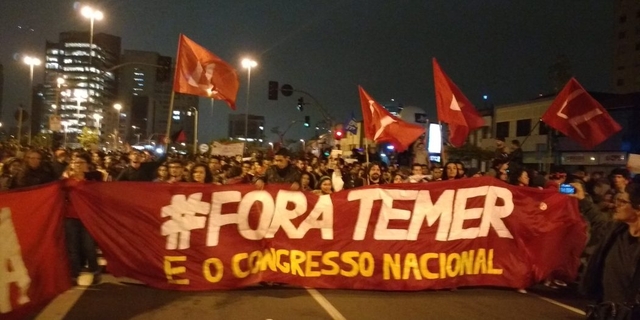 The Temer government is trying to hang on to power, by playing up growth in the economy and by accelerating its legislation attacking the working class. Yesterday Termer’s supporters in the Senate succeeded in approving the Committee of Economic Affairs’ (CAE) report on Labour Reform. The intention is to demonstrate that this government, despite lacking any social base, might still be of some use to its capitalist masters.

In a statement, Temer celebrated the 1% growth in GDP registered in the first trimester of the year, and hailed the result as representing "the revival of Brazilian economy on solid and sustainable foundations". But is this really so?

Even the analysts of the bourgeoisie are cautious and are prepared to state that, at best, it can be said that the economy’s deterioration has stalled. Compared to the same trimester last year, there has been a 0.4% fall in GDP growth. The small amount of growth that Temer speaks of has come after more than two years of decline.

The unemployment rate remains at high levels; according to the Brazilian Institute of Geography and Statistics (IBGE), the unemployed number more than 14 million. Household consumption and private investment both continue to fall. There is no indication whatsoever of a "solid and sustainable foundation" to the economy.

The crisis and the divisions within the bourgeoisie

The crisis in the economy reverberates through the political crisis. A sector of the bourgeoisie, aligned to US imperialism and following its policy of "spring-cleaning", has found itself in a stalemate scenario. After making moves to end the Temer government, through whistleblowing, recording of JBS entrepreneurs etc., it finds itself in an impasse because it does not have a unity candidate capable of stabilizing the situation.

At an international level the bourgeoisie are divided and this also finds a reflection in Brazil. This can be observed from the editorials of the main bourgeois newspapers. The Globo has demanded the resignation of the government and has called for indirect elections; meanwhile the Folha supports intervention by the Superior Electoral Court (TSE) and direct elections; and the Estadão has criticised the abuses of the Lava Jato investigations and has called for the preservation of the current government’s economic agenda.

The Democrats (DEM) and the Brazilian Social Democracy Party (PSDB) are internally divided between remaining in the government and leaving it. Even the judiciary is divided, as can be seen in the case of the trial of the Dilma-Temer electoral alliance which is currently being carried out by the TSE; and in the recent clashes with the minister of the Supreme Federal Court.

The reformist road and the position of the Marxists

A Wide Front for Rights Now has been formed, encompassing almost all of the left: the Frente Brasil Popular and the Frente Povo Sem Medo; the Workers' Party (PT), the PDT and the PSOL, CUT, CTB, UGT and Intersindical, UNE, MST and MTST, as well as other organizations and movements. The statement of the Front reads: "Only the direct election, and therefore popular sovereignty, can re-establish legitimacy to the political system". This sentence summarizes all of the problems contained in the watchword, "legitimacy". New elections can only help this  demoralized system to recover a bit of its lost legitimacy. It is not a coincidence that a fraction of the bourgeoisie, as the editorial of the Folha expresses, supports the same route forward.

The reformists are unable to see beyond bourgeois democracy. In the case of the PT, their reasoning is quite clear: they want to bring Lula 2018 to 2017, taking advantage of his lead in the poll. But a potential new Lula government will only mean the continuity of austerity and counter-reforms, which would bury both the PT and Lula as a leader of the workers' movement.

Marxist revolutionaries on the contrary look beyond the limits of bourgeois democracy and point the way towards abolishing the capitalist system and building a new socialist society. Fighting for more elections is not the solution.

Esquerda Marxista argues that in the face of the tremendous failure of the bourgeois institutions, the role of the leadership of the workers' movement should be that of explaining that only the self-organization of the masses can open a path for the working class to positively move forward.

It is a unified struggle against the welfare and labour reforms; education reforms and outsourcing; against the government and the National Congress; and the fight for a true workers’ government that can allow the working class to take advantage of the cracks in the ruling class and help to move its struggle forward.

This is what the General Strike on the 28 April and the great demonstration in Brasilia on the 24 May expressed, and what must be expressed by the upcoming General Strike on 30 June. However, we must point out that 24 hour or even 48 hour general strikes are not enough. What is necessary is an open ended strike until all of the attacks are withdrawn. In any case, we will actively participate in and mobilize for the strike of the 30 June and will push for it to transcend the intentions of the reformist leaders.

To strengthen the movement of the masses and to give it organization, we advocate for the convocation of a National Summit of the Working Class to gather trade unions, student and popular movements, to give a voice and a vote to the base of the movement, so as to bypass the blockage in the form of the conciliatory leaders.

Instability is deepening, the bourgeoisie is in a position of stalemate and the class struggle is heating up. In this situation, only the mobilization of the working class - independently of the bourgeoisie - can open a way forward. We say down with Temer and the National Congress, we fight for a Workers' Government and we claim the need of a National Constituent People's Assembly to open the path towards the revolution against the capitalist system, its institutions, its parties and its henchmen.