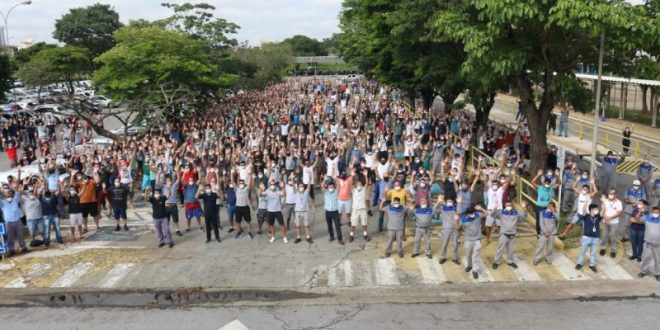 Ford announced last Monday the end of production of vehicles in Brazil. The decision led to immediate cessation of activities at the Camaçari (Bahia) and Taubaté (São Paulo) facilities, maintaining only the production of parts for stock, while the production of Troller jeeps will be maintained only until the last quarter of 2021 in Horizonte (Ceará). There are thousands of workers who will be newly unemployed in Brazil and Argentina, in addition to the thousands indirectly affected by the layoffs.

According to Júlio Bonfim, president of the Camaçari metalworkers Union, 12,000 Ford workers will lose their jobs. However, in his speech, he suggests that the problem of layoffs would have been solved with a negotiation between the bosses and the workers:

“The closing took everyone by surprise. After almost two decades profiting in Camaçari, Ford closes its doors without any negotiations, in a regrettable situation and of complete disrespect for thousands of workers.”

The same perplexity regarding the position announced by the automaker is shown by Claudio Batista of the Metalworkers Union of Taubaté and Região (Sindmetau), who states in a message that Ford’s decision was “unilateral” and “without any negotiations with the Union.”

This is the same hesitant stance of the leadership of the labour movement that led in 2019 to the closure of the Ford plant in São Bernardo do Campo (SP). At the time, union leaders proposed a boycott campaign: “Don’t buy a Ford until the company decides to stay in SBC”. Wagnão, from the PT, and president of the Metalworkers’ Union of ABC, at the meeting in which he participated with the leadership of the automaker in the USA, even proposed to help the company find a buyer – to collaborate with the bourgeoisie to “protect” jobs. This is what is explained in the article published by Esquerda Marxista denouncing the position of these leaders.

Cipla's experience in 2002 serves as an example of what should be done when the boss threatens to close a factory. The company, located in Joinville, had more than 1,200 workers and was occupied. A factory council was formed in which the workers themselves decided what should be done. This was the beginning of the occupied factories movement, led by activists from Esquerda Marxista, which became proof of the workers' great fighting capacity.

However, the leaders of the left who once stood for strikes and occupation of all Ford factories, under the control of the workers themselves, have deviated from the struggle and adopted the Alberto Fernandez government in Argentina as their example, where Ford continues to exploit its workers under a “milder” form of capitalism. This is what Guilherme Boulos suggested via Twitter:

“Ford is going to close all of its factories in Brazil. It will continue production in Argentina and Uruguay. So an impeachment, a spending cap, a labour reform and a pension reform are not enough to maintain businessmen’s 'confidence'?”

In other words, Boulos demands Bolsonaro to be consistent with economic liberalism, but at no time does he propose a fight against the bourgeoisie. Interestingly, Luciano Huck, a television presenter and representative of the political right, has a similar position:

“Ford, one of the largest automakers in the world, leaves Brazil to remain in South America only in Uruguay and Argentina. There are more than 5,000 jobs here. There is a lack of coordination and lack of confidence in the country. It is an effect of the pandemic too, but it is an absence of leadership.”

The problem is that capitalism has no borders and the same layoffs that apply in Brazil also apply in other countries. Ford is just one example, but it is worth remembering that in May last year, Renault's management decided to lay off 15,000 employees worldwide. In the same month, Nissan announced the closure of factories in Spain and Indonesia.

Fight back to save jobs!

Ford posted a net profit of $1.1 billion in the second quarter of 2020, showing an increase compared to a profit of $100 million in the same period in 2019. This is a tendency of the capitalist market: to increase the rate of profit at the expense of the lives of workers around the world, leading millions to hunger and misery.

In 2018, the automaker's chief financial officer, Bob Shanks, had already signalled the possibility of the closure of factories in South America, showing great concerns about increased profits:

“Our business in South America lacks a strong competitive position with pillars of profit […] We did not obtain an adequate return on investment in the most recent economic cycle, which runs from 2004 to the present. For these reasons, we are moving forward with a significant redesign of our business model with a focus on where to play and how to win.”

Playing and winning, in this case, has only one meaning: attacking the workers even if it leads to poverty and death. It seems like an exaggeration, but it is not. This is the logic of the capitalist system that during the COVID-19 pandemic has not spared workers from further attacks.

The closure of Ford's factories, and the dismissal of workers, must be combated with struggle, strikes and occupation. There is no other way out, only the occupation of the factory under workers' control can lead to the real emancipation of workers. This is the path of struggle against the whole bourgeoisie, in Brazil and in the whole world.