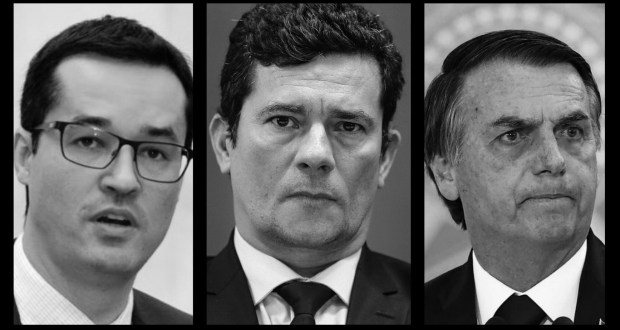 Yesterday, The Intercept Brazil news site published a number of correspondences between former judge Sergio Moro, and the Lava Jato (“Car Wash”) prosecutors, led by Federal Public Ministry of Brazil attorney, Deltan Dallagnol. The Operation Car Wash corruption case led to the arrest and imprisonment of (among others) former PT president Luiz Inácio Lula da Silva (“Lula”), who was convicted without evidence. These correspondences reveal the political objectives behind this operation, which included action to organise fraud in the 2018 elections.

Esquerda Marxista presented its analysis of the Lava Jato case a few years ago. In an article from July 2016 we said the following:

“The Lava Jato operation aims at a ‘General Cleaning’

“As Esquerda Marxista has explained previously, what is progressing in Brazil flows from the need for the bourgeoisie to demoralise left-wing and workers' organisations. It is also an attempt to promote a general cleaning up of the top of the bourgeois political system in order to save their institutions and destroy the capacity of the working class to resist.

“The judiciary took on the role of supreme arbiter of political disputes between bourgeois factions and between the classes, as well as being in overall control of bourgeois political institutions. It is a Bonapartist judiciary that intends to govern outside the law and impose, under the guise of legality, the general interests of the bourgeoisie, and of capital, no matter what. (‘The Ultimate Objectives of Lava Jato, in Brazil, of Clean Hands, in Italy, and consequences’, published on 27 July 2016).

The goal of a "general cleaning," of getting rid of political leaders from different parties in order to save the bourgeois institutions from demoralisation and popular anger, is evident in one of Moro's messages to Dallagnol on 13 March 2016, published by The Intercept:

"I still distrust much of our institutional capacity to clean up the Congress. The best thing would be for Congress to self-regulate, but this is not on the cards. And I do not know if the Supreme Court has enough strength to prosecute and convict so many powerful people!"

In order to develop this cleaning operation, in the face of the bankruptcy of the bourgeois parties - which are incapable of producing a candidate "of the system" with a chance of winning the presidential race - they politically defrauded the elections, preventing Lula from being a candidate.

The bourgeoisie did not want the PT to return to power. The party was no longer useful, and unable to control the mass revolt, as was shown in June 2013. In addition, the PT proved incapable of organising the approval of measures to protect the interests of the ruling class (labour reform, public spending caps, social security reform, etc.) That is why they started a bourgeois operation so that Lula, who was first in the polls, would not be a candidate.

And after already consolidating the swap of Lula for Haddad, indignation spread in the exchange of messages in the group of Lava Jato prosecutors after the release of Lula's interview with Folha de São Paulo. Attorney Laura Tessler writes: "I do not know for sure... but an interview before the second round could get Haddad elected." They hoped to postpone the interview until after the election, or turn it into a press conference, rather than an exclusive interview, seeking to lessen its electoral impact. In the end, Luiz Fux, the then-president of the Supreme Court, decided to prevent Lula's interview.

In order to achieve its political objectives, the judiciary resorted to manoeuvres via the media, and trampled upon the very principles of bourgeois legality, such as the presumption of innocence and the need for evidence for a conviction. It is worth remembering that, in the complaint against Lula, the prosecutors themselves said they had no evidence that he was the owner of a luxury apartment in Guarujá, allegedly obtained via corruption, but that they were nevertheless certain of it.

Under bourgeois law, the judge cannot advise either party (defence or prosecution), maintaining impartiality. What is clear from the revealed messages is that Moro helped the prosecution, charged investigators, decided the sentencing in advance, and thus acted as an investigator and inquisitor of the accused.

The efforts by the Brazilian judiciary to defraud Lula from standing in the 2018 elections reveals the state is just a "committee to manage the affairs of the bourgeoisie" / Image: PT Brasil

The policy of class collaboration carried out by Lula and PT did not save them from the hatred of the ruling class. We always stood against Lula's conviction and political imprisonment over the Lava Jato legal fraud, coordinated by the US Department of Justice. This recent disclosure of exchanges of messages involving the key figures in the Lavo Jato operation raises the question of the need to cancel it, under the very criteria of bourgeois legality itself.

The case also shows that the state and all its institutions (executive, legislative and judiciary) are not neutral. As Marx and Engels already affirmed in the Communist Manifesto, the state is nothing more than a "committee to manage the affairs of the bourgeoisie."

The Supreme Court proved this once again in a recent decision that allows for the privatisation of subsidiaries of state and mixed capital companies without the need for approval by the National Congress, facilitating the advancement of the ultraliberal programme of Bolsonaro and Paulo Guedes. Despite the conflicts within the bourgeois class and within the government itself, all fractions of the bourgeoisie are united and campaigning for the approval of the pension reform bill in the first semester.

The immediate task of the working class and the youth is to build for the general strike on 14 June, mobilising in each place of study and work so that the country is brought to a standstill, and the streets are taken over by large mobilisations. We have already seen on 15 and 30 May that this is possible. Moreover, it is necessary to build an all-out general strike to stop the social security reform and overthrow the Bolsonaro government. Only the action of the masses can guarantee victory against the apparatus of the bourgeoisie, which they use as an instrument to maintain the regime of oppression and exploitation of the majority of the population.