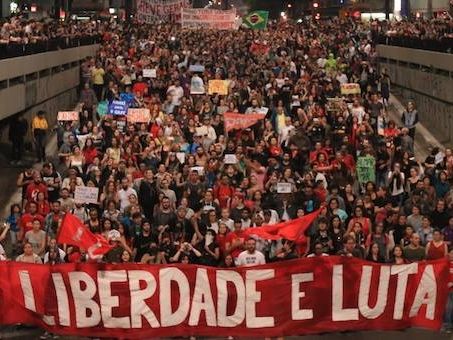 Statement by the Marxist Left (Esquerda Marxista), Brazilian section of the IMT

The judiciary continues its abuses of power. The Federal Supreme Court denied Lula’s request for habeas corpus, and on the following day, before new appeals were filed to the Regional Federal Court of the 4th Region, judge Sérgio Moro ordered Lula’s arrest.

The rejection of habeas corpus comes after the precedent set by Supreme Court ruling in 2016, authorizing the enforcement of the sentence upon conviction on the second instance. [In Lula’s case this means that while he can still appeal against the court ruling to a higher court, he will start serving the jail sentence while he appeals] The constitution states that “no one shall be held guilty until a final conviction sentence is passed.” The text is very clear, but for the distinguished judges of the Supreme Court, everything is relative—at its core this is a political question.

Another piece in this trial was the maneuver by the president of the Supreme Court, Carmem Lúcia, not to put up to a vote in the first place the Direct Constitutionality Action (Ação Direta de Constitucionalidade - which is a request to check the validity of a given decision against the text of the Constitution), which would have challenged all instances of prison after a second-instance conviction while the appeal process is still on. Instead, she only put to a vote the habeas corpus in Lula’s case, allowing judge Rosa Weber to hypocritically justify her vote against Lula on the basis of the 2016 case law, despite her position against prison after conviction on second-instance.

As we have previously explained, the Brazilian judiciary has elevated itself to play a bonapartist and totalitarian role. Already in the so-called “mensalão” trial, a frantic media campaign was carried out to criminalize the PT—which included the jailing of party leaders without evidence—seeking to demoralize and criminalize the workers’ struggle. The Marxist Left was one of the few left-wing organizations that put forward a campaign against this, advancing the need for a national workers’ meeting against the criminalization of the working-class movement. Unfortunately, Lula, Dilma, and the PT leadership chose to boycott these initiatives and to allow the party leaders to be arrested, without putting up a fight or any resistance.

The main political aim of the “Car Wash” (Lava Jato) criminal investigation is to carry out a cleansing of the rotten political system, in order to save it from widespread discrediting and popular anger. The highly publicized arrests of politicians and businessmen are an important component in the attempt to give an impression that “the law applies equally to all,” and “the powerful are also going to jail.”

The swiftness of the cases involving Lula and the PT is motivated by the ruling class’s interest in demoralizing the left and the labor movement as a whole. After all, the former president, who was a metalworker and trade unionist from a party built by the working class, is now going to prison.

The bourgeoisie has decided to put an end to the era of class collaboration. Since June 2013 it became clear to the ruling class that the PT was no longer capable of controlling the masses; it had therefore become useless for their purposes and was discarded. The deep crisis of capitalism gives rise to the need for a bourgeois government to lead the state apparatus with a firm hand and ruthlessly carry out attacks against the working class.

The Marxist Left opposes Lula’s conviction and incarceration without evidence, and we defend his right to be a candidate. However, we must point out that the years of PT government were a period of attacks against the working class and of subservience to the bourgeoisie and to imperialism. For example, five out of the six judges who rejected Lula’s habeas corpus were appointed by Lula or Dilma themselves. A new PT government would bring nothing new. For this reason, we support PSOL’s candidacy and we oppose a the idea of a “front for democracy” with an electoral aim that would lump together the PSOL, the PT and bourgeois parties like the PSB or the PDT—which would only continue to put forward a policy of class collaboration.

The United Front we need is not one to defend the PT governments, or support the election of a new PT government. Instead, it should serve to firmly oppose Lava Jato and the judiciary, Lula’s imprisonment, and defend democratic freedoms.

The Marxist Left fights against the actions of extreme right-wing groupings that use fascist methods against left-wing militants, such as the attacks against Lula’s caravan in the South Region. We reject the threats coming from sections of the army, such as general Eduardo Villas Bôas’s statement on the eve of the Federal Court trial, declaring that he stands against “impunity” and that the Brazilian army “is paying close attention to its institutional missions.” That is, he was clearly threatening with a military coup if the Supreme Court accepted Lula’s habeas corpus.

At the same time, we argue that today there is no social basis to support a fascist regime, and that the bourgeoisie and foreign imperialism would not choose this option to address the current situation.A military regime would not have the support of broad sections of the population, with the experience of the dictatorship still fresh in their memory. The majority of the bourgeoisie rejected through the media the statement made by the general. The editorial in the newspaper Folha de S.Paulo concluded that such a statement “the disservice rendered by one who is responsible for the obedience of the Army to the civil command, therefore, deserves a strong repudiation.” They would prefer to continue to seek a renewal of their politicians and of the bourgeois democratic regime, increasing their attacks against the working class, against democratic freedoms, through repression and criminalization.

In the rank and file, outrage against the political and economic situation is increasing, and the youth and workers continue to struggle—as seen in the successful municipal workers’ strike in São Paulo or in the massive reaction against Marielle’s assassination. Unemployment remains high, the National Congress just presented the “agribusiness” with over 10 billions in amnesties in their Funrural (social security) payments, and wages are being driven down. All of this will provoke more revolts, strikes, and demonstrations.

As we draft this article, Lula is at the headquarters of the ABC Metalworker’s Union, which is being surrounded by demonstrators. We believe that he should not comply with the illegal arrest order and should not turn himself in. If he does not surrender, the political pressure will rise, and the labor struggle will gain momentum.

Therefore, the Marxist Left is participating in the demonstrations against Lula’s imprisonment with our positions, including the demonstration taking place right now at the ABC Metalworker’s Union.

It is necessary to continue to struggle against capitalism and its institutions: the judiciary, the police and the army, and the governments and parliaments that continue to take away the rights of our class. The state is at the service of bourgeois business. It is necessary to build a political alternative with class independence and with the ultimate aim of socialist revolution.