The Marxist Left (Esquerda Marxista) stood in the internal elections of the PT winning a sizeable vote and a position on the national leadership. This represent the willingness of thousands and thousands of workers in the ranks of the party to break with the bourgeoisie and fight for the ideas of genuine socialism.

Build a Marxist organization with a mass influence in the Workers’ Party (PT)! 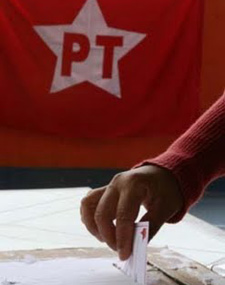 Thus, we started with the thesis, “Turn to the left! Back to Socialism!”:

“Now is the time to be realistic, or the party of the working class will pay dearly for the economic chaos that the capitalist system has imposed on the world. Either the PT breaks the coalition with Sarney, Collor and the capitalist parties and takes measures in defence of the working class or we may lose the elections in 2010, allowing the right to return to the presidency of Brazil and block the road to socialism.”

The internal elections in the party (PED) have come to a close, where more than 500,000 members voted, and we can state that the “Turn to the left! Back to Socialism!” list has played an important role in this unequal battle, winning representation for one of our comrades on the National Leadership of the Party.

We are swimming against a powerful current of the bureaucratic machine of the party and currently have 3,407 votes for our list and 3,241 for Serge Goulart, our candidate for the National Presidency of the Party.

We very much appreciate the votes we have received, which represent the willingness of thousands and thousands of workers in the ranks of the party to break with the bourgeoisie and who could not express themselves strongly because the majority of the leadership of the party, by abandoning class independence and establishing a shameful alliance with the parties and representatives of the enemies of the workers was necessarily outside of the ranks and of any democratic debate, reproducing the typical methods of the bourgeois parties which may later lead to the complete destruction of the PT.

“Only socialism can open the road of progress for humanity. We must break with the class collaboration with the bourgeoisie and its parties, in the government and in Congress, with the support of grassroots organizations and mobilisations and begin to govern in the interests of working people in the city and countryside.

“The current coalition government defends the interests of the capitalists. The so-called ‘allied base’, which also includes the parties of the military dictatorship, is only a majority in Congress when it matters to the capitalists. No project of real and direct interest to the working class will be passed by it.

“It is time to break with the enemies of the working class and to govern by relying on the support of the mobilisation of millions of workers in the struggle for its own interests.”

(These of the “Turn to the left! Back to Socialism!” list)

How can it be explained that, over and against a programme of class collaboration and against a powerful apparatus of millionaires subjected to the interests alien to the class, the “Turn to the left! Back to Socialism!” list practically received double its vote compared to the internal elections of 2007?

Votes per state for Serge Goulart and for the list “Turn to the left! Back to Socialism!” (“Chapa”) There is only one explanation: there is life, and a lot of life, within the ranks of the party. This vibrancy can burst through at any time like burning hot lava bursting through a dormant volcano. For this reason, the apparatus was heavy and in many cases often held discussions in small places, and in others didn’t hold them at all.

Despite finding the PED to a flawed and antidemocratic formula, in a situation without major mobilisations, controlled by a leadership that has mainly adapted to the bourgeois, we can say that this same leadership was not able to lull the vibrant ranks of the party. The votes we received show that at any time, in a situation of the advancement of the masses, the volcano could release fire and the Marxist organisation will rise to the heights of the tasks before it to advance towards socialism. The only way the pro-bourgeois can stop the lava from spreading is to accelerate the steps towards the destruction of the party. But this will also cause reactions and explosions, even amongst the members of the leadership.

The existence of the Esquerda Marxista (Marxist Left), fighting inside the PT against the alliance with the bourgeois, has made significant progress in Salvador, Fortaleza, Camaçari, Guarulhos, ABC, Porto Alegre, São Paulo, Joinville, Campo Grande, Bauru, amongst others.

With the votes for our list and our candidate for the presidency of the PT we can awaken the potential that have we have to build. We were right in our choice and our political line correct, and now the fight continues for what we described in our thesis:

“A PT government supported by the CUT (the only genuine trade union federation in Brazil), the MST, by the popular organisations, has the ability and strength to end financial speculation, govern exchange rates, enact a monopoly on foreign trade, and to begin taking measures for planning the economy in the interests of the oppressed and exploited.

“It is our job as PT members and as socialists to explain that as against anarchy and chaos, against the permanent crisis of the regime of private property of the means of production, against the consequences of an economy based on the pursuit of profit, the only way out must be based on collective, socialist ownership. A socialist government with an economy planned according to the needs and interests of working people and democratically controlled by the working class.

“We invite all members of the PT to join us in the fight for the ideas of genuine socialism, for a workers’ and socialist programme capable of opening a way forward in this world of horror that capitalism and its survival have imposed on humanity. We must re-arm the party and build a mass socialist tendency against class collaboration and reformism to advance and win the elections of 2010.

“The PT needs to return to organising and mobilising the youth and workers in the struggle for socialism otherwise political demoralisation will mean the return of the Presidency of the Republic to the capitalist right and will enable them to continue to control the country. The PT government has to support and find support in the Venezuelan revolution, withdraw the troops from Haiti and join in the struggles of the workers throughout the world against capitalist oppression and exploitation”.

It’s time to move forward in the building of the Esquerda Marxista! Join us!