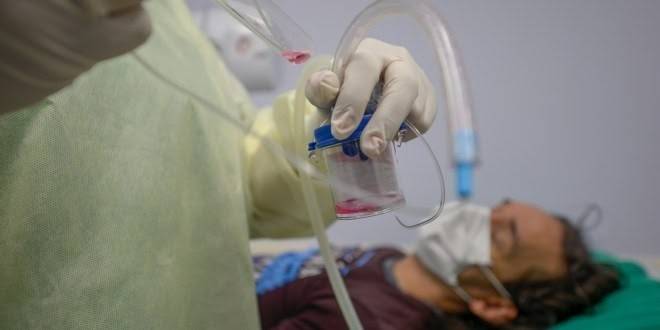 The first case of Covid-19 in the Amazonas state was identified on 13 March. Since then, 229 people have already tested positive for the new coronavirus. Most of them are in Manaus, but 24 people have been diagnosed in the rest of the country.

Although the growth of the disease in the state is lower than in other places in Brazil, its speed is frightening. To put it into perspective, between 30 and 31 March, 24 new cases and two new deaths were reported. On 1 April, there were 25 new cases, and on 2 April, 29 cases. There are also six deaths under investigation.

The situation is even more worrying due to the very likely under-reporting of cases. Only patients with the most severe symptoms are being tested, while public and private hospitals deal with thousands of people with typical symptoms of the disease. Anyone who wants to be diagnosed needs to pay out of their own pocket to have it done in a private lab.

With overcrowding, health workers become even more vulnerable to the virus. There are already 25 cases between them, which shows the working conditions and lack of safety to which those facing the pandemic are subjected.

The situation is likely to get worse. According to the Ministry of Health, Manaus is the only municipality in the Amazonas state which has ICUs. In February of this year the city had 271 beds, with 61 percent occupancy, and out of these 177 belong to the Unified Health System (SUS). This means that if 10 percent of the population in the Amazonas state was infected and, among these, 10 percent developed severe symptoms and needed to be hospitalised, over 40,000 beds would be needed to treat everyone. There simply aren’t enough beds. 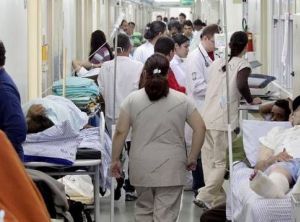 Infrastructure problems do not only affect the health sector. Between 22 and 24 March, the state had three power blackouts that affected mainly the metropolitan region of Manaus. The newly privatised concessionaire blamed the Tucuruí line, which connects the Amazonas region to the national system, but gave no details of what may have occurred. The likely cause is overload due to an increase in the number of people working from home.

To top it all off, the lack of water which is already severe in the poorest neighbourhoods of Manaus has become widespread. The utilities company says that without electricity, the water capture units stop working, but this is not a new problem in the city. While the government campaigns for everyone to wash their hands, thousands of people have no water coming out of their taps.

On 23 March, the governor of the state decreed the closure of all commercial establishments. Three days later a letter signed by 13 employers called for the suspension of the decree and the adoption of the fanciful policy of "vertical isolation", which in practice only saves the profits of large companies and does nothing to contain the virus. Given the total lack of appropriate conditions to fight the disease in the state, it is even more laughable to suggest that trading sites have "temperature checkpoints and rapid testing."

Industrial manufacturing, the main economic activity of the Amazonas, has seen factories closed since February due to a lack of inputs supplied by China. The bosses’ solution was to collectively give early holidays to workers, which is an attack on the basic right to paid holidays won by the working class.

At the time the President of the Union of Metallurgists of the Amazonas (Sindmetal-AM), who is also President of the state board of the PT, said that the collective holidays had been scheduled since last year and that it had nothing to do with the effects of the coronavirus in China. Last Monday, 30 March, another 30,000 workers from the Industrial District of Manaus went on collective holiday.

According to the union, the agreement with the factories was made to prevent the spread of coronavirus, but in practice it means that workers are forced to spend their holiday in isolation while the bosses keep their profits. If the actions of Sindmetal-AM in recent years are anything to go by, mass layoffs are expected very soon. The union did not agree to stop work even during the general strike called by the Unified Workers’ Central (CUT), to which it is affiliated, on 28 April 2017. Therefore, it is doubtful whether any concrete action will be taken. From 2015 to date, the Industrial Pole of Manaus has cut 57,000 jobs.

Since the beginning of the Manaus Free Trade Zone project in the 1960s, capitalism's promise to "develop" the Amazonas region has never materialised. On the one hand, large foreign industries have benefited from the low wages and tax incentives offered in the region for decades. On the other hand the urban workers, peasants, riverside and indigenous peoples of the Amazon have suffered, with the accelerated growth of poor suburbs close to the capital, the destruction of entire ecosystems, as in the case of the Balbina hydroelectric plant, and the constant pressure to abandon their traditional ways of life to join the underpaid workforce that is absorbed by the industry, trade and service sectors.

Abandoned to their own fate, old and new inhabitants are forced to live with scarce basic infrastructure, waste many hours a day commuting on an inefficient public transport system, and live constantly frightened by criminal gangs, which use the same routes that cross the state to transport drugs and reach the Southeast and Europe. Dengue, tuberculosis and other infectious diseases are endemic in the state. The pandemic is only adding more suffering to this situation.

Despite the defeatist actions of the left-wing leaders in the Amazonas, the state has a history of popular struggles and revolts that come from the Empire: the Cabanagem Revolution is an example of resistance against the military dictatorship. Anger against the system, which could be seen in 2013 with 100,000 people on the streets of the capital, needs to be transformed into revolutionary class consciousness to overthrow the Bolsonaro government and mobilise all the necessary resources to fight against the coronavirus.