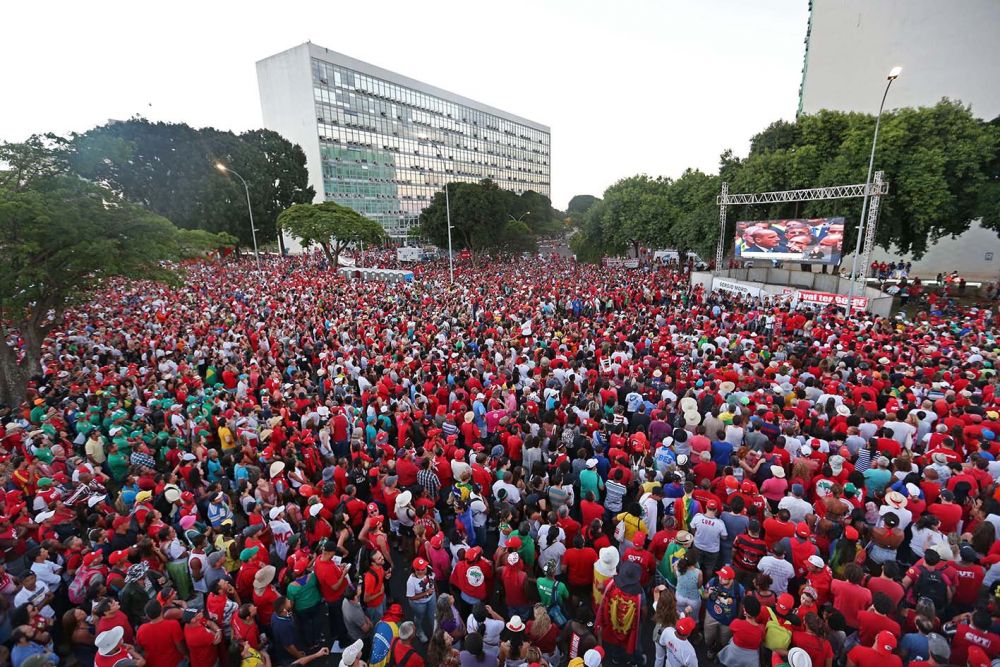 Dramatic events unfolded in Brazil last night as the Congress [Parliament] voted to impeach President Dilma Rousseff. The whole country was following the process, divided into two camps, the reactionary pro-impeachment bourgeois and petit bourgeois, and the anti-impeachment workers and youth.

Such were the passions on both sides that the authorities had to build a temporary two metre-high, one kilometer-long metal fence to keep apart the thousands of pro- and anti-impeachment demonstrators outside the Congress building in Brasilia.

Parliament voted by a big majority, 367 for impeachment and 137 against, more than the two-thirds required to start proceedings against Dilma. She is accused of manipulating government accounts. In reality what she did is not criminal. She did what all Presidents have done in the past, i.e. delaying payments and procuring bank loans to keep government finances functioning. In her absences on international trips her Vice-President also signed such documents, but he is not up for impeachment. This reveals that it is just an excuse to proceed against her, as the bourgeois politicians have decided they want her removal. Most of the politicians moving against her are themselves being investigated for corruption, so the farce is complete!

The next step is that the 81-member Senate must vote on the same question next month. The Senate can block proceedings, but all the indications are that it will not and will confirm the Congress vote. Once the Senate votes to proceed, Dilma will be suspended as President and a Senate trial will begin, which can last up to six months. In the interim period she would be replaced by Michel Temer, the Vice-President. After the six-month period a vote would be taken and if a two-thirds majority finds her guilty she wil be permanently removed from office and replaced by Temer until new elections take place in 2018. Temer is from the PMDB, a bourgeois partner in the government coalition.

The bourgeois parties are exploiting the fact that Dilma had become an unpopular leader in the midst of a severe economic crisis. She is in no way as popular as Lula was when he first came into office. Then Brazil was booming on the back of Chinese expansion. Brazilian capitalism could afford to make concessions. For example, between 2003 and 2015 eighty-five percent of labour contracts granted wage increases above the rate of inflation. There was what we would call a “feel-good” factor that the PT leaders based themselves on. But now there is a severe crisis and such conquests are no longer possible.

Last night as I followed the parliamentary proceedings being broadcast live, I posted on Facebook my comments, and I reproduce them here to give a taste of the mood in the country. 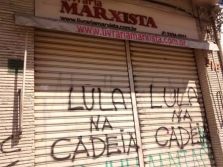 1) There is a tense climate in Brazil. Parliament is about to vote on the impeachment of Dilma. The bourgeois are on the offensive and cannot tolerate even this moderate centre-left government. But in the process they are destabilising Brazilian society. Revolution and counter-revolution are marching together. While all major imperialist powers are of the opinion that the Brazilian ruling class is making a big mistake, unleashing forces from below, the bourgeois here are in a hurry to go onto the offensive, as they feel the pressure of the crisis of world capitalism. After years of boom and concessions to the working class, they now have the worst recession since the 1930s. In all this, the working class and youth will emerge as a powerful force. Decades of economic growth have created a working class that is much bigger and more powerful and now the bourgeoisie has a huge problem: how do you govern against such a class? (In these conditions the comrades of the IMT in Brazil have been targeted by right wing reactinaries.)

2) I am watching the Brazilian parliament voting on the impeachment of Dilma. So far 186 MPs have voted for impeachment and 50 against. It is going to take several hours as each MP gives a speech explaining their vote. We are seeing the reactionary bourgeois parties of Brazil, including parties which were in the government with the PT, expressing their hatred for the Brazilian labour movement. They are attacking the PT not for its recent austerity policies but for its reforms of the past. Some have referred to the CUT trade union confederation as an unacceptable force. They are on the warpath. It is a real spectacle what is going on in the Brazilian parliament. The speaker of Parliament chairing the vote, Eduardo Cunha of the PMDB, is under investigation for corruption. Also, 342 of the 503 MPs are either accused or under investigation for corruption and yet they are participating in this farce. And millions are watching while tens of thousands are on the streets. Let them remove Dilma and form their government. It will be a rabid anti-worker government and will provoke a worker-backlash which will clarify the real balance of class forces in this country. And any government formed after this will be seen as illegitimate by the workers and youth. Brazil will become ungovernable. In the Sao Paulo region alone 5000 factories have closed, provoking a significant rise in unemployment. Society is being polarized like never before. A new period is opening up.

3) The problem is that the PT MPs are opposing impeachment on the basis of appeals for the defence of the Constitution and democracy. They should be using this opportunity to speak to the millions of Brazilian workers and poor to raise the class issues, i.e. what this right wing is preparing, and mobilise the masses. But they are incapable of doing that because they are responsible for austerity in the recent period. (So far e vote is 224 for impeachment and 77 against. Looks very much like impeachment will be approved.)

4) The rich are a particularly disgusting breed. With the problems of billions of humans, to observe the rich with their lavish lifestyles is nauseating, but the rich in countries like Brazil and their political representatives, careerists and social climbers, are even more nauseating.

5) The level of these Brazilian bourgeois MPs is incredible. I have lost count of the number of MPs who opened their speeches with the words "For my family, for my children, for my friends and for my dear hometown..." and then proceeded to vote for the impeachment of Dilma. Some add "for the Evangelists and all Christians..." One made an interesting point, "We will take back our economy..." which means we will take back direct control of things and won't have to govern through these people of the PT. Every time an MP declares in favour of impeachment the mass of reactionary MPs standing around them start cheering like the public at a boxing ring. They are like pigs who can sense they are about to get their snouts back in the trough. They are hungry and cannot wait. (The votes for impeachment now are 334. They need 8 more and are in a frenzy.)

6) We have impeachment! And the others are cheering like football hooligans. Workers and especially the working class youth will be disgusted at this spectacle. 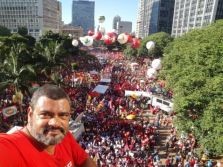 7) The reactionary right-wing protestors are cheering on the streets. The left is disappointed but also angry. Two camps were on the streets of Brazilian cities today, those who belong to the same camp as the escualidos and right-wing oligarchy in Venezuela, those who believe in their God-given right to live at the expense of the workers, peasants and poor, and those who represent those same workers. As I wrote earlier, revolution and counter-revolution were on the streets of Brazil today. Parliament does not represent the people. A period of intense class struggle is being prepared. Marxism will find fertile ground in this situation.

8) A few MPs stood out with a clearer left critique. Among these were the PSOL MPs, a few PT MPs, the PCdoB. They denounced this as the beginning of an attack on workers' rights. The PCdoB explained this is just the beginning of the struggle. These are the few MPs who reflected the mood of the real living forces of the workers and youth of Brazil.

9) The Esquerda Marxista, the Marxist Left, the IMT in Brazil, have come out consistently against impeachment, but without supporting the government and have been intervening in the anti-impeachment movement. They have explained the responsibility of the PT leaders in governing with the bourgeois parties, who have now voted for impeachment, and in carrying out austerity in the recent period.

The latest news today is that the CUT, other unions, the MST (peasants), and other workers´ organisations, gathered in the “Brasil Popular” [People´s Brazil] and “Povo Sem Medo” [a front of which the Esquerda Marxista is a component], have issued a statement saying that they “will not recognise the legitimacy of any Temer-led government, the product of an institutional coup”, and “will struggle against such an illegitimate government, and will fight every measure it adopts against us, against wage levels and jobs, social reforms, and workers´rights won through bitter struggle and will defend democracy and national sovereignty.”

This confirms what I wrote last night. Two mutually hostile camps are lining up for battle, the workers, the unemployed, the landless peasants, the youth on one side and the bourgeoisie and all that is reactionary on the other side. The Brazilian ruling class will live to regret this unleashing of class forces from below.

Some see this as the manoeuvres of a ruling class gone mad. But there is a logic in this madness. The crisis of world capitalism is intensifying the global struggle for markets. The Brazilian bourgeois want to take back everything they have been forced to concede in the past. But in so doing, they are unleashing revolutionary forces from below.