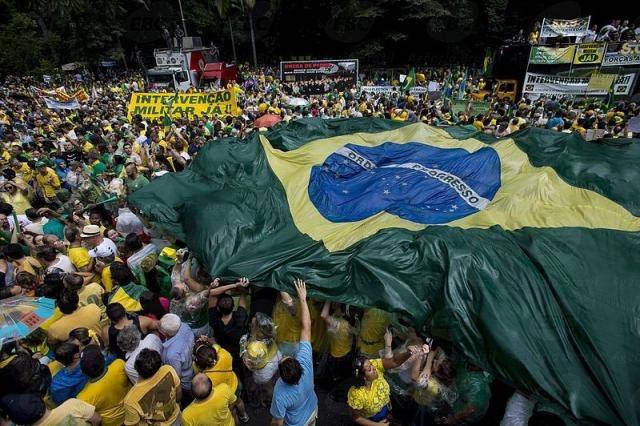 There have been fresh revelations about the corruption coursing through the veins of Brazilian politics. An investigation into what has become known as ‘Operation Car Wash’ (Lava Jato) - a money laundering and bribery scheme with links to state-owned oil company Petrobras and a number of politicians - has been ongoing since 2014. As recently as last week, this investigation has produced a fresh wave of allegations against even more members of Congress from all political parties. The money-grubbing filth with which the Brazilian state is spattered is clear for all to see.

I discussed this situation with Fernando Leal, who is a member of Esquerda Marxista (the IMT in Brazil) and a unionised worker at Petrobras in Rio de Janeiro. I asked him what he thought about ‘Operation Car Wash’.

“Initially the accusations were targeted mostly at members of the PT [the formerly governing Workers’ Party of Lula and Dilma Rousseff]” he told me. “There’s no doubt the PT is corrupt - it doesn’t act in the interests of workers, despite its name and despite the fact that many workers do still support it. But the right-wing parties, who are equally guilty of corruption, cynically tried to use this investigation to attack the PT and, by extension, the workers who support it. This was all part of the campaign to impeach Dilma Rousseff [the former president and member of the PT].

“But the recent revelations include members of all political parties. This was inevitable because the investigation process has taken on a life of its own and escaped the control of the right-wing parties.

“But I also think the Brazilian ruling class has decided that its political representatives are becoming too expensive. The capitalists want to cut down on the cost of bribes paid to public officials, and in many cases to replace the officials with new ones. They’re using the Car Wash scandal to make politics cheaper for them to control by removing the most corrupt politicians - that’s why they’re allowing this police and judicial investigation to continue, and why they’re publishing fresh allegations in their newspapers and media.”

I discussed this point further with Fernando, and we agreed that this is a risky strategy for the ruling class to pursue. Whilst the capitalists might achieve their desired aim of reducing the price of corrupt politicians, it is likely to be at the cost of undermining public trust in the political system as a whole. Fernando explained that this is being reflected in low voter turnout and disgust with politics in its entirety, especially among young people.

I asked Fernando what will be the likely impact of all this on next year’s presidential election.

“The scandal does not seem to have dented the popularity of Lula [a former president from the PT who is seeking re-election in 2018]” he said. “A poll on 10 April put Lula at 44%, with the next closest contender being on 11%. So if there was an election today, then Lula would win.

“But a lot can change between now and next year, so nothing is guaranteed. Above all, we’ll have to see what happens on 28 April and beyond.”

28 April this year will witness a general strike in Brazil, the first in a generation. Fernando explained that this follows two days of action on 15 March and 31 March, which have seen massive demonstrations all over the country, local assemblies of teachers and transport workers, and wildcat strikes by bus and metro workers in Sao Paulo.

This movement has been sparked by the attacks of the Temer government on the working class and the youth. Privatisation is creeping through Petrobras (the oil company), Electrobras (the electric company), the postal service and transport infrastructure like airports, ports and railways. There are also dramatic proposed changes to labour laws, which are putting outsourcing and casualisation on the order of the day everywhere, with corresponding cuts to the security and standard of living of workers.

Walking around Rio with Fernando, it’s possible to see the effect of these cuts. He told me that social problems in the city and around the country were on the rise. Homelessness is increasing exponentially, and unemployment now stands at 13%, with youth unemployment at 26%.

“But,” Fernando tells me, “the biggest attack is over the question of pensions. Right now the only requirement to get a pension is that you’ve been working for 35 years. So if you start work at 16, you can retire at 51. Now the Temer government wants to implement a minimum pension age of 65 - a huge attack on the working class.”

These attacks are the driving force behind the 28 April general strike, which is being prepared by a coalition of trade union federations. Unlike the wildcat strikes of 15 March, there has been much more time to prepare this action, and so a larger turnout over a much broader geographical area and spectrum of sectors is expected. The PT is also supporting the strike action although, as Fernando told me, the PT’s involvement will really only serve to hold the movement back.

“The PT is not interested in taking power at the moment,” he said. “I think Lula and the PT secretly want the pension reform to be passed by the government, so that Temer becomes even more unpopular and the PT can use this as a springboard to win the next election, after which Lula would treat the pension reform as a fait accompli and refuse to repeal it.”

This is the kind of cynical manoeuvre many workers have come to expect from the PT leaders, but it’s not guaranteed to work. The government is not in a strong position, with Temer having taking power through the congressional manoeuvre that impeached Dilma Rousseff. The general strike is a powerful weapon in the hands of the working class which, if properly wielded as part of a coordinated strategy stretching beyond 28 April, could bring down the government before the 2018 elections.

The problem is the lack of strategy coming from the leadership of the trade union federations calling the strike. But even this lack of direction from the top might not be enough to hold the movement back. The events of 15 March, 31 March and 28 April can build up a momentum of their own. The working class can gain a certain confidence in its own power and could push its leaders into developing a proper strategy for bringing down the government. Either that or the movement could push these leaders out altogether if they stand in its way. 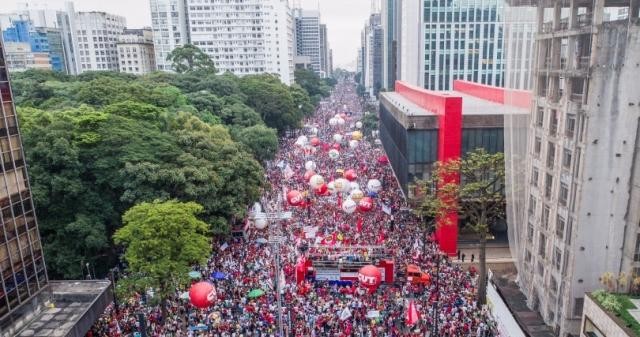 The slogan of the Left in Brazil at the moment is ‘Fora Temer!’ (‘Temer Out!’). Fernando is convinced that this should be just the first step in the strategy of the Left.

“These attacks on pensions and workers’ rights are not happening in a vacuum”, he explained. “The Brazilian economy is in difficulty now because China is importing far fewer commodities from countries like Brazil. This is because Europe and the USA, in turn, are importing fewer consumer goods from China.

“The point is that Brazil is suffering from the global crisis of capitalism. It is not this or that government or politician that is the cause - it is the system as a whole. We need to get Temer out, but we also need to get capitalism out.”

Fernando explained that this is why he’s part of Esquerda Marxista. The IMT in Brazil fights for a complete break with capitalism, for an end to exploitation and oppression, and for the socialist transformation of society. As the anti-Temer, anti-system mood in Brazil continues to develop, there’s an urgency and an excitement to the work of building a genuinely revolutionary organisation like this.

Faced with corruption and crisis in the ruling class, and a general strike and a wave of militancy in the working class, Fernando and the comrades of Esquerda Marxista are determined and optimistic about the fight for socialism. Marxists everywhere can take inspiration from their struggle for a better world.