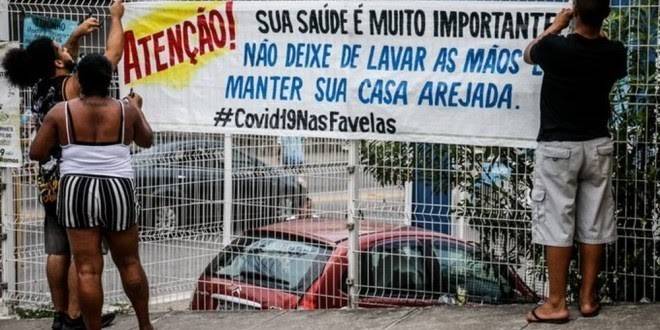 Coronavirus has arrived in the immense favelas of Rio de Janeiro. The number of cases of contaminated slum dwellers is difficult to know, because counting and recording have been done based on the officially recognized neighbourhoods, which do not cover the slums.

These are spaces with high demographic density (many people per square metre), precarious dwellings with only a few and crowded rooms. Residents cannot help being very close to each other as they share small spaces, damp shacks with poor ventilation. In the favelas, the lack of health equipment is worse than anywhere else: there is no sewage network, basic sanitation or drinking water.

These conditions will lead to an alarming rate of coronavirus proliferation in Rio de Janeiro, Baixada Fluminense, Niterói and São Gonçalo. Such conditions will be catalysts for the accelerated spread of the virus, which can result in many deaths, due to poor sanitary conditions, as well as the bad condition of the Unified Health System (SUS), which already struggled to meet demand - even before the coronavirus pandemic - and which is bound to collapse as coronavirus contamination grows.

There are other areas in an extremely critical situation, such as the Favela da Coruja, in São Gonçalo, which do not have access to soaps and other hygiene and cleaning products, that is, they do not have the minimum conditions to protect themselves.

Here are some reports from residents:

"At home we only have what we’re using, there isn’t much left. We’re already running out of detergent too. Once we use it all up, that’s it. We can’t get more."

"When I go shopping, I buy four bars of soap. It's not enough to last the whole month. When we don't have any soap left, we wash our hands with water only, and that’s it.”

"We’ve been without water for 20 days, some streets even longer than that. They tell us to wash our hands, but how can we wash our hands and be safe if there's no water? There's no support from the city council. I'm scared to death of this coronavirus, I really fear what might happen here"

"There is a part in the [Alemão] complex, in the highest part of the favela, where poverty is frightening. Dude, they're going to die, there's nothing there. I went there to help. I was horrified because they haven’t got any soap in the house, not even to shower."

Access to water is a basic human right. The State Water and Sewage Company of Rio de Janeiro (CEDAE) is in charge of the water supply, which has been contaminated with geosmin bacteria. As if this was not bad enough, the favelas barely have access to treated water and basic sanitation, many favelas have no water at all, residents have nothing left in their water cans. Thus, they are also denied the means to take action and follow the basic measures of protection against the virus: washing hands, bathing, and sanitising the house (which can also put people at risk).

Bolsonaro and his minions serve the big entrepreneurs and are against the working class / Image Antonio Cruz, Agência Brasil

In Rio and in Baixada Fluminense, the abandonment by the state is so serious that the workers themselves are taking protective measures. They are driven by class solidarity between them and/or by the actions of bandits and militias. Drug traffickers from different factions have ordered curfews with loudspeakers (in cars and lamp posts) and are knocking on doors to warn people. Criminals tell residents that they are not allowed to circulate, and remind them that if they fail to comply, they can be punished with violence. In São Paulo, many of the huge gatherings promoted by “funk balls” – the so called "pancadões" – are still on. These are events where a great deal of drugs sales take place, so they are still being promoted to keep the drug dealers active and please corrupt police officers. This is also happening in some favelas in Rio, but it doesn’t make the newspapers’ headlines because they want to give drug trafficking and the militias a "positive image".

This is the harsh reality facing the working class. The class that produces everything on a regular basis lacks the bare minimum to survive. Now, as they have to be in quarantine because of a deadly disease, capitalism punishes them even more.

These living conditions are an indisputable proof of capitalism failing in the cities. The precarious housing conditions and healthcare provision in the favelas result from the extreme social inequality produced by late, accelerated and disorderly urbanisation.

The solution of housing issues can only be achieved through socialism. Therefore, we support the movement to overthrow Bolsonaro and his minions, who are at the service of the big entrepreneurs and against the working class. We fight for socialism and for a better society. A society free of oppression and in which everyone has access to what they produce and can live with dignity.

Bolsonaro out! For a government of workers without bosses, without generals!