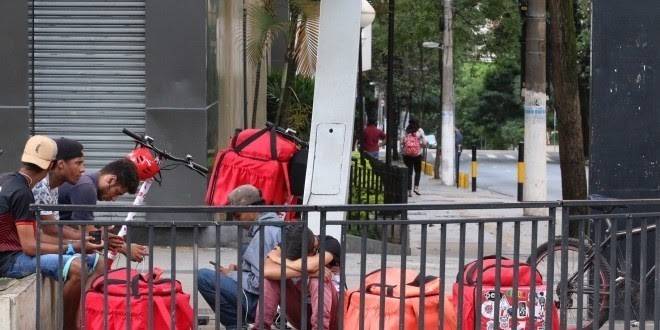 At the end of 2019, the Brazilian Institute of Geography and Statistics (IBGE) announced a drop in unemployment from 12.3 percent in 2018 to 11.9 percent in 2019, that is, a 0.4 percent reduction. This change is not only insignificant, it’s also distorted: over the same period the number of discouraged workers, who gave up looking for work, increased by 1.4 percent. Informal workers – those without any kind of contract or self-employed – increased significantly, reaching a record number of 41 percent of workers who have some occupation. In practice, this means that unemployment has not decreased. On the contrary, it has led to discouragement or dragged workers into a precarious work situation, in which they are deprived of labour and social security protection, and with very low remuneration.

A high unemployment rate, combined with increased informality, is the result of the deepening economic crisis and attacks by employers and governments against workers. The latest labour and social security reforms are recent and direct examples of how much the proletariat's living and working conditions have deteriorated. The figures only confirm what can be easily verified by anyone who is paying attention. Just look at the huge increase in the number of delivery and app drivers, or street vendors scattered around the corners and on public transport in big cities. This is a picture of a real working-class struggle for survival.

The economic crisis, catalysed by the coronavirus pandemic, strongly affects the working class on a global scale. However, the situation of informal workers is particularly dramatic. "If I don't die from this virus, I'm starving to death": that's what José Maria, a 65-year-old street vendor, says. This feeling is shared by Daniel Aprigio, 27, a food app delivery man, who states: "I don't even know if I'm afraid of getting sick or going out of work". These outbursts are the concrete expression of the anguish of workers, who feel squeezed between the increasingly deplorable economic picture and the risk of being contaminated by the coronavirus.

What does Bolsonaro offer?

To deal with the serious situation informal workers are facing, Bolsonaro proposes aid of R$200 over a period of three months. That is a death policy. Nobody can survive on this amount. On the other hand, Bolsonaro presents measures that favour big business, such as reducing working hours and salary, maintaining the payment of the public debt – R$ 1.038 trillion in interest, amortization and debt in 2019 – and the profits made by the banks. To give you an idea, private banks – Itaú, Bradesco and Santander – made a net profit of more than R$ 65 billion last year. And what do the banks and government do? They only allow workers to defer payment of some of their debts. This is the cruel expression of this system that sinks humanity into barbarism. The coronavirus pandemic graphically demonstrates the inability of an anarchic, profit-based economy to provide answers that guarantee the life of humanity as a whole. The proletariat, in the struggle for its existence, will surely find a way out and build a new society.