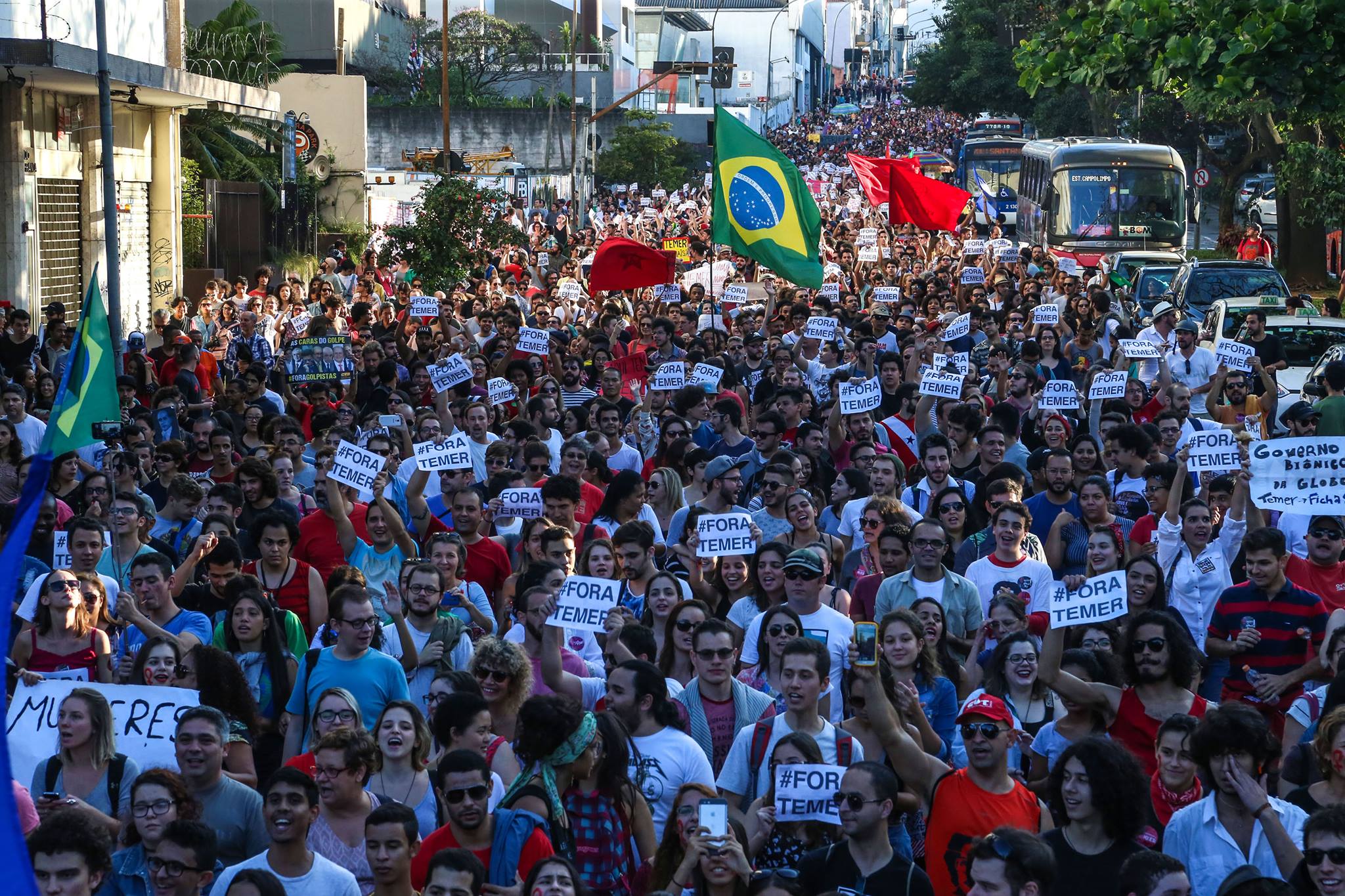 By 61 votes to 20, the rotten Brazilian Senate has approved the impeachment of Dilma and, consequently, her definitive removal from office. This is the final chapter in a process which was started in December 2015 by the former president of the Chamber of Deputies, Eduardo Cunha.

Dilma Rousseff - Photo: Agência Brasil CC BY 3.0 brThe Marxist Left  has consistently explained how the national bourgeoisie in the beginning was against the removal of Dilma, but was gradually forced to join the impeachment camp, hostage to the pressure of its own representatives in parliament. We emphasized how the vote in Congress laid bare the rottenness of bourgeois politicians. We explained that the imperialist bourgeoisie never agreed with this adventure. We positioned ourselves against the impeachment orchestrated by the right, but without defending the indefensible Dilma government, which was a government carrying out attacks on the working class. (See the political resolution of the 5th Congress of the Marxist Left of April 24, 2016:.

The truth is that Lula, Dilma and the PT had de facto "thrown in the towel" after the approval of impeachment proceedings by the Congress [Parliament] in April. After a May Day of concerts and parties, at the June 10 "Temer Out" demonstration, Lula said he could not call for a general strike because he does not "work in a factory and pensioners do not go on strike" and also that he could not call for "Temer Out" because it "would not look good." This was like pouring a bucket of cold water over the [anti-impeachment] protesters.

The picture is now completed with last week's letter by Dilma Rousseff, "Message to the Senate and to the Brazilian people", which was an attempt to convince the Senators not to vote for impeachment, instead proposing a pact. The letter says, "I am convinced of the need of, and give my full support to, the call for a referendum in order to consult the population on early elections," and suggests a "national pact based on free and direct elections" in order to strengthen "the values ​​of the democratic rule of law."

The submission of Lula, Rousseff and the PT to the system is complete. They are more afraid of the masses on the streets, than they are of the right-wing attacks. In the forthcoming municipal elections the PT is continuing with the disastrous policy of class collaboration which led to the impeachment in the first place. In hundreds of municipalities across the country the PT is in alliances with the PMDB [Témer’s party] and even the PSDB and DEM [which were in opposition to the PT government and the most rabid advocates of impeachment] in hundreds of municipalities throughout Brazil.

Photo: Wilson Dias - Photo: Agência Brasil CC BY 3.0 brThe political crisis in the country, which threatens the regime born of the 1988 Constitution, is taking place against the backdrop of the deepening economic crisis.

The Temer government has been trying to present an optimistic outlook. However, the reality is shown by the draft budget it has sent to Congress with a primary deficit of R$139 billion [US$42 bn] for 2017.

Even the Minister of Planning, Dyogo Oliveria, forecasts that public debt will exceed 70% of GDP already this year. Next year's budget adds to this year's deficit of R$170 billion [US$52bn]. Hence the urgency of adjustment measures to cover the shortfall, guarantee payment of the fraudulent debt and regain market confidence.

But GDP in 2016 will end with a contraction of -3.2% (Focus Bulletin, 22/08). What remains in fact is merely a promise for 2017, with the government's perspective of growth of 1.6%. Industrial production, despite a growth of 1.1% in June compared to May, when compared with the year-on-year figure of June 2015 has fallen by 6%. And in the last 12 months, the cumulative decline has been -9.8%. Workers feel the effects of the growth of unemployment which reached 11.3% in the second quarter. There are now over 12 million unemployed!

And the Temer government?

Having completed the impeachment process, the weak government of Temer will no longer have the excuse of the interim character of its office for its lack of action. It will have to act fast in carrying out its task, i.e. to implement the necessary measures to lower the cost of labour.

However, the first months of life of this government have shown that this will not be an easy task. It has already faced mass demonstrations, it only has 13% of popular support and has been forced to retreat several times. The most recent example was the withdrawal from the agreement on renegotiation of the debt of the states to the Union, of the clause that prevented state governments from granting wage increases to civil servants and from hiring new ones for two years. Although the bill which has been passed as a whole represents an attack, the withdrawal of one clause - which before was considered "non-negotiable" - shows that the government has been forced to manoeuvre due to the weakness of its parliamentary base.

The bourgeoisie mistrusts the new government and is putting it under pressure. In an editorial of August 11, Estadão evaluates: "the Brazil which works and pays taxes placed in Temer and its competent economic team the strong hope that the irresponsibility of Dilma Rousseff would quickly be overcome, but so far it has been faced with an erratic leadership - sometimes promising the rigidity needed to overcome the crisis, but then making concessions that reveal submission to parochial and corporate interests."

To make matters worse, in relation to the Car Wash [Lava Jato] corruption scandal, Temer appears as a key player in a "donation" of R$10 million from construction company Odebrecht to his own party, the PMDB . The Foreign Minister, José Serra, is reported to have received R$23 million from the construction company during the presidential campaign of 2010, while the Minister of Governance, Eliseu Padilha, is said to have received R $ 4 million.

The investigations are beginning to affect the Judiciary and are causing divisions within its ranks. It was what we saw after the leak of the preliminary statement of the former Chairman of the construction company OAS, involving the Minister Dias Tofoli, by the Supreme Court. After the case, Gilmar Mendes, also of the Supreme Court, and quite close to the PSDB, issued statements against the Attorney General's Office. He said: "We're coming close to the dangerous terrain of totalitarian delusion. It seems to me that [the Car Wash prosecutors] are possessed of a kind of absolutist theory of fighting crime at any price."

All the facts prove our analysis of the political objectives of Car Wash, which, in addition to seeking the demoralization of the Left as a whole and a strengthening of the judiciary with a Bonapartist role in the attacks on the working class and social movements, it also aims to portray a "general cleansing" of the state institutions and promote a renewal of the bourgeois representative framework, thus seeking to save the system from popular anger.

Under pressure from its masters, the Temer government must now go on the offensive. In his speech at the meeting of Ministers after the impeachment, Temer demanded total loyalty of the "government base," criticizing the vote of the President of the Senate, Renan Calheiros, and 16 other Senators from the allied parties, who voted against the loss of of political rights of Dilma. In an address to the nation Temer said, "To ensure the payment of pensions, we have to reform social security. Without reform, in a few years the government will not be able to pay pensioners." On labour rights he said, "We have to modernise labour laws to ensure the existing jobs and create new ones."

What he announced are more attacks: a pension reform, a labour reform, as well as a tax reform that will follow them. In reality they are counter-reforms aimed at weakening labour rights, increasing the age of retirement and increasing taxes on the shoulders of workers. These policies come together with cuts in social spending such as healthcare, education, housing, etc., with a ceiling imposed on public spending in bill PEC241. To all this we have to add privatisations, which will accelerate in the second half of the year.

To carry out this war against the working class, the bourgeoisie will have to deal with the resistance of the masses and therefore is strengthening repressive measures and the criminalization of social movements. It is using the repressive apparatus and the legal instruments at its disposal, such as the Anti-Terrorism Act, shamefully proposed and sanctioned by the Dilma government.

The other side of the coin

But all these attempts to remove rights, and criminalize and repress social struggles, have their limits. The working class is not and does not feel defeated. There are strikes and mobilizations going on by different sectors for economic demands or against layoffs. The threat of layoffs at the Mercedes plant in the ABC, for example, triggered a five day strike that forced the company to retreat. The very strong strike of municipal workers of Florianopolis which forced the mayor to withdraw the attack on pensions is yet another example.

The difficulty in unifying these struggles, the difficulties of the "Temer Out" demonstrations to to attract the masses, are the direct responsibility of the leadership of the workers' organisations and their treacherous policies. The leadership of the CUT [trade union confederation] has lost its ability to mobilize after coming out in defence of Rousseff and Lula. They talk about the preparation of a general strike but are unable to build it at the rank and file level. The truth is that the working class is not willing to come out on strike and onto the streets to defend the return of those who betrayed them. Even if the workers do not support the Temer government, the labour movement and the masses lack a political perspective to unblock the situation.

But Brazil is part of the global political situation of instability and volatility. June 2013, the mass strikes of 2014 and 2015, the occupations of schools, and even the massive demonstrations against impeachment in April and May, as well as demonstrations against Temer after the approval of impeachment, in spite of the inability of the leadership of the CUT, PT and MST, show that there is so much willingness to fight.

In the elections and in the demonstrations, the struggle continues

The whole situation will set its mark on the electoral process. The general trend follows the phenomena seen in the 2012 and 2014 elections, an increase of blank votes, spoilt ballots and abstentions. This is due the political bankruptcy of the PT, and the widespread mistrust in the state institutions and bourgeois politicians.

At the same time, the Party of Socialism and Freedom, PSOL, can achieve good results in important political centres. Opinion polls indicate it will come first in Porto Alegre, Cuiaba, Belem and Sorocaba, second in Rio de Janeiro, and third in Sao Paulo. This is an indication that wide layers of the population are seeking alternatives to the left.

The Marxist Left is participating in the election campaign in alliance with the PSOL, with anti-system candidates, and is also present on the streets, in the demonstrations and the mobilisations of the youth and workers, with our analysis and positions, reaffirming as our central slogans for the current situation:

Out with Temer and the National Congress!

For a National People’s Constituent Assembly!

For a workers' government!