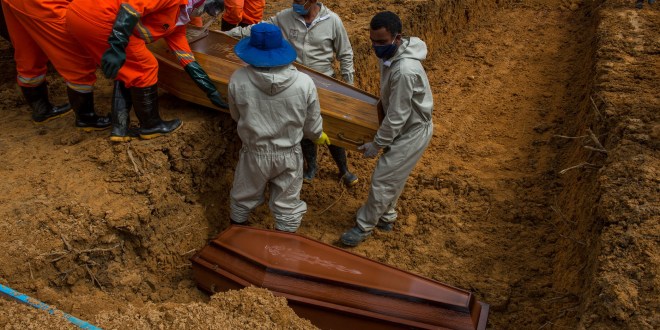 Brazil is beating records for the number of daily deaths due to COVID-19, and at the time of writing, the country has exceeded 260,000 casualties. Added to this is the collapse of the country’s health system, with the occupation of beds exceeding 80 percent of capacity in 16 states and the Federal District, with nine states exceeding 90 percent capacity. Read the original in Portuguese, originally published 4 March.

When talking about the seriousness of the situation, pulmonologist Margareth Dalcolmo, from the Oswaldo Cruz Foundation (FioCruz), said that “we will have the saddest March of our lives”. Faced with this situation, Bolsonaro responded by saying: “enough of this complaining and me-me-me attitude. How long are you going to cry about it?”

The data is alarming. Brazil has again overtaken the United States in the average of new daily deaths per million inhabitants, reaching 6.3. The ICU capacity is in a state of total collapse. Among the states with a high capacity rate are Santa Catarina (99 percent), Rondônia (97 percent), Ceará (93 percent), Pernambuco (93 percent), Acre (92 percent), Amazonas (92 percent), Paraná (92 percent), Rio Grande do Norte (91 percent) and the Federal District (91 percent). In these states, not only are COVID-19 victims who need hospitalisation dying, but also other emergency cases, such as victims of car accidents etc.

Bolsonaro tried to present himself as taking some action by reporting the miserable numbers of vaccine purchases in the face of the immense number of the dead. What he did not talk about was the number of opportunities that Brazil has already missed to acquire new doses. In February, for example, cities like Rio de Janeiro, Porto Alegre Salvador, Cuiabá and Curitiba suspended vaccinations due to a lack of doses. Recently, Gonzalo Vecina Neto, a professor at the Faculty of Public Health University of São Paulo told BBC Brasil:

“Brazil would be able to have a much greater supply of vaccines if we had done what other countries did, such as, for example, Chile. Today Chile has three doses of vaccines per inhabitant, but they started buying the vaccine in September. We did not start buying vaccines early. The federal government did not make any investment.”

When Bolsonaro promises any kind of real initiative to acquire new doses, it is mere demagogy. In 2020, the Bolsonaro government stopped using the R$80 billion available to contain the progression of the pandemic in the country. How many vaccines, ICUs, respirators and even oxygen would we have available if this money was used? Even so, any small actions are the result of pressure from below, from those who suffer from the disease, from the loss of friends and family, and demand a response from the government. On the other hand, a section of the bourgeoisie fears a social explosion, and is applying pressure on the government to take action.

But why did Bolsonaro say what he said? It’s not that he cares about the workers, he is acting in defence of his own class: the bourgeoisie. His declaration is a response to the main demand that arises at this critical moment, as the pandemic advances in the country: the need for a lockdown. This will directly impact the bosses’ profits.

When experts and journalists say that a lockdown will affect the lives of the poorest, they forget to say that this is because the bosses will not bear the costs of closing industry and trade. The bourgeoisie press for “action”, but they do not accept a lockdown because this would hit the bosses in their pockets. Bolsonaro said in the same speech that “we’re going to combat the virus, but not in an ignorant, dumb, suicidal way”. What he did, in fact, was make a brief description of the government’s own performance during the pandemic.

Governors and mayors are with Bolsonaro

In the states, there is no shortage of governors speaking in defence of the population. We even hear phrases like “defence of life” and criticisms of the federal government. However, what all the governors and mayors of the country are doing is following the handbook of the President of the Republic. We should not be deceived when João Doria (PSDB) and his gang call for a “lockdown” that does not close schools, factories or churches. Doria went so far as to absurdly shoehorn churches into essential services, making it clear that he is committed not to those who attend services and masses, but to those who enrich themselves from these activities.

In Santa Catarina, Governor Carlos Moisés (PSL), approved a “lockdown” decree on weekends, which also makes a mockery of the population, because on weekdays the buses and terminals continue to be full, putting workers and students at risk of infection. State and municipal schools in SC remain open while the ICUs in the main cities are already collapsing. The decree does not even contain the requirement that public transport be expanded to alleviate crowding. On the contrary, the order is to reduce public transport, and leave the workers queuing outside in endless lines.

In states like Pernambuco, Mato Grosso, among others, apparently, the virus is dangerous only between the hours 9:00 pm and 5:00 am, just at the time when almost no one is on the streets.

The betrayal of the left leaders

The growing indignation does not only target the current rulers and representatives of the bourgeoisie. The “left” parties are also failing to take action. On 1 March, we published an article about the letter from various parties, unions, and workers organisation of Santa Catarina that presented a series of methods for confronting the pandemic, but did not address the responsibility of the organisations that signed the document:

“At no time do these organisations deal with their own role in the situation. They ignore their responsibility in the class struggle, sowing illusions in the actions by the government in the service of capital.”

And we point out:

“It is the obligation and responsibility of CUT SC and unions, that claim to be working class and socialist, to organise strikes, and a general strike in Santa Catarina”

The National Executive of PSOL met on 3 March and published the document: ‘PSOL presents 6 proposals to stop the tragedy in Brazil’, which follow the same line as SC's position. There is no real action by the working-class leadership to fight the pandemic with our class methods, and to preserve the lives of young people and workers. Some unions go as far as to ridicule asking the Public Prosecutor's Office for the judiciary to accept a lockdown.

In his column on Folha de S. Paulo, on 1 March, Guilherme Boulos (PSOL and homelessness activist) stated called for “an urgent meeting of leaders and parties in the progressive field” and called for a “spirit of national salvation”. He is almost sincere when he says that this unity “will not solve all the problems”. But the fact is that such unity will not solve any problems, because it is a proposal of unity with fractions of the bourgeoisie, who do not want to resolve the situation facing the working class.

Boulos, in the same article, also tries to defend the “left”:

“And the opposition? Well, the opposition fights as it can. It acts in parliament and local governments to reduce damage and save lives. It goes to court to stop illegalities. It makes noise on social networks to try to wake up those who still sleep. At this moment, it cannot summon crowds to the streets of Pindorama, precisely because of restrictions.”

The problem is that workers do not need directions that act to reduce damage, that rely on bourgeois justice or that make noise on social networks. They do not need leaders who cower and who do not summon crowds to the streets because of COVID-19 restrictions. There are no health restrictions for those facing public transport, as Boulos believes. There are no restrictions for those in factories, restaurants, or schools. Health restrictions are not the reality for thousands of workers who are losing loved ones. The only way to face the pandemic is with the entry of the working class onto the scene, stopping the country in a general strike. It is only the workers who can put in place a real lockdown. There is no other solution.

Reformists who want to leave it until 2022 to fight the Bolsonaro government at the polls are soiling their hands with the blood of thousands dying every day.

Brazil can become a breeding ground for new variants of the coronavirus, which are more contagious and lethal, if it continues to follow the path we have taken so far. Bolsonaro said he is willing to continue firmly, “with an open heart” on the path that has already cost 260,000 lives and can still claim thousands or millions more. We are talking about a government that must be overthrown now, we cannot afford to wait.