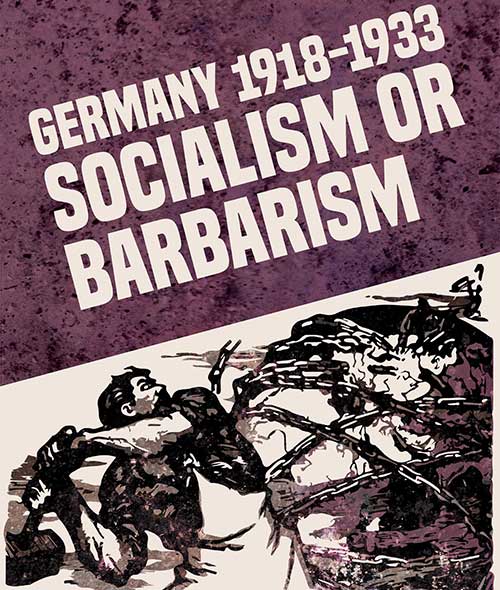 There was once a nanny-goat who said,
In my cradle someone sang to me:
“A strong man is coming.
He will set you free!”
The ox looked at her askance.
Then turning to the pig
He said:
“That will be the butcher.”

Behind Bertolt Brecht’s humour is always a serious point. The words are a swipe at the fascist propaganda, which attempted to reassure the middle classes while their throats were being cut. Brecht is not interested in lulling people to sleep, but wishes to awaken them. The task of this book is also to awaken an interest – in the German Revolution and its aftermath – and provide an understanding of what went on.

Bourgeois historians say there are no laws governing history. But that is not the case. There is causality in history, and it is our task to uncover its laws. Marx and Engels explained that societies, as with nature, evolve according to material laws, meaning that societies are not eternal, but arise, develop, and enter into crisis. Our fate is not determined. Men and women make history, but under conditions not of their own choosing. It is through experience that they learn and begin to take destiny into their own hands.

History deals with real relationships, rather than simply the high-sounding dramas of princes and states. And Marxism allows us to get our bearings, to navigate our way and make sense of the labyrinth of events.

As Marx explained, “philosophers have only interpreted the world in various ways. The point, however, is to change it.” (K. Marx, Theses on Feuerbach.) The author of this book belongs to the school of historical materialism. He approaches the German Revolution as a revolutionary, and sees no reason to conceal it. This allows him to lay bare the dynamics of the revolution, in which is reflected the movement of the masses, the rise and fall of parties, and the struggle between the classes.

Revolutions, like earthquakes, are rare occurrences. They arise from deep crises within society, where class contradictions have been strained to breaking point. We are living in a similar epoch today. The capitalist system worldwide is in an impasse and is preparing revolutionary explosions. For those who want to ‘make history’, there is no better preparation than to study revolutions and, above all, to learn the lessons. The 1918 German Revolution is a good place to start.

This book does not claim any spurious objectivity. It draws on the legacy of Marxism, especially its great teachers, who directly experienced and analysed these events. In that sense it cannot lay claim to ‘originality’. The early Congresses of the Communist International were a school, where all the main theoretical and tactical questions were thrashed out, with the direct participation of Lenin and Trotsky. In the face of persecution, Trotsky rescued all that was best from this astonishing period and went on to analyse the rise of fascism in the early 1930s, attempting to reach the ranks of the Communist workers.

He once wrote that, such was the heroism of the Spanish proletariat between 1931 and 1937, they could have carried out ten revolutions. The same could be said of the German proletariat between 1918 and 1923, but more so. Here we experience a roller coaster ride of workers’ and soldiers’ councils, mutinies, general strikes, uprisings, red armies, soviet republics, coups and class battles on an unprecedented scale.

The German revolution of 1918 placed power into the hands of the working class, but they lost it. The German proletariat had more chances to take power than any other in the world. Its failure to do so lead to the most ghastly and brutal of fascist reactions. This was nothing to do with the will or determination of the working class to fight, which was exemplary, but the criminal role of its leaders.

While some will be familiar with the facts of the 1918 November Revolution in Germany, few would be as familiar with the events of 1919 and later. 1919 was an apocalyptic year for capitalism. While the November Revolution was defeated, in 1919 the proletariat controlled swathes of Germany in heroic battles with the Freikorps and Reichswehr. Apart from fighting in Berlin, in the famous ‘Spartacist week’, there were street battles in most industrial districts; the Saxony Communists controlled part of the region in April 1919, fighting solidly for nine days; in Bavaria, the struggle lasted for two months, where Kurt Eisner, then Leviné, set up a Soviet Republic, but was overthrown by the Freikorps; there were revolts in Oldenburg and East Frisa; while Workers’ and Soldiers’ Councils in Rhine-Hesse, Oberhessen, the Palatinate, Hesse-Nassau, and Württemberg decided to break away and form a Hessian Soviet Republic. In March and April 1920, a regional Red Army conquered the Ruhr and drove out the government forces. A solid general strike defeated the Kapp Putsch in 1920 and the German workers could easily have taken power. In March 1921, there was an uprising in Hamburg. 1923 was another pinnacle, the year of revolutionary struggles and missed opportunities. The history of Germany, especially between 1918 and 1933, contains the richest of lessons, probably of any country in the world.

Since the time of Marx, the German labour movement had so many advantages. Friedrich Engels wrote that:

The German workers have for the moment been placed in the vanguard of the proletarian struggle. How long events will allow them to occupy this post of honour cannot be foretold. But let us hope that as long as they occupy it, they will fill it fittingly.

Engels stressed the need to treat socialism as a science, which must be studied. If the German workers progressed in this way, he explained:

[T]hey will occupy an honourable place in the battle line; and they will stand armed for battle when either unexpectedly grave trials or momentous events demand of them increased courage, increased determination and energy. (K. Marx and F. Engels, Collected Works,[1] pp. 631-632.)

Tragically, the leaders of German Social Democracy, supposedly the heirs of Marx and Engels, faced with voting for war credits in August 1914, capitulated and the banner of international socialism was soiled.

Although the British working class is the oldest in the world, it never reached the heights of the German movement in terms of theory or organisation. The British revolutionary traditions pale in comparison. Germany stands out as displaying the greatest potential for success, but also displaying the greatest tragedy. After all, the German Social Democracy was the strongest in the world. It was prized by all. Similarly, the German Communist Party was once the most powerful in the world, outside of the Soviet Union. And yet, the working class was crushed under the iron heel of fascism.

Deservedly so, the Russian Revolution, the greatest event in history, has been the centre of attention and study for Marxists. The Bolsheviks, under Lenin and Trotsky, showed in practice how the working class could succeed in taking power and hold onto it. Rightfully, this is why we have examined the rich heritage of Bolshevism. Nevertheless, it would be no exaggeration to say that the defeat of the German Revolution of 1923 was as significant an event in the negative sense as the victory of the Russian Revolution of October 1917 was in the positive.

In many ways, however, the German Revolution has tended to be neglected. Much less attention has been paid to it than ought to be the case. The reason is probably to do with the fact that there is very little literature by comparison in the English language about this subject. Pierre Broué’s magnificent book provided a valuable contribution when it was released in English in 2006.

Unfortunately, the book ends in 1923. Trotsky’s writings on Germany between 1931 and 1933 are also invaluable and are available online. For the most part, the history of the period is scattered across different sources, many of the best in the German language, and therefore here we have one of the reasons for the present book.

If we want to be successful, then we need to prepare ourselves, and consciously strive to build the forces nationally and internationally that can change the course of history. The work in building up such an International has been systematically undertaken today by the International Marxist Tendency (IMT), which has loyally kept the ideas of genuine Marxism alive throughout these years. The IMT, which bases itself on the genuine traditions of Trotsky’s Fourth International, now operates in almost forty countries and on every continent.

The task of changing society falls to the new generation, which, first and foremost, has to prepare itself for the stormy events that confront us. This book is a modest contribution to this endeavour, as well as preserving a part of our revolutionary heritage.

The author first heard about the German Revolution from Ted Grant, who maintained the flame of genuine Marxism alive in the most difficult years. The author was proud to have known and worked with him. His ‘The Menace of Fascism’, written in 1948, will remain a classic.

This book would not have been possible but for the help and encouragement of a number of people. In particular, thanks are due to Alan Woods, who first suggested the idea of a book; Fred Weston for carefully going over the text; Hans-Gerd Öfinger and Marie Frederiksen for their valuable suggestions and comments; to Sue Norris and Aaron Kyereh-Mireku for proofreading; to Steve Jones for the glossary; and Jack Halinski-Fitzpatrick for laying out and seeing the final draft through to publication.

[1] Henceforth referred to as MECW.