Evo Morales and the Movement Towards Socialism party (MAS) got a resounding victory in the December 6th election in Bolivia. The crowds in the capital La Paz received Morales’ victory speech with shouts of “socialismo, socialismo”. 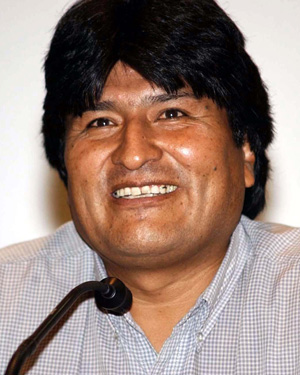 The official results show the extent of the victory: More than 64% (2.9 million) voted for Evo Morales on a 94% turn out. The MAS won in 6 Departments (La Paz, 80%; Oruro, 79%; Potosí, 78%; Cochabamba, 68%; Chuquisaca, 56%; and Tarija, 51%). In the working class stronghold of El Alto, the epicentre of the revolutionary movements in 2003 and 2005, 87% voted for Evo Morales. It is important to note that Tarija is part of the Media Luna (Eastern Crescent) provinces, where the reactionary opposition was able to mobilise mass support in the last few years. The right wing opposition, led by the hated former Cochabamba mayor Manfred Reyes, managed to win Santa Cruz (52% against the MAS 40%), and the sparsely populated Departments of Pando (51% to the MAS 44%) and Beni (53% against the MAS 37%).

Even in reactionary Santa Cruz, the MAS won 9 out of 15 provinces, and the opposition voting capital was surrounded by solid votes for the MAS in the working class areas outside of the city centre. The official campaign of the MAS here was very unpopular with MAS activists, as it was based on “appealing to the middle class” by watering down the message and even reaching alliances with former members of the reactionary UJC, which had organised the fascist gangs that participated in the attempted coup against Morales in September 2008. This policy was proven wrong as the vote for the MAS (which remained solid in the working class neighbours) actually went down in the capital city.

The vote for Morales is nearly double the number of votes he received in 2005 when he was first elected as president (with 53% and 1.5 million votes). At that time there were 3.6 million registered voted, but now the figure has expanded to 5.1 million. Hundreds of thousands of people, mainly from the urban and rural poor, who in the past did not even bother to register to vote, have been incorporated into the political struggle. This is the result of the cycle of struggle that has shaken Bolivia since the beginning of the century, of which the election of Evo Morales in 2005 was the electoral expression.

The hopes and aspirations of the masses of working people and peasants of Bolivia were expressed in this massive vote for Morales, whose campaign was based on the idea of getting a 2/3 majority in Parliament in order to move forward to socialism. Ramon Loayza, former head of the MAS group at the Constituent Assembly and left wing peasant leader, split from the MAS, criticising the government from the left. He hoped to gather the votes of those who think that Evo is not going fast enough in his programme of social transformation. But, by making an alliance with small business sectors in Santa Cruz, it was no longer clear whether his criticism was from the left or from the right. His vote was 0.33%. Clearly, the Bolivian masses consider the MAS as the political expression of their struggle for change.

Morales was very clear when he spoke to his supporters on election night. He said that the victory meant that: “we now have an enormous responsibility with Bolivia and with human kind, to deepen and accelerate the process of change in order to proclaim socialism.” One of his first moves was the beginning of the process to expropriate the landed estate of Branko Marinkovik, the wealthy landowner in Santa Cruz who was behind the attempted coup last year. However, others in the government and the MAS have already said that it is now time to conciliate with the opposition!

Evo Morales will be under intense pressure from the organised workers and peasants, who have ensured his increased victory, to deliver on all fundamental issues: land reform, jobs, nationalisation of natural resources, health care and education. That can only be done through the nationalisation of the main monopolies (national and foreign-owned), the banks and the expropriation of the land, so that the economy can be put under workers’ control to be planned in the benefit of the majority of Bolivians, rather than the 50 families, which have dominated the country for decades.

As seen in Honduras (and Bolivia itself) the oligarchy will not hesitate to resort to illegal, violent means to defend its economic and political domination. Any attempt to serve the people while leaving intact the power of the oligarchy is doomed to fail. If Evo Morales moves decisively to crush the oligarchy he will have the full support of the mass movement of workers and peasants, who represent the overwhelming majority of the population.