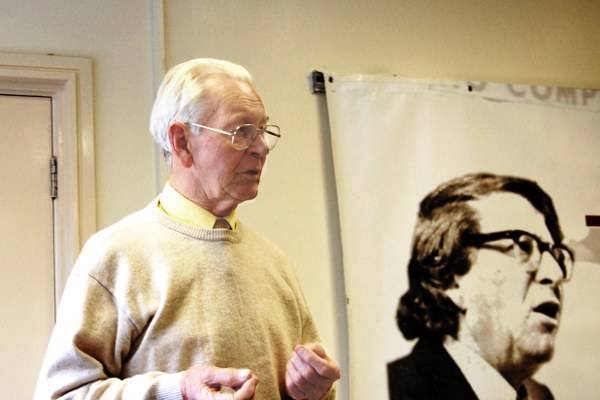 Comrade Bill Landles died this Saturday evening after a short illness, at the age of 95. Many of our older comrades will have fond memories of Bill. It somehow seemed that he’d always be there, with his sense of humour and his commitment to the ideas of Marxism. Bill was the last living link with the wartime pioneering work of the Workers' International League from where we trace the origins of Socialist Appeal and the International Marxist Tendency.

Bill was born in 1924 the day after the infamous Zinoviev letter was printed, during the first Labour Government. He lived his early years in Wallsend and Whitley Bay and had to take on big responsibilities supporting his Mam and his two younger brothers, after his Dad was killed by a mine in the early days of the war.

In 1943, as a young apprentice at the Reyrolles factory, he met with WIL comrades at work and began attending meetings of the Marxist Tendency. Given the wartime conditions, the discipline of the WIL was very fierce and Bill maintained a very strict attitude towards comrades being on time for meetings! Bill took part in the WIL’s public meetings in the Bigg Market in Newcastle, together with comrades such as Herbie Bell, Jack and Daisy Rawling, Ken Skethaway, Ann Keane and Heaton Lee. He often recalled the meeting of the group in 1944, which was addressed by Jock Haston the General Secretary of the WIL, who reported on the formation of the Revolutionary Communist Party. Jock, who had a strong Scottish accent, announced the new name of the organisation as the “Rrrrevolutionary Communist Parrrty”.

In 1944, Bill took part in the Tyneside Apprentices Strike as a leader of the Tyneside Apprentices Guild alongside Bill Davy. The strike was to oppose the Bevin Boys programme, which would have sent the apprentices down the mines to replace miners who had been called up. On one occasion, he travelled to Glasgow to speak at a meeting about the strike. Expecting a small meeting, he was shocked to be bundled on stage in front of a thousand Glaswegian workers!

In the aftermath of the strike, three WIL members, Heaton Lee, Ann Keane and Roy Tearse (the WIL’s Industrial Organiser) were arrested under the 1927 Trades Disputes Act for promoting the strike. Bill appeared a witness at the trial and his testimony was reported in the Socialist Appeal.

In 1945 Bill took on the role of Election Agent for the RCP candidate Herbie Bell in a Council Byelection. The RCP stood with the express intention of opposing the wartime coalition and fighting for a Labour government to come to power on a socialist programme. He recalls selling the Socialist Appeal newspapers door to door in the North Tyneside pit villages with Herbie Bell and reckons that he became a very fast runner, after escaping from various dogs!

Bill was called up to the air force the day he turned 21, and came out of his time as an apprentice. He maintained a love of gliding and flying and even took a flying lesson on his 80th birthday. Although he maintained that the best thing about that day was speaking to Ted Grant on the phone. “He’d been my hero for 60 years”, he said. After being demobbed, Bill trained to be a Maths teacher, working in Birmingham and in Northumberland, where he lived with his wife Mary (a relative of Emily Wilding Davison) and his children Jonathan and Amanda. He also developed a love of sailing, which resulted in his nickname: the Ancient Mariner!

After losing contact with the Tendency when he joined the air force, Bill made contact with the Marxists in the Labour Party grouped around Militant after Amanda and Jonathan joined the LPYS. He bought a copy of the Militant and, after reading an article by Ted Grant, he was heard to exclaim “Ted Grant! I know Ted Grant!” He played an important role in the Blyth area as the Militant was beginning to take off. In the 1991/1992 split with the ultra-left majority of the Militant leadership, Bill immediately sided with the Opposition around Ted Grant and Alan Woods and played a role in national meetings of of Socialist Appeal at the time when the new journal was being developed and the basis for a new Marxist tendency was being formed.

One photo that regrettably was never taken was of Bill at the Durham Miners Gala, leaning against the side of the stage chatting to Tony Benn, who was a few months younger than Bill. Bill loved the Gala: the crowds, the brass bands and the banners, and was a regular for many years until the full-on day became just too much for him.

Bill’s interest in theory was second to none, in particular he read and re read Reason and Revolt written by Ted Grant and Alan Woods, as well as reading Eric Lerner’s book, The Big Bang Never Happened many times. He was delighted in 2009 when the North East Comrades presented him with a first edition copy of Where is Britain Going by Leon Trotsky, published in 1925. He remarked at the time that he was only a baby when it came out, so hadn’t read it at the time.

Bill always said that he intended to see world socialism and had informed his doctor of this. He was always a great example to the young comrades, particularly for his enthusiasm. He was a regular at the Socialist Appeal sellers conference, where he would make stirring speeches in a powerful voice. Bill’s memory began to fail a couple of years ago and he wasn’t able to live independently. But he could still remember comrades and took great delight in trying to teach his carers how to speak French.

A stalwart of the movement

We all loved Bill, he was a larger than life character with a firm grasp of Marxist theory, combined with what can only be described as a dapper appearance: complete with white cap, cravat and driving gloves. Comrades remember his fast cars screaming past us on the way home from a meeting. A boy racer to the end. He was also a fine canvasser, although many Labour Party agents got frustrated by his in-depth discussion of politics with people on the doorstep.

Farewell, comrade Bill, we will never forget you, and the optimism and determination that you lent to the fight for world socialism for over 75 years. You were part of a generation of pioneers who have slowly faded away physically, but whose legacy inspires us now and will move millions in the struggle for a socialist future.

We offer our sincere condolences to Amanda and Jonathan, and their families.