Honduras
Share
Tweet
The influence of the International Marxist Tendency (IMT) continues to spread across Latin America. A few days ago a meeting of 60 people from different left groups gathered to hear speakers from the IMT explain the ideas of Marxism and several requested a follow up to this with a programme of political education for trade union members and youth.

The world crisis of capitalism and its impact on dependent economies like those of Central America has been the straw that finally broke the camel's back of workers' patience. The movement around the recent 38-day hunger strike by Honduran prosecutors, the national civic strike movement and the huge participation in the demonstration on labour day are all clear examples of this. 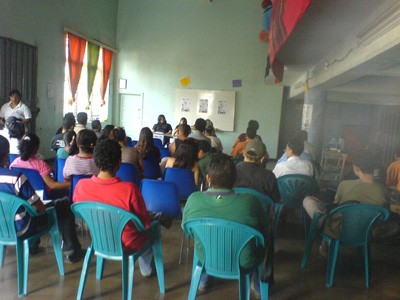 As Marxists we are duty bound to defend and spread the ideas that help the movement to reach its goals. That is why we organised a public meeting on June 21 in the centre of Loyola on the class struggle in Latin America. We started at 10am with only a few people to begin with, but gradually more and more people arrived. Some of them mentioned that they had only found out the day before and would have brought more people if they'd had more time. The presence of workers, trade unionists and youth reflects the thirst for the ideas.

Many say that Honduran Society is apathetic and conservative, but if that were so then we wouldn't have attracted the 60 people we counted. These included several organisations, the Popular Block (Bloque Popular), the Honduras Cuba Friendship Society (la Asociación de Amistad Honduras Cuba), the Youth Network of COFADEH (Committee of Relatives of Detained and Disappeared in Honduras), the Revolutionary Tendency, University Action, Popular Morazanista Youth, the Union of Socialist Students , the National Agrarian Institute Workers' Union (SITRAINA), Terra Nuestra (Our Land) and the URP.

The crisis of capitalism and its consequences in Latin America

The discussion was opened up by comrade Napoleón Grande who explained that we can't separate a country from the international context in which it is immersed. We can see how the capitalist regimes have not been in a stable situation since the 1990s, and the effect of this has been a tough blow to the working class. Placing this in the Salvadorian context he explained how in the last few years the purchasing power of the Salvadorian workers has been squeezed. One of the consequences of this has been the high level of emigration: more than 2.5 million Salvadorians have left the country, with 81% of these going to the USA. Salvadorian poverty has reached barbaric levels, with 41% of Salvadorian families living on $2 a day, and 19% on only $1. However, the comrade did not ignore the struggles that are taking place to change the situation. "Look at the bakers, a sector that has spent decades without speaking out, but is doing so today in an unprecedented manner. In their first demonstration they had 7,000 people. On the second strike they did not have as many people, but it was a qualitative change, with the spreading of our ideas posing the need for a general strike. Many workers believed that this was correct..." 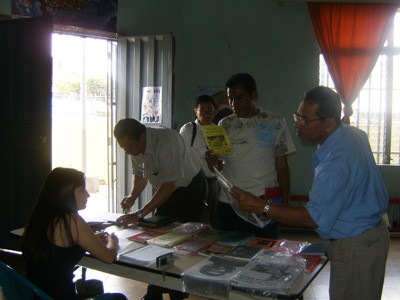 The comrade also clarified the role of the traditional parties and organisations and our policy towards them. "In El Salvador the FMLN is the party that represents the aspirations of the masses for change and they will use this tool until they exhaust it or they change it. We cannot permit ourselves to have an incorrect policy towards the party. It does not have a socialist programme, but we cannot tell people not to vote for it in the next elections, as this would isolate us from the masses. We must call for a vote for the party and fight for a socialist programme once they are in power. Moreover, we the communists aren't strangers to the workers' party, we don't have separate interests; on the contrary we are its most radical wing!!!"

After this he handed the floor to Comrade Ricardo Ayala, who, after acknowledging those present, went on to talk about the various Latin American struggles, including Bolivia, Mexico and Venezuela, explaining how the masses had fought vigorously to change society, but had lacked an authentic revolutionary leadership at the head of their organisations.

The debate was crammed with a huge number of questions and contributions. The speakers moved touched on questions such as how to deepen the revolutionary processes to the methods necessary to carry it through. There were many questions about the FMLN. The comrades explained that as long as we do not yet have the strength to overthrow bourgeois democracy we have to use it, but in a revolutionary manner to reach out to the working class, giving the example of comrade Manzoor who used the Pakistani parliament to lead workers' strikes, as well as explaining that the bourgeoisie will not give up power peacefully. This was not an argument in favour of the method of guerrilla struggle. There must be fighting committees of the workers, but these must be subordinate to the methods of workers' struggles, such as demonstrations, general strikes, etc. 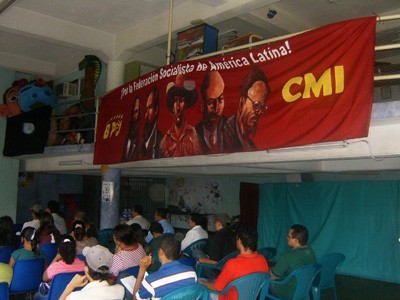 Developments in Mexico attracted the attention of those present who posed several questions. They explained that Mexico is a landmark of struggle for the Honduran people. They also asked how the victory of Felipe Calderón could have come about. Comrade Ricardo explained the heroic struggle of the Mexican people and made clear the important task of the building of a revolutionary leadership, which was lacking at the time. He explained that the movement towards revolution is not a straight line, but includes periods of reaction such as that which followed the assassination of Madero and the government of Victoriano Huerta in the Mexican revolution at the beginning of the last century.

Comrade Ricardo at the end of the discussion made reference to a Central American Jacobin born in Honduras saying: "As Francisco Morazán was driving the bourgeois revolution forward in a radical manner; the bourgeoisie was already betraying and dividing Central America into little unviable states. They cut through its living body and divided it among themselves. The bourgeoisie has had 200 years to govern our countries and has converted a paradise into a hell for millions of people. It is necessary for another class to govern society, the working class. The unity of Central and Latin America will only be achieved on the basis of a Socialist Federation."

Build the forces of Marxism 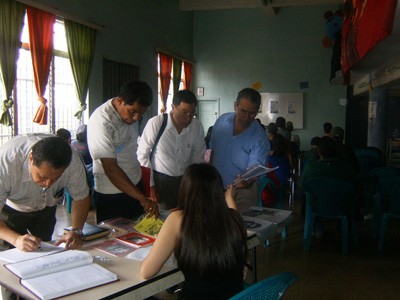 To finish off the discussion Comrade Napoleón called on those present to visit the web site of Militante to sign the resolution of support for the FMLN and the BPJ. This wasn't just an abstract appeal and the comrades present asked us to repeat the details many times. Signatures were also collected for the five Cubans imprisoned in Miami. Among those present there were many young people but there were also veterans of the movement, and they congratulated us one by one at the end of the meeting. They were interested in getting our help by developing political education for their particular unions and there were also some young people interesting in developing the discussion. Truth is a stubborn thing and eventually it will be heard. The thirst for ideas was demonstrated by the sale of political material: we sold nearly 70 US dollars' worth of literature, including 45 books and pamphlets.

There is no doubt that the Honduran youth and workers face some hard battles ahead for their freedom. Capitalism is not eternal, nor will it fall automatically. Without doubt we must build a strong leadership using the authentic methods of Bolshevism that will go a long way towards the completion of the historic task of the working class, the Socialist Revolution. This will be the prelude to a process leading to the formation of the Socialist Federation of Latin America.

Join the International Marxist Tendency to build the leadership that the workers movement needs!

Read this article in Spanish.