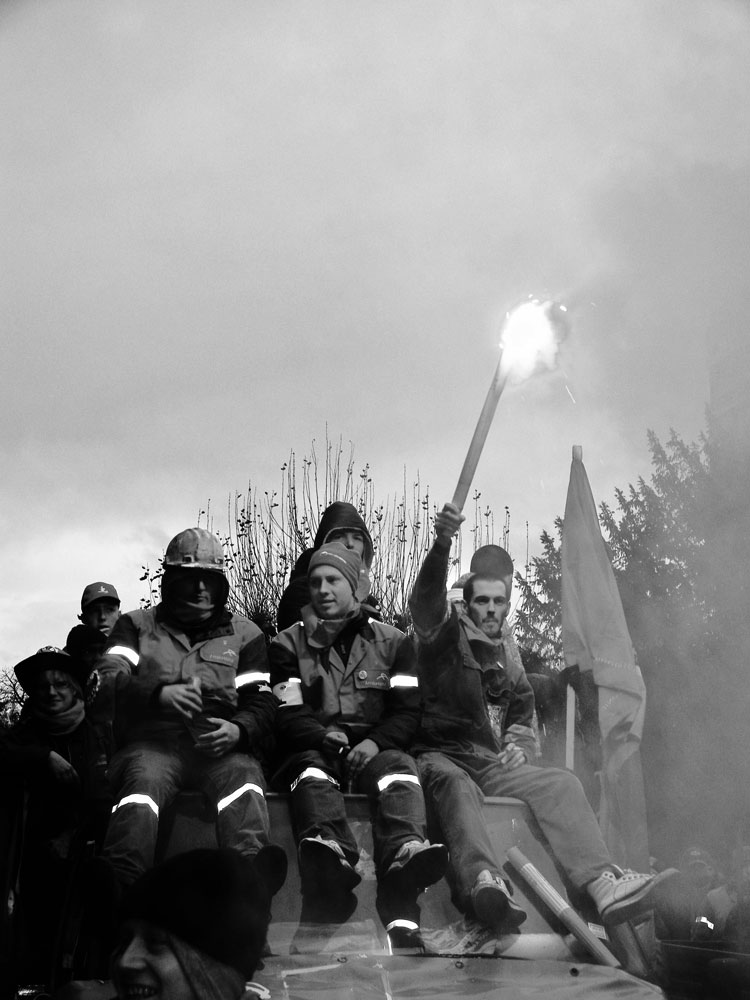 The water cannons and flash-balls1 used by the police in Brussels, Namur and Strasbourg were not enough to cool the anger of the Walloon steelworkers.  Images of the steelworkers in violent clashes with the police have been circulated internationally. Their anger erupted after the steel giant ArcelorMittal said it would close seven of the twelve cold processing facilities in Liège, eliminating 1300 jobs.

This comes after it was announced a year ago that it would permanently end liquid-phase steel production in the city, slashing 800 direct jobs. At that time it led to the first ever joint strike action in the ArcelorMittal plants in Belgium, France, Germany and Spain. The whole city of Liège was paralysed that day and 40.000 took to the streets.

In total it is estimated that some 10.000 direct and indirect jobs are to be lost as a result of these new closures.  It will be a social disaster. In addition, the unions have warned that cold-phase steel production without the warm-phase would sooner or later lead to the disappearance of an industry that was founded two centuries ago. This is particularly bad news in a region where official unemployment affects one fifth of the working population, that’s an unemployment rate of 20%.

When the Indian steel baron Lakshmi Mittal took over the Arcelor plants in 2005 and reopened one of the blast furnaces in Liège in 2008, he was hailed as a saviour. Now he is reviled by everyone. In the rest of Europe Mittal has mothballed blast furnaces in Florange in France and in Eisenhuettenstadt in Germany.  This present capitalist crisis of overproduction is seriously affecting the steel industry on the continent, exacerbating competition between producers.

The decision to close these facilities has surprised the regional and federal government. The socialist Prime Minister, Elio Di Rupo, got the news just as he was praising an innovative tax incentive, the notional interest deduction, at the World Economic Forum in Davos. This tax incentive is promoted by the Belgian government as a means of attracting capital investment to create jobs. It has generated a lot of profit and very few jobs, apart from jobs for ‘fiscal engineers’ … Rapidly Belgium has become a fiscal paradise for wealthy people and multinationals.  As Business Week2 wrote ten years ago, the country ‘has become a Cayman Island without the island’.

It is not for nothing that Laskhmi Mittal is known by fiscal specialists as being the ‘king of the notional interest reduction’. Just like other leaders of multinationals he has been pampered by successive governments.  In exchange for limited commitments to invest in ArcelorMittal Liège he has benefited from lavish tax hand-outs. In 2009, the steel giant paid NO taxes in Belgium. In 2011 barely 936 Euros were paid. An exact figure is not known but it is estimated that Mittal saved two or three billion Euros in taxes.

If Belgium has become a tax heaven for billionaires, it is a tax inferno for ordinary workers.  In reality, the chauffeur of Lakshmi Mittal pays more taxes than his boss.  Besides this, Mittal has also received an additional 260 million Euros in CO2 emission rights in exchange for keeping the fires lit in the blast furnaces of Seraing and Ougrée, two steel facilities near Liège.  This expensive bill was paid by the regional Walloon government. Mittal traded these emission rights with profits a few months later… How easy it is to cheat a government especially if that same government puts all the fiscal tricks that can be used to cheat the government at the disposal of the multinationals! This is fuelling the anger of the workers.

The socialist steelworkers and white collar unions (MWB and Setca) in Liège have responded to the new closures with a call for immediate nationalisation by the regional government. This is a very correct demand which had already been raised a year ago when the blast furnaces were closed. ‘The factory is ours’ is a slogan on the socialist union banners. The struggle against this social bloodbath does indeed need a political perspective. The Christian union (CSC) does not raise this demand but hopes to attract a new private industrial player.

The government ministers breathe fire. On behalf of the regional and federal government, Prime Minister Elio Di Rupo declared that he would not ‘accept the closure’. He has considered the possibility of nationalising the plant. Even the very liberal minister Didier Reynders pleaded for a ‘temporary nationalisation’ of the facilities. But until now these fiery statements have not brought about anything in practice. They have just been words.

The left wing Workers Party of Belgium (PTB of Maoist origin), which gained 6,5 % of the votes in the recent council elections in the city of Liège and up to 14 % in the surrounding steel towns, is demanding the immediate seizure of the plant as an urgent social need in exchange for one symbolic Euro.  The electoral results of the PTB are in themselves an indication of a mood of radicalisation and a growing questioning of capitalism.

Also in France the Minister for Economic Recovery, Montebourg, has threatened the nationalisation of the blast furnaces of ArcelorMittal in Florange, a demand that has been raised by local union branches and activists in different struggles. Then he backed down. But these political reactions, and in particular the union support for nationalisation, are signs of a changing and radicalising mood. We would add that nationalisation should be done under democratic workers control and management. Moreover, the nationalisation of one (although important) plant should be followed by more nationalisation with the aim putting the main levers of the economy under public ownership and control.

Following a meeting between the federal and Walloon Government a ‘Task Force’ has been established.  The Joint Declaration says nothing about a possible nationalisation. However, it is "the priority of the Walloon Government to find an industrial player to take over the plants of ArcelorMittal’. The Liège unions seem to have put their plan of action on the back burner in favour of the initiative of the government. The European Commission will be contacted to guarantee "better control of imports from non-EU countries by companies and countries that do not respect the rules of fair competition”.

When asked if he (Lakshmi Mittal) would be ready to sell his plants in Liège, he rejected that possibility. Mittal is not disposed to selling to a private industrialist or to the government. So if he is not ready to sell, the government should just confiscate his assets. In reality they have already been paid for by the lavish hand outs of previous years.

European ministers and the European Commission have now ‘asked’ Mittal to ‘postpone’ his reduction of steel capacity in Europe. The steel company replied that it did not want to delay the necessary closures and job cuts.  So this is the end of the story for the EU. The European Commission, which is so ruthless when it comes to slashing workers’ rights in the Union and imposing severe cuts in government budgets, is very compliant when it comes to the interests of the capitalists.

So the initiative is now back in the hands of the unions. An all European meeting of union shop stewards should be convened to discuss a strategy for nationalisation of the steel factory.  Left wing parties such as Die Linke, Front de Gauche, Izquierda Unida and PTB should be asked to support this demand and participate in a Europe-wide campaign. Lobbying of the EU or government ministers is completely inadequate.  A 24-hour general strike in all of the sites around the demand of nationalisation of steel making under workers control would undoubtedly be a new step forward.

1 Look up flash-balls on Google and see the weapons the ruling class is developing to contain social unrest.

2 If You're Wealthy, This Must Be Belgium, Business Week