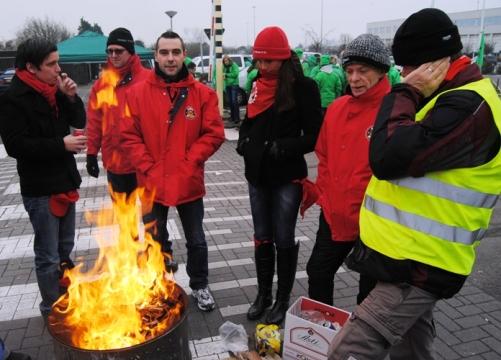 On January 30 the three Belgian trade unions called a 24-hour general strike in both the public and private sectors. It was the first general strike since 1993. The immediate background was the public sector general strike on December 22 against the austerity measures of the new Socialist Party government led by Elio Di Rupo.

The general strike was preceded by more than 500 days of negotiations between the various parties attempting to form a government. Just a few days after the [francophone] Socialist Party along with the Liberals and Flemish Conservatives and Christian Democrats formed a government supported by the Flemish Socialists together with the Liberals and Conservatives and Francophone Christian Democrats, the attacks started. This government of six with representation from the three major Belgian political families has launched the biggest package of austerity measures in 30 years. As usual the excuse is simply that these are the demands of the European Commission and they are needed to “calm the markets”.

The Socialist Prime Minister launched a plan of "strictness”, in his words, to achieve a debt reduction of nearly 100% of GDP. The principal measure is cutting social benefits for the unemployed and raising the age of early retirement for all workers, as well as the effective age of retirement. Increasing the effective age of retirement has triggered anger among workers. This is unsurprising given that three quarters of workers aged 55 to 65 suffer from some form or other of chronic disease. The Director of Social Security has spoken of an “epidemic of musculoskeletal disorders and mental health deterioration of workers”. He adds that the number of invalids has constantly increased since 2004. A shop steward of an engineering company testified: “I know of no colleague of 58 years or older who is not either sick or dead due to working conditions.”

Unilateral government decisions with almost no dialogue have outraged unions who are used to a model of social consensus that the current capitalist crisis has shattered. The ranks of both the Christian and Socialist trade union federations are in full debate about the nature of these cuts. Everyone knows that soon there will be a flood of new cuts. The main attack will be against the automatic increase of wages as inflation goes up (sliding scale of wages). Their basic aim is to remodel the labour market in Belgium along the lines of the low-wage German model.

The current government of partial “national unity” is politically weak. For now the unions are merely demanding less harsh cuts, but mobilisations like the one we have just seen will lead to an avalanche because the economic conditions in 2012 will only get worse as shown by the mass layoffs in large industrial groups such as Bekaert [which produces cut wire for solar panels]. The economy is now officially in recession. The “boom” of 2010-11 did not absorb the unemployment created by the 2008 crisis. Youth unemployment is very high, particularly among the children of immigrants. Workers who return to work will be taken on in conditions worse than those before 2008. The situation is moving clearly towards a social explosion.

Before the strike was called on January 17, the media, both public and private, had mounted a concerted campaign against the labour movement, especially against workers who go on strike and the more militant sections of the labour movement, with reports aimed at embarrassing the pickets with stories about excesses and other lies all over the media.

Reports indicate that the strike was successful: energy consumption indicators on the first major cold day of winter fell by more than 10%, none of the 4000 trains a day moved, the rest of public transport was paralyzed, the second port in Europe, Antwerp was completely closed, all the large and medium enterprises were on strike, the shops were closed, the logistics sector and private transport were severely disrupted and there was a strong participation of public service workers. This was not what the media highlighted, however, preferring instead to concentrate on anecdotal information. The media campaign in fact reflects the fear of the ruling class faced with such a powerful strike.

A battle plan is necessary

The strike successfully mobilised the active sectors of the labour movement. It had a galvanising effect on the left of the unions, but what is required is a much more ambitious plan than merely asking to be at the negotiating table. For now, the general secretary of the Socialist Walloons metalworkers’ union, Nico Cue, has spoken of the need for a 24-hour strike, followed by one of 48 hours, then 72 hours and then all-out. It is a concrete plan of struggle and mobilisation but this debate should be launched within the two major unions linked to the idea of a total rejection of the cuts. Workers have already paid enough for this crisis. The socialist parties must break with the coalition government and join the trade union movement in mobilising opposition.

Local committees based mainly in Brussels organised the strike and encouraged the mobilization and linked the struggle in the factories and workplaces with that of the students and the unemployed. Correctly these committees have issued a call to reject all cuts, unlike the trade union leadership.

This strike was a first step, but now the Belgian unions need to mobilise for a 48-hour general strike and call for a wider mobilization, following the call of the European Trade Union Confederation (ETUC) on February 29 as the next concrete step in a plan of struggle.